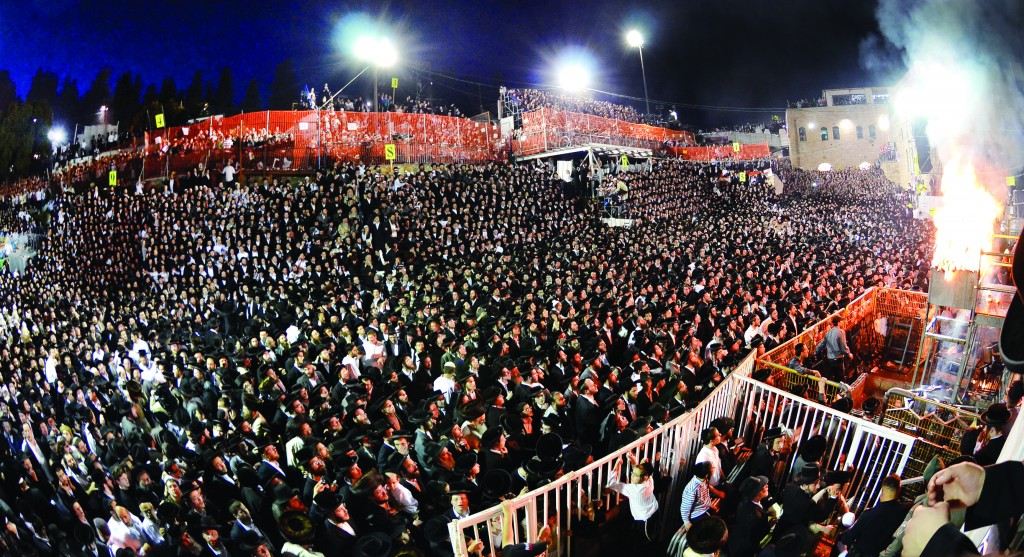 An estimated 450,000 Jews from across Israel and the world flocked to Meron to celebrate the hilulah of the Tanna Rabi Shimon bar Yochai, with fervent tefillah inside the building over the kever and ecstatic singing and dancing outside.

It was a challenging endeavor, as a traffic breakdown left hundreds of buses stranded for hours. Thousands of people decided to get off the vehicles and crawl their way up on the sides of the road in the dark. On their way home in the morning, the crowd was left standing in the heat in sweltering parking lots, with thousands trying to get onto each bus that opened its doors.

On Sunday, thousands were stranded in Meron waiting for buses to make it up the mountain and drop off their passengers, so they should be able to take on people returning. The heat was oppressive, and the drinks are prepared near the tziyun for all to enjoy. However, the parking lots are down the hill, and people, including women and children, waited there endlessly in the heat without anything to drink.

People who left on buses from Bnei Brak at 9 p.m. Motzoei Shabbos reported that they did not arrive at Meron until 3 a.m., six hours later.

On an ordinary weekday, it takes 10 to 15 minutes to travel by bus from Tzfas to Meron.

On an ordinary Lag BaOmer, on crowded roads, it takes about an hour.

This year, it took close to three hours.

Rav Dovid Klein, formerly of Baltimore, now a resident of Tzfas, boarded a bus at 11 p.m., Motzoei Shabbos, planning to arrive at the kever around midnight, spend a couple of hours there and return home by 2.

But in one of the worst traffic jams he had ever seen, it took three hours for the bus to reach Meron. Then, when he and his son prepared to leave, at about 2 a.m., there were no buses to be found in the bus park.

“No buses at all,” he said. “The transportation completely collapsed.”

So, they just started walking, hoping for the best. Finally, they reached the Ein Zeitim junction, where they got a ride home in a private car. It was 6:30 a.m. when they walked in the door of their house.

On Sunday afternoon there were numerous reports of buses overheating on the way from Meron. One passenger speaking on her cellphone to Hamodia said that the bus she was on had just made the fifth unscheduled stop because of overheating.

The large numbers of police on duty were unable to cope. The roads and sidepaths leading to and from the kever were choked with thousands and thousands of visitors making their way on foot and preventing the buses from getting through.

“My theory is that they had three or four times the number of people they had planned for, and the transportation system just totally collapsed.” Although he did not make a formal crowd estimate he did notice that areas of the site which in former years were only partially or lightly filled, were this year almost as packed as at the kever itself.

“They said they were expecting half a million; I’d say there was much more,” he said. “And because it was Motzoei Shabbos, everyone left as soon as they could after Shabbos, and they all converged on Meron at the same time.”

However, it was noted that Lag BaOmer two years ago also fell on a Motzoei Shabbos, yet the police and organizers handled the same influx on that night with no comparable problems.

When Hamodia (Hebrew) reporter Yaakov Reinitz contacted the Traffic Police spokesman for an official comment on the failure of the police to have the traffic run smoothly, he was met with a bland denial.

“I don’t know of any collapse,” he said. “Try calling the Northern District.”

The Northern District of the police had always been in charge of Operation Meron. Five years ago, after a similar collapse in the flow of traffic occurred, the police decided to remove the event from the responsibility of the Northern District and give it over to the Traffic Police. Ever since then, the operation went off without a hitch.

This year it was also under the responsibility of the Traffic Police, and it is they who obviously failed where they had previously succeeded.

United Torah Judaism MK Uri Maklev termed it “the mother of all collapses. No explanation could excuse this result,” Arutz Sheva quoted him as saying. “This is what advance preparations were for.”

“We will draw conclusions and hold those responsible to account,” he added.

Despite the chaos, on the way to and from the tziyun, the simchah and hisorerus in the makom kadosh was as powerful as ever.

Rav Klein observed, “Lag BaOmer always comes out on the same day of the week as Purim, which indicates that there is some connection, that Lag BaOmer has some of the flavor of Purim to it. Anything can happen.”

He described the atmosphere on the bus on the way to Meron, which was merry despite the delays and overcrowding on the bus, with many standing in the aisles.

“There were four bachurim, they didn’t look chareidi, maybe traditional. When they tried singing one of the Bar Yochai songs, they didn’t have the lyrics straight. So I stopped them, and had them sing the lyrics in the right order after me. A guy next to us pulled out a melodica, a keyboard instrument with a mouthpiece, and passed around simple percussion instruments. Soon those bachurim were standing on their chairs singing. It was really nice.”

Rav Klein told Hamodia late Sunday morning that he was preparing to go back to Meron for more, though he was hopeful that by then traffic had been brought under control.

“When the Ohr Hachaim Hakadosh came to Meron, it took him two weeks riding on a donkey. Then he climbed the mountain on his own, weeping and moaning all the way that he wasn’t worthy of this holy place. So how can I complain about a little traffic jam?”