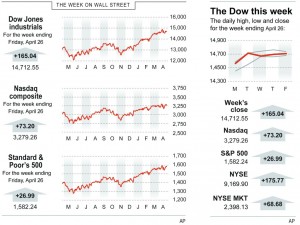 The stock market stalled Friday after the U.S. economy didn’t grow as much as hoped and earnings from a handful of big companies failed to rev up investors.

The economy grew at a 2.5 percent annual rate in the first three months of the year, the government said. That was below the 3.1 percent forecast by economists.

The shortfall reinforced the perception that the economy is grinding, rather than charging, ahead. Investors have also been troubled by reports in the last month of weaker hiring, slower manufacturing and a drop in factory orders. Many economists see growth slowing to an annual rate of around 2 percent a year for the rest of the year.

“There are some concerns as we head into the summer,” said JJ Kinahan, chief derivatives strategist for TD Ameritrade. “In the last three weeks, we’ve seen numbers that weren’t exactly what you’d love to see.”

Three stocks fell for every two that rose on the New York Stock Exchange.

Both indexes were up for the week and remain slightly below their all-time highs reached April 11. The Dow index rose 1.1 percent this week while the S&P gained 1.7 percent.

The market has been bolstered by the Federal Reserve’s easy money policy. The disappointing growth figure for the economy will ensure that the Fed sticks with its stimulus policy, providing support for stocks, said Peter Cardillo, chief market economist at Rockwell Global Capital.

“The economic data that we’ve been getting points to no early exit for the Fed’s stimulus,” Cardillo said.

The tech-heavy index has lagged the Dow and the S&P 500 this year, but it led the way higher this week, boosted by Microsoft. The software giant, which makes up 5.3 percent of the Nasdaq, recorded its biggest weekly gain since January of last year — up 6.8 percent. It reported earnings on April 19 that beat Wall Street expectations. The company also began an aggressive push into the computer tablet market.

Apple, the largest stock in the Nasdaq, also had a good week. The stock rose 6.8 percent to $417.20, its best weekly gain since November, despite posting a decline in quarterly profit on Tuesday. Apple accounts for 7.6 percent of the Nasdaq composite.

Among other big names investors focused on:

Amazon.com fell 7 percent to $254.81 after the company warned of a possible loss in the current quarter. The online retailer also reported lower income for the first quarter as it continued to spend heavily on rights to digital content.

Expedia fell 10 percent to $58.56 after the online travel company reported a quarterly loss.

Homebuilder D.R. Horton surged 8.7 percent to $26.66 after its income nearly tripled thanks to a continuing recovery in the housing market. The results handily beat the forecasts of financial analysts who follow the company.

J.C. Penney jumped 12 percent to $17 after the billionaire financier George Soros disclosed that he had taken a 7.9 percent stake in the struggling company.

In government bond trading, the yield on the 10-year Treasury note slipped to its lowest rate of the year, 1.67 percent, from 1.71 percent the day before. The yield has fallen from 2.06 percent six weeks ago as traders move money into lower-risk investments.

The dollar weakened against the euro.

The European currency bought $1.3029 at the end of day, compared with $1.3002 the day before. The ISE dollar index, which measures the U.S. currency against a group of other world currencies including the Japanese yen and the euro, dropped 0.3 percent, to 82.48.

This article appeared in print on page 8 of the April 29th, 2013 edition of Hamodia.