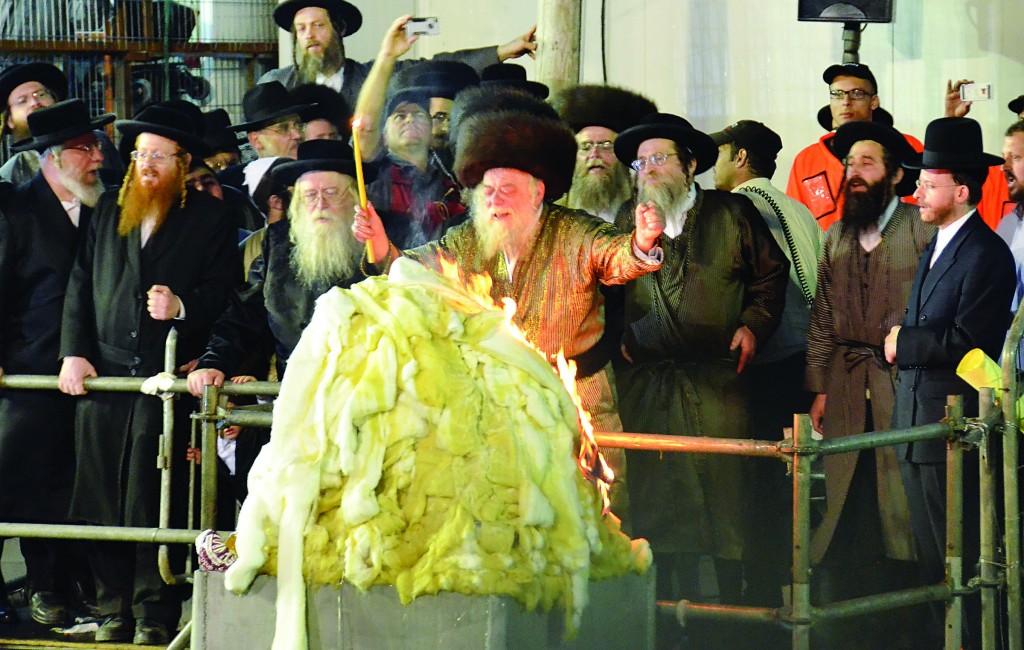 An elevated sense of spirituality envelops the peak of Mount Meron, influencing the tens of thousands of people who came to spend Shabbos at the tziyun of Rabi Shimon Bar Yochai. Already early on Friday, streams of people made their way up the mountain.

“Going up to Meron,” are words that express the special spiritual elevation at this site. It is very different from the literal ascension to Mount Meron; it is not just a trip for Shabbos, it is an aliyah, a spiritual journey upwards.

Anyone approaching the site immediately feels the “Yachad Shivtei Yisrael,” the unity, the togetherness of so many people from all different streams and communities. Chassidim from numerous courts, as well as talmidim from a wide range of yeshivos, young and old — they have all come to spend this time together, to imbibe the holiness and purity of the site. Throughout, they repeat to themselves the well-known statement made by the Beis Aharon of Karlin, zy”a, “Anyone who has faith in Rabi Shimon Bar Yochai, has chizuk in Rabi Shimon Bar Yochai, and just like Hashem Yisborach is for everyone, so too, Rabi Shimon bar Yochai is for everyone, even the lesser people.”

As this year Lag BaOmer fell on Sunday, the entire weekend turned into “Shabbos Lag BaOmer” and already on Thursday people began arriving, some of whom will remain until Monday morning.

Upon arrival, one disconnects himself from the physical clock, and gets swept up in the events around him, which transcend time. A heady feeling of anticipation hangs in the air. The combination of the holiness of Shabbos and the hilula of Rabi Shimon Bar Yochai makes for a fevered pitch of spiritual elevation.

The material preparations take no less of a prominent role than the spiritual ones, and devoted people work tirelessly to prepare for the Shabbos that leads in to the hilula. Wherever one goes, one encounters busy people getting ready for Shabbos, whether it is arranging sleeping areas or preparing the food for the tens of thousands of visitors.

The words of Chazal, “He who works on Erev Shabbos will eat on Shabbos” are clearly manifested here. The months of work that have preceded these few days are about to come to a conclusion with the sounding of the Shabbos siren.

The actual tziyun, as well as all the paths and courtyards that surround it, are packed long before Shabbos begins, with people saying Tehillim or other tefillos.

The scene of hundreds of sweet children gathering to recite Shir Hashirim at the tziyun is indescribable. A pen cannot describe the emotional excitement at the clear sense of unity at this moment as the children recite word for word of the beautiful sefer. Among the children are many boys with long curly hair, who are excitedly awaiting their first haircuts on Lag BaOmer.

As the sun sets and Shabbos envelops the entire mountain, a special feeling descends. Tefillos, songs, and zemiros of all kinds are heard, blending together as Klal Yisrael sings to welcome Shabbos at Rabi Shimon. The words of Yedid Nefesh, composed by Rabi Elazar Azkari, are recited with yearning and deep emotion, as the masses plead, “Maher ehov ki bah moed v’chanenu kimei olam.”

A Galilean chill envelops Mount Meron as the sun sets behind the mountains, and the scene gives a tangible sense to the disappearance of the partitions that divide Klal Yisrael, Hashem’s chosen nation.

Dozens of kehillos, Chassidic courts and communities each have their own place, in an organized fashion, to daven Maariv. Although the nuschao’s differ, and the tunes vary, the atmosphere of longing and holiness is the same among them all.

Once the Shabbos seudah ends, the entire village of Meron resounds with singing. Wherever you walk, you encounter groups of people sitting together, some of them with their Rebbes who have come as well.

Throughout the night and the next day, Shabbos, the tziyun is bustling constantly with people davening and reciting Tehillim.

As Shabbos comes to a close, Maariv is recited with a sense of holiness, followed by Sefiras HaOmer, 33, Hod She’behod, and the hilulah begins with the preparations for the central fire on the roof of the tziyun, which is ignited by the Boyaner Rebbe, shlita.

Thousands have already taken their places as thousands more stream towards the tziyun. The music begins playing from the amplifiers, and the Boyaner Rebbe approaches the place where the fire is prepared, holding the torch which he will use to continue the tradition passed down from his ancestors.

Who can observe the scene and remain emotionless? Here, the hearts unite in honor of the Tanna. This is an eis ratzon, as Klal Yisrael stands crowded together. Every stream is represented, coming from all over the country and abroad, but they are united as one. And they sing in one voice, “Toraso magen lanu u’meiras eineinu, hu yamlitz tov b’adeinu Adoneinu Bar Yochai…”

The description of “Simchas Torah outside, Yom Kippur inside” seems the most apt to describe the electrified atmosphere. Each year, people come, and each year, they are not disappointed by the emotions that rise up anew.

As I approach the tziyun, I am overcome by a question that surely many have: Is this the time to plead and daven on this holy day for yeshuos and brachos, or is it a time to rejoice together with the thousands of other people who are rejoicing?

And the answer seems self-understood as you walk into the courtyard of the tziyun, wending your way between the masses, you feel the spiritual elation at the Simchas Torah of Rashbi, the simchah shel mitzvah, and just a few feet away, as you approach the inner sanctum, your heart melts with tefillah and beseeching, along with the hearts of the masses around you, and you daven for the Geulah, pleading with Hashem, “Merciful Father, hear our voices on the hilulah of Bar Yochai.”