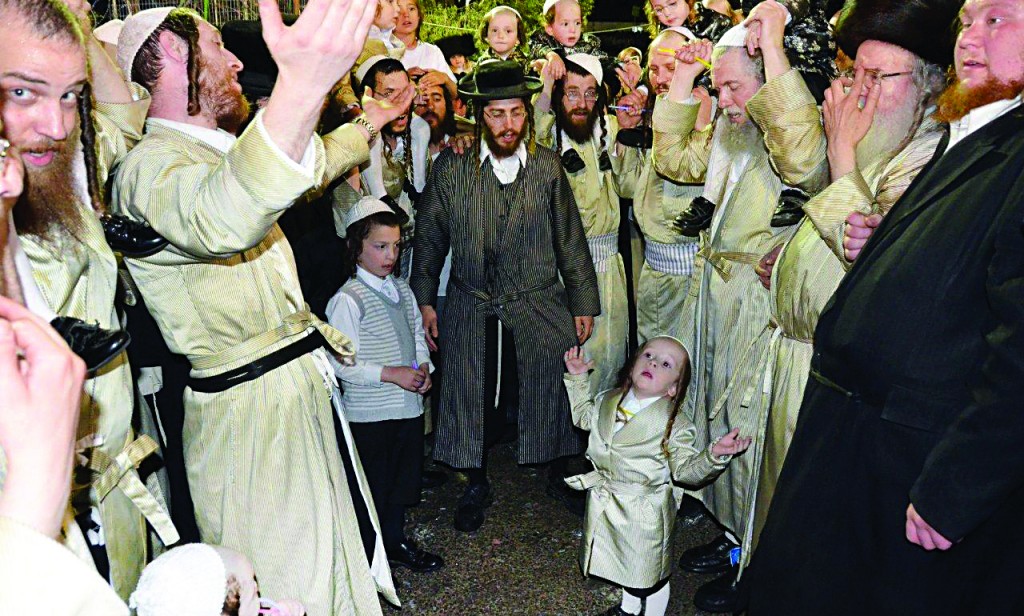 We were among those to spend Shabbos in Tzefas. Every nook and cranny was rented out, and all shuls were packed to capacity. Chassidim from different sects in Eretz Yisrael and abroad mingled with local Tzefas chassidim, as well as Breslover and Carlebach adherents; Lag BaOmer piyutim were sung in the shuls throughout the course of Shabbos.

The ancient narrow streets reverberated with Shabbos zemiros interspersed with “Bar Yochai.” Several kehillah leaders came to Meron and Tzefas for Shabbos with their kehillos and prepared themselves for the special celebration.

According to the locals, the number of Shabbos guests was unprecedented and signaled an unusually high Lag BaOmer pilgrimage from all over the country.

On Motzoei Shabbos, we boarded one of many overcrowded buses that were pulling out out Tzefas’s central bus station every few minutes, and were met by masses of people coming from all directions as we disembarked in Meron some 15 minutes later. We couldn’t help but be swept up in two predictable but nonetheless overpowering emotions — first, the spiritual energy that was palpable in every direction, and second, the awesome and welcome sight of the diverse types of people making their way energetically up the crowded path to the tziyun.

For anyone who has not been in Meron on Lag BaOmer, it is nearly impossible to describe the “ingathering of exiles” one sees there. The thought that came to my mind was that perhaps this was a microcosm of what aliyah b’regel — going up to Yerushalayim — was and will be in the near future.

Much has been said about the contrast between the rapturous singing, live music and spirited dancing accompanying the large bonfires outside of the me’arah to the somber Yom Kippur-like atmosphere permeating the me’arah. But try as I might, I cannot find words to capture the intensity or the uniqueness of the experience, despite having merited to be here approximately a dozen times, but only once before on Lag BaOmer.

Fighting to find a spot somewhere in the sea of swaying supplicants crowded together in the women’s section, I couldn’t help be moved to tears by the fervent and heartfelt tefillos pouring forth from the supplicants. As I turned my mind to my own tefillos, I felt a wave of spiritual energy accompanying all our tefillos, energy fueled by the achdus in that room, which stretched to embrace a crowd that it could not practically accommodate.

My feet, despite being sore and fatigued from close to six hours’ straight standing, remained rooted to whatever spot I had most recently been jostled to, willing the night — and its power — never to end.

But it did. And so, as the full moon started receding and fading, I reluctantly made my way down the hill to the bus depot. Why did the way out seem so much longer, I wondered? Progress was even slower than before because now I was going against the current; waves and waves of people were rushing towards the tziyun, many of them intent on davening Shacharis with the netz hachamah.

The bus depots were much farther than the drop-off points had been, and there were no signs or directions. Dozens of policemen in yellow reflector vests were on hand, answering questions and moving the crowds along. So far so good.

But when I finally reached the parking lot designated for Tzefas buses, I was shocked to see hundreds of people milling around, many nervous and impatient. It turns out that for a combination of reasons — an accident, a chefetz chashud (suspicious object) — service to Tzefas had been interrupted for close to two hours. After another long hour and a half, and with very little information from any guards, a bus finally showed up.

What happened next remains a very sad footnote to an otherwise uplifting experience. I witnessed such a frantic crush to get onto the bus that I was literally embarrassed. The police realized that they could not make order, so they stepped aside and allowed the shoving travelers to squeeze themselves into the bus in a chaotic fashion.

This scene repeated itself a few times, the pitch rising each time, until a woman fell to the floor and required emergency treatment, and was soon whisked away by a Zaka ambulance. At this point, the police lost all attempts at tolerance and began shoving the crowd aggressively.

Hoping to get home at some point, I stayed somewhat back because I didn’t want to crush or get crushed, but I couldn’t help thinking that I was more disappointed by the tired passengers than by the police. After all, it wasn’t Erev Shabbos, it wasn’t raining or snowing, it wasn’t even boiling hot then, so how could we justify the senseless panic and pushing?

My spirits — and hopes for the next generation — were restored when I overheard a mother telling her daughter on the phone not to worry — “There is a balagan, but we’re all safe and secure, and we’ll all get home at exactly the second Hashem wants us to be home. In the meantime, I will use this unexpected waiting time productively, and so should you,” she added, reassuring her anxious daughter, who had heard exaggerated reports. This clear-minded woman was young, articulate, and knew how to keep her head focused on the things that counted.

The bus driver waved away my ticket, indicating that it was not necessary. Obviously, the private bus company realized that they had to demonstrate responsibility for these mishaps, which truly took a toll on people.

Returning from an exhilarating Lag BaOmer in Meron, we were surprised to notice at least six respectable bonfires lighting up the streets of Rova Chet in Ashdod at close to 9:00 p.m. Sunday night (local time). So, despite the fact that it had seemed like everybody in Eretz Yisrael — not to mention thousands of tourists — was in Meron, apparently some Israelis celebrated in their hometowns.