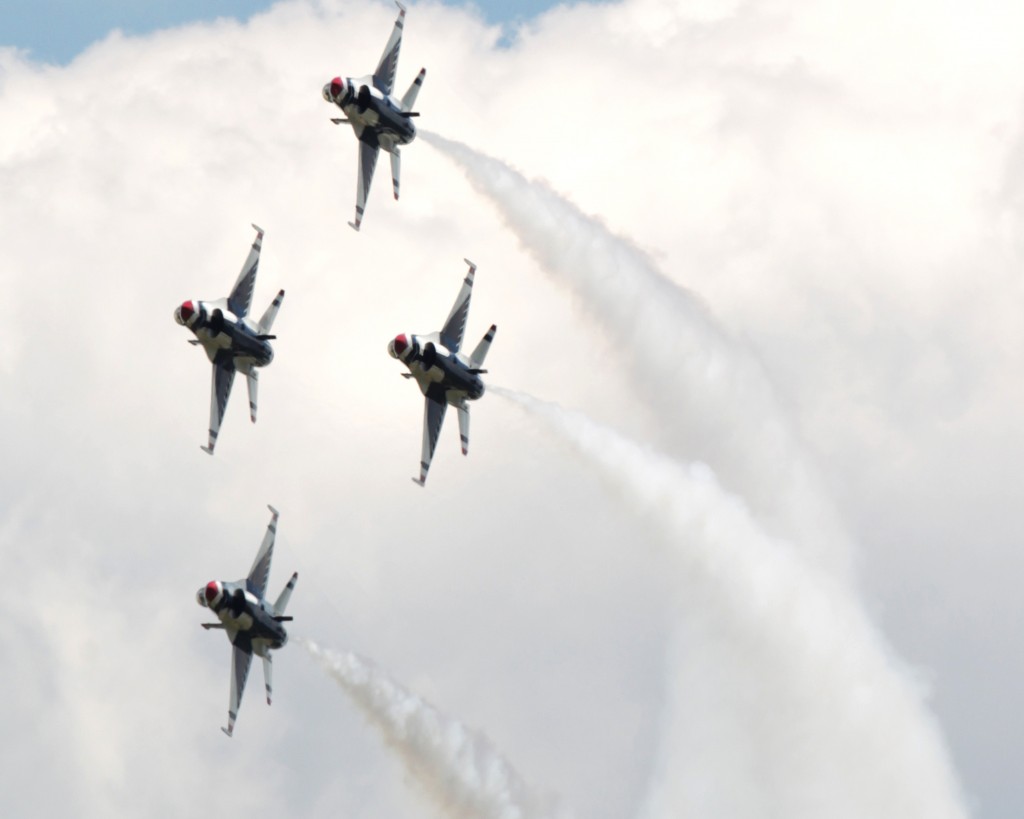 Dozens of air shows that draw tens of thousands of people and generate millions of dollars for local economies have been cancelled this year after the military grounded its jet and demonstration teams because of automatic federal budget cuts.

For years, the biggest draws at air shows have been the military’s two elite jet teams, the U.S. Navy’s Blue Angels and the U.S. Air Force’s Thunderbirds, and their intricate stunts. The armed services also have provided F-16, F-18 and F-22 fighter jets, and the U.S. Army Parachute Team, known as the Golden Knights. All the teams were grounded as of April 1 to save money, and the military also dramatically curtailed its help with ground displays of various aircraft.

Those cutbacks have affected more than 200 of the approximately 300 air shows held in the United States each year, said John Cudahy, president of the International Council of Air Shows. About 60 shows have been cancelled, and he expects more cancellations as the season progresses and hope for restoration of the budget cuts fades. He predicted 15 percent to 20 percent of the shows won’t return next year, even if the military begins participating again.

Local economies also will feel the sting of the cancellations without the air shows bringing in crucial tourism dollars.

Representatives for some of the nation’s biggest air shows, such as the air and water shows in Chicago and Milwaukee and the Experimental Aircraft Association’s AirVenture in Oshkosh, Wis., said they didn’t expect a lack of active military jets to affect their events. The Chicago and Milwaukee shows are held along the shore of Lake Michigan, where large crowds are expected to gather for a free spectacle; the Oshkosh event is primarily a convention of pilots and aviation enthusiasts, with an air show attached.

But organizers of other events said they expected such a dramatic drop in attendance that they felt they had to cancel.

Thunder over the Blue Ridge in Martinsburg, W.V., an easy day trip from Baltimore and Washington, won’t happen. The two-day show drew 88,000 people when the Thunderbirds performed in 2010, said Bill Walkup, one of the board members and manager of the Martinsburg airport.

Organizers also faced a challenge because the show had been hosted for the past few years by the West Virginia Air National Guard. After the Guard said it couldn’t do that because of budget cuts, organizers considered hosting the show at the civilian side of the airport — until the Thunderbirds cancelled.

“When this happened, it just put us out of business,” Walkup said.

Maj. Darrick Lee, spokesman for the Thunderbirds, said a typical season averages about $9.75 million, and the Air Force needs to focus its resources now on its mission in Afghanistan. Team members are still doing local public appearances that have little or no cost, he said.

“Would we prefer to be flying? Of course,” he said. But, he added, “We encourage folks to go and have a good time with or without us.”

Organizers cancelled the Indianapolis Air Show in February because of concerns the Blue Angels wouldn’t participate, said Robert Duncan, chairman of the show’s executive committee. The jet team makes a 25 percent to 30 percent difference in the gate admissions, and sponsors weren’t signing up as quickly because of uncertainty about the Blue Angels. The committee is trying to reinvent the show for next year, perhaps by adding a 5k run, carnival games or more civilian aircraft, Duncan said.

Many air shows, including those in Martinsburg and Indianapolis, benefit charities. They also generate millions of dollars in tourism, benefiting hotels, rental car companies and restaurants. Economic impact studies indicate the shows are worth $1 billion to $2 billion nationwide, Cudahy said.

Bob Anderson of Tallahassee, Fla. is among those whose businesses have been hurt. For more than a decade, he and his wife, Sandy, have sold Blue Angels and Thunderbirds T-shirts and other apparel at shows. In a typical year, they go to more than 20 of them and sales surpass $250,000.

This year, they went to two shows before the teams ended their seasons on April 1. Anderson, who is back to doing carpentry and home repair, said the loss of business also affects others— he spends about $90,000 a year on shirts, printing, embroidery and other supplies.

“The trickle-down effect is tremendous,” he said.

Air show organizers in many communities have been scrambling to avoid additional losses.

Curt Drumm, producer and co-founder of Thunder on the Lakeshore, in Manitowoc, Wis., said he has been talking to private owners of former military aircraft and to aerobatic performers to help fill gaps left by three smaller military teams. The event usually draws 70,000 people over three days and is an important source of income for local businesses and civic groups that run food and beverage stands.

“We still have an incredible lineup of civilian performers,” Drumm said. But, he acknowledged, “Without those big, noisy jets, it’s not quite the same event.”