Business After Near-Stall in Late 2012, US Economy Picks Up
Business 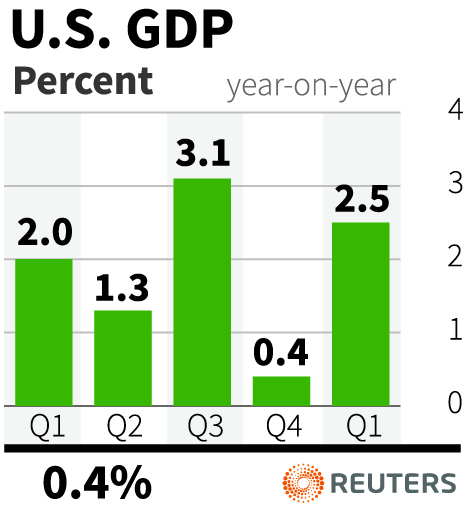 After nearly stalling in late 2012, the American economy quickened its pace early this year despite deep government cutbacks. The strongest consumer spending in two years fueled a 2.5 percent annual growth rate in the January-March quarter.

The question is: Can it last?

Federal spending cuts, higher Social Security taxes and cautious businesses are likely to weigh on the economy in coming months.

Most economists say they think growth, as measured by the gross domestic product, is slowing in the April-June quarter to an annual rate of about 2 percent. Many predict growth will hover around that subpar level for the rest of the year.

Friday’s Commerce Department report on GDP showed that consumers stepped up spending at an annual rate of 3.2 percent in the January-March quarter – the biggest such jump since the end of 2010. Growth was also helped by businesses, which responded to the greater demand by rebuilding their stockpiles. And home construction rose further.

Government spending sank at a 4.1 percent annual rate, led by another deep cut in defense.

Sal Guatieri, senior economist at BMO Capital Markets, foresees more improvement in the second half of the year.

“The second-half acceleration will be supported by improved household finances, pent-up demand for autos and the ongoing recovery in housing,” Guatieri says. “We are seeing significant housing-related consumer purchases in such areas as furniture.”

GDP is the broadest gauge of the economy’s health. It measures the total output of goods and services produced in the United States, from haircuts and hamburgers to airplanes and automobiles.

The government will provide two updated estimates of first-quarter growth based on more complete data. Whatever the revised data show, estimated first-quarter growth will likely remain far above the economy’s scant 0.4 percent growth rate in the October-December quarter.

In a healthy economy, with an unemployment rate between 5 percent and 6 percent, GDP growth of 2.5 percent or 3 percent would be considered solid. But in today’s still-struggling recovery, with unemployment at 7.6 percent, the economy needs faster growth to generate enough jobs to quickly shrink unemployment.

Since the Great Recession officially ended in June 2009, growth has remained weaker than usual after a severe downturn. In part, that’s because the recession followed the worst financial crisis since the Great Depression. The economy expanded just 2.4 percent in 2010, 1.8 percent in 2011 and 2.2 percent in 2012.

This had been expected to be the year when growth would finally reach a more robust 3-percent to 4-percent pace. But across-the-board government spending cuts, which began taking effect March 1, have made that unlikely. The cuts are forcing agencies to furlough workers, reducing spending on public projects and making businesses nervous about investing and hiring.

Unless Congress and the White House reach a deal to reverse them, the government spending cuts will continue through the end of the year and beyond.

Consumers’ take-home pay has also fallen because President Barack Obama and Congress allowed a Social Security tax cut to expire. A person earning $50,000 a year has about $1,000 less to spend this year. A household with two high-paid workers has up to $4,500 less. Consumers’ take-home pay is crucial to the economy because their spending drives roughly 70 percent of growth.

Americans appeared to shake off the tax increase at the start of the year. They spent more in January and February, powered by a stronger job market.

But hiring slowed sharply in March. And consumers spent less at retail businesses, a sign that many were starting to feel the effects of the Social Security tax increase. Economists expect spending to stay weak in the April-June quarter as consumers adjust to smaller paychecks.

Ben Herzon, an economist at Macroeconomics Advisers, thinks the tax increases could shave roughly 1 percentage point from growth this year. He expects the government spending cuts to reduce growth by a further 0.6 percentage points.

The drop in government spending cut growth in the January-March quarter by 0.8 percentage points.

Three-fourths of that decline came from defense spending. The past two quarterly declines in defense spending – at a 22.1 percent annual pace in the fourth quarter and 11.5 percent in the first quarter – have been the sharpest such back-to-back drops since the Korean War was winding down in the 1950s.

Many large developing countries are growing much faster than the United States. China’s economy expanded 7.7 percent in the first three months of the year compared with a year earlier – and that was a slowdown from its previous double-digit growth. Indonesia’s economy grew 6.2 percent in 2012, and India’s, 4.1 percent.

But among developed countries, the United States is still performing relatively well. Most of Europe is stuck in a second year of recession. Germany’s economy grew just 0.7 percent in 2012. France’s didn’t grow at all. Italy’s shrank 2.4 percent.

And in the January-March quarter, Britain grew at an annual rate of just 1.2 percent, less than half the estimated U.S. pace.

Last quarter, U.S. companies were more cautious about spending on computers, machinery and facilities, possibly because of the looming government spending cuts and higher taxes. Business investment grew at an annual rate of just 2.1 percent, down from a 13.2 percent rate in the fourth quarter.

That slowdown could hurt hiring in coming months. If companies buy fewer machines or build fewer stores or factories, they will likely fill fewer jobs.

U.S. income growth adjusted for inflation fell in the January-March quarter after a surge in the final three months of 2012. The fourth-quarter gain had reflected a rush to pay dividends and make bonus payments before higher tax rates took effect Jan. 1. Incomes were also held back last quarter by the higher Social Security tax. After paying taxes, incomes fell at an annual rate of 5.3 percent in the first quarter, after having surged 6.2 percent in the fourth quarter.

The jump in consumer spending, along with slower income growth, meant that the saving rate fell to 2.6 percent of after-tax income in the first quarter. That was down from 4.7 percent in the October-December quarter.

One area where consumers are feeling some relief is at the gas pump: The national average price for a gallon of gas has fallen by 29 cents since Feb. 27 to $3.50.

Cheaper gas helps the economy because it makes goods less expensive to transport and gives consumers more money to spend on other things. Over the course of a year, a decline of 10 cents a gallon translates to roughly $13 billion in savings at the pump.