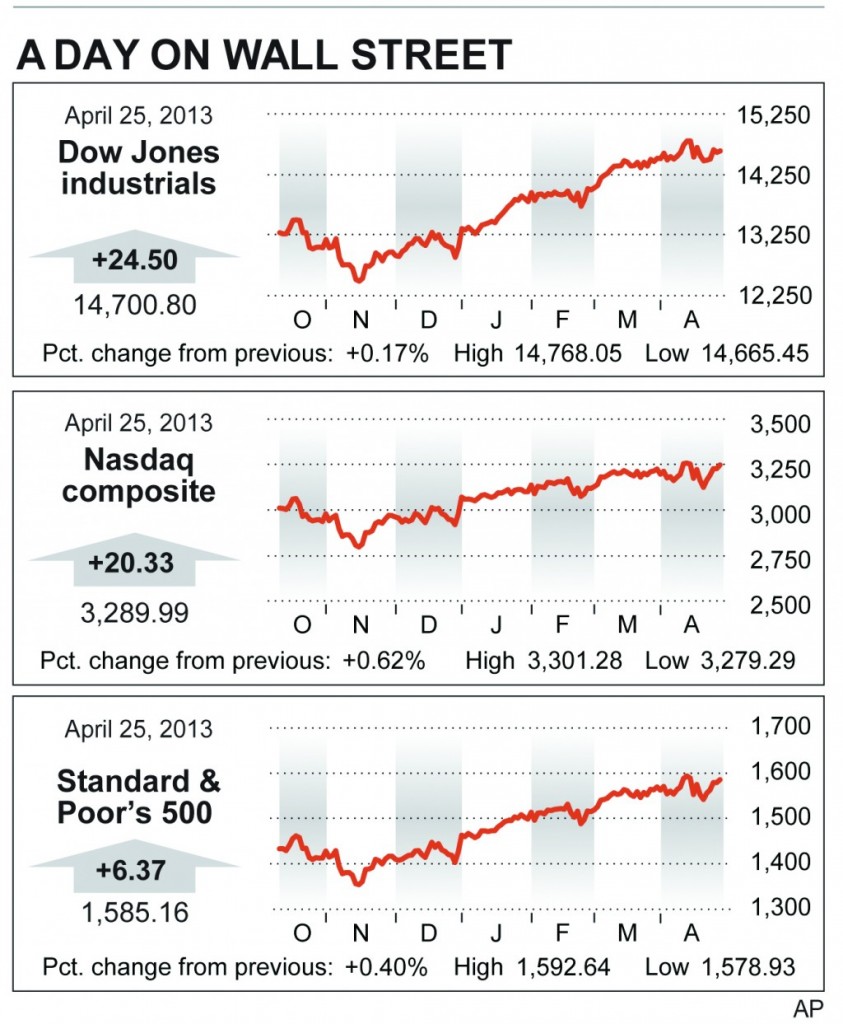 The engines driving the stock market were more tepid than turbocharged Thursday, but they were enough to help stocks rise for a fifth straight day.

The three major U.S. stock indexes all closed higher as good news on the job market and healthy earnings from name-brand companies like Royal Caribbean and Harley-Davidson encouraged investors.

The Standard & Poor’s 500 has risen every day since Friday, a record not matched since early March.

The forces driving the gains, however, were tenuous, market watchers said. Hiring remains sluggish, even with the drop in unemployment claims last week. The S&P’s five-day winning streak is hardly a blockbuster: on Wednesday it rose just .01 point. And while companies are turning in profits that are beating the estimates of financial analysts, many are missing revenue forecasts.

Weekly applications for unemployment benefits fell 16,000 to 339,000, the second-lowest level in more than five years, according to the Labor Department.

The good news for the job market comes after a series of setbacks. In March, employers added only 88,000 jobs, down from an average of 220,000 for the previous four months. The unemployment rate fell to 7.6 percent from 7.7 percent, but only because more people stopped looking for jobs.

The Dow Jones industrial average rose as much as 91 points before giving up most of that gain Thursday. Investors were underwhelmed by what turned out to be a mixed bag on earnings. The Dow closed up 24.50 points, or 0.2 percent, to 14,700.80.

The S&P 500 rose 6.37 points, or 0.4 percent, to 1,585.16. Nine of the S&P’s 10 industry groups rose, led by telecommunications. Verizon Communications, the biggest component in S&P’s telecommunications group, rose almost 3 percent to $53.22 following reports that the company could offer $100 billion to buy out Vodafone’s interest in their joint venture, Verizon Wireless.

The S&P 500’s last streak this long was March 1-11, when it rose on seven straight trading days.

Thursday’s earnings offered a mixed view of the economy, and mixed reactions from investors. Many companies have been reporting better first-quarter results, though the gains have come more from cost-cutting than from a strong economy.

So far, 71 percent of S&P 500 companies have beaten analysts’ profit expectations for the first quarter, according to John Butters, senior earnings analyst at FactSet. But only 44 percent have beaten estimates for revenue.

Dow Chemical, which reported results, was one example. The company managed to increase profit even as revenue slipped because it cut costs and paid down debt. The stock rose nearly 6 percent to $33.97.

In other markets, trading resumed on the Chicago Board of Options Exchange close to 1 p.m. Eastern after being shut down all morning because of software problems. The CBOE’s VIX index, a measure of how volatile investors expect the market to be, was virtually unchanged at 13.62, close to its low point of the year, 11, reached on March 15.