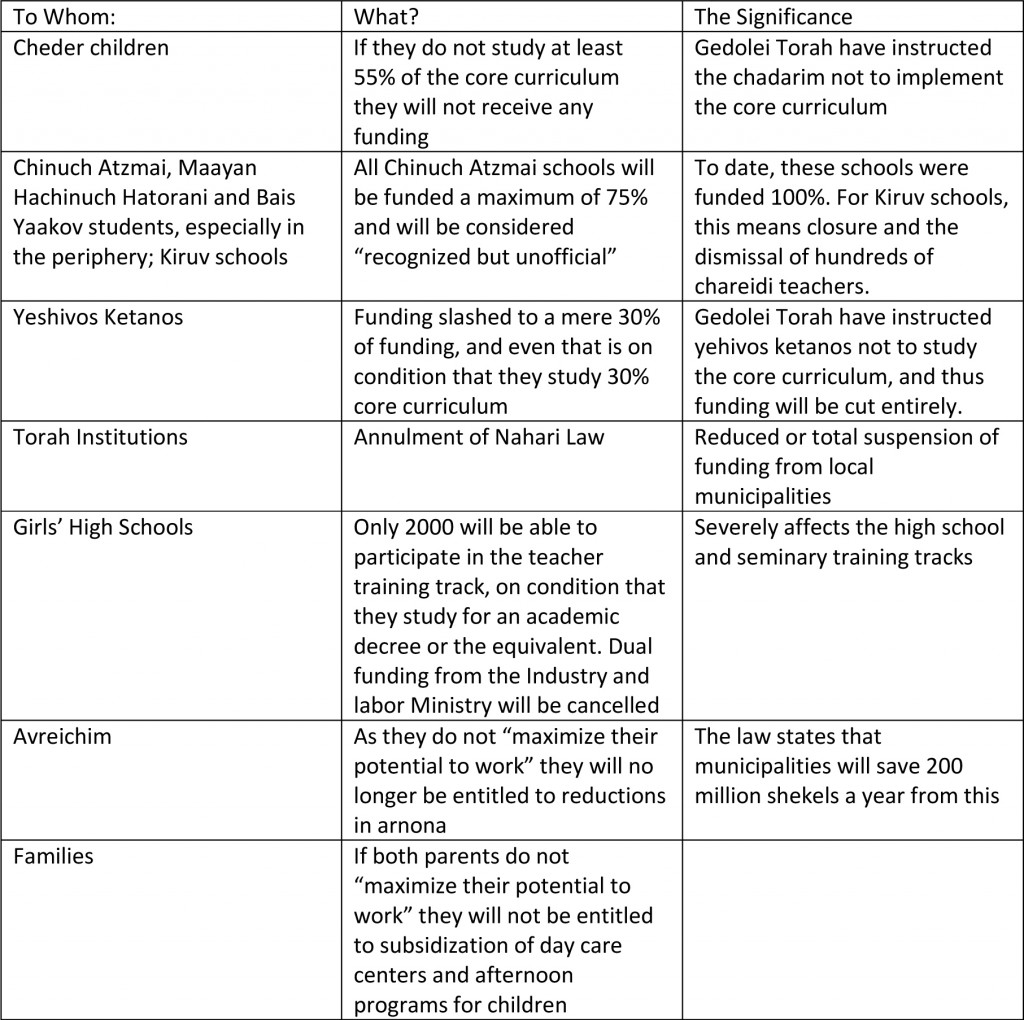 The Finance Ministry submitted its proposed Budget Arrangements Law for 2013-2014, which accompanies the annual budget, to the government on Wednesday.

The proposal, which covers a range of topics within the Israeli economy, is especially harsh on budget allocations to the chareidi population, particularly the educational institutions, from the early elementary school grades through the kollelim.

It should be noted that many of the planned budget cuts, such as child allowance cuts, are not included in the Budget Arrangements Law but are part of the actual budget.

Likewise, financial fallout from the government’s plans to draft chareidim, namely massive cuts to yeshivos and kollelim, are not part of this law either.

The law calls for many other changes and budget cuts in other aspects of the economy. Most of them consist of structural changes and reforms rather than outright cuts to which there is a lot of ideological opposition. But in no other part of the law are the cuts as draconian in a way that nearly eradicates all funding for beneficiaries of government funding as the clauses related to chareidi funding.

In an effort to force chareidi schools to teach the core curriculum program of secular studies, the law would completely suspend all funding for chadarim that refuse to teach these subjects, as Gedolei Yisrael have stipulated. However, the most shocking part of the law goes even further, stating that even those schools that implement 100 percent of the core curriculum will receive only 75 percent of the funding that a child in a national or national religious school receives.

Explanatory notes on the law specifically say that the independent Chinuch Atzmai and Maayan Hachinuch HaTorani networks should not be funded at the same rate as state schools in order to strengthen the general school system. The significance of this is that the government is discriminating between one child and another based solely on the fact that one learns in a chareidi school, even if the school follows the government’s core curriculum to the letter.

Should the law pass as is, it would mean that tuition rates for parents would soar. Kiruv institutions such as Shuvu and similar networks might be forced to close since they cannot ask their parent bodies for tuition; the parents will just send their children to the national system free of charge.

It should be noted that expenses for yeshivos ketanos considerably exceed the 100 percent government funding because they cater to children from morning to night, and government funding only covers school activities until three o’clock in the afternoon. Yeshivos charge tuition and solicit funds to make up the shortfall. But if they lose the basis of their budget, it will be a death blow for most of them — virtually tantamount to hanging a “Closed” sign on the front door.

Girls’ high schools (six-year programs) are not spared either.  The law calls for a suspension of funding for all schools that do not provide an academic degree for teachers or an equivalent degree.

Furthermore, the number of girls who will be permitted to register for a teacher training track will be capped at 2,000, compared to the current enrollment of 18,000.

The government explains that the demand for teachers in the chareidi school system can reach up to 2,500 teachers per annum; the way the current system works, thousands of girls are being trained as teachers, but there is almost no chance that they will find jobs in that field.

Ultimately this amounts to a deep cut in the budgets of high schools, which had offered dual training for teaching plus another profession. The dual track will be completely suspended, and each girl will have to choose which profession she wants to train for, with a limit of 2,000 slots a year for the teacher training program.

Education frameworks for all ages will suffer from the proposed annulment of the Nahari Law, named for Shas MK Meshulam Nahari, who introduced it. Under the law, all municipalities are required to pay for auxiliary services in Torani schools, as they do for all other institutions. Among these services are janitorial and secretarial services, electricity, administration and the like.

It is impossible to quantify exactly how much this funding is worth because it is spread over many municipalities, and in essence becomes part of their budget. But it will especially affect chareidi institutions in mixed cities, where their political strength in municipal elections is minimal.

If all the institutional cuts are not enough, the law contains many clauses that will directly affect the budgets of chareidi households. The law calls for the creation of a new criterion for every type of government funding or discount. In order to receive the relevant funding or discount, one will have to prove that he and his wife are maximizing their potential ability to work for a living. In essence, the government is forcing both parents to go out to work (or claim unemployment); otherwise, they will not be entitled to housing benefits and discounts at day-care centers and on arnona (property tax).

Learning in kollel translates into not working. Therefore, a kollel family will not be eligible for subsidies for full-day child care so that the mother can work, and at the same time there is no way they will be able to afford day care, arnona and housing expenses without the benefits.  The sum of these budget allocations is also impossible to quantify.

Chareidi MKs have noted that this clause is a de facto fine for learning. Criminals in prison who cannot work can receive all these benefits, even if they are terrorists who endanger national security. That is because the government understands that children should not pay for their fathers’ crimes. Apparently, the agenda to force kollel avreichim away from learning supersedes that understanding, they note.

If implemented, these cuts will no doubt decimate the budgets of yeshivos, girls’ schools and families. Even so, the amount the government will save will hardly  make a dent in its huge 42-billion-shekel budget shortfall. The entire budget for Torah institutions amounts to 1.5 billion shekels a year.

Many economists wonder if affecting the buying power of such a large swath of the population will not do more damage to the overall economy than the budget savings the cuts will provide.  Shmuel Slavin, a former director general of the Treasury Ministry, said on Thursday, “This sounds like much more about political gain on behalf of Finance Minister Yair Lapid than economic prudence for the Finance Ministry.”

Labor Party chairwoman Shelly Yachimovich called the entire Budget Arrangements Law a “garbage can of election slogans.” She noted that she has always been an opponent of this law because it bypasses the democratic process of debate on structural reforms. She noted that while she is not religious in any way and does not share much ideology with the chareidim, the anti-chareidi ranting in the law “has nothing to do with economics; it is all electioneering. The savings from cuts to yeshivos is minimal and is nothing but a distraction by the government to avoid a debate on the real budgetary issues.”

The proposal now goes to the government, which needs to approve it for a vote, after which it goes to the Knesset. If it passes a first reading, it is submitted to the Finance Committee for further deliberation, and then returns to the Knesset plenum for a second and third reading.

Each year, many changes are made to the Budget Arrangements Law as it goes from one stage to another. However, it is unclear which coalition parties will be fighting to change these clauses. Though Minister Naftali Bennett, chairman of Jewish Home, promised when the government was formed to “protect the Torah world,” he has been mum since all discussion of the budget began. The law craftily avoids cuts to the National Religious sector he represents.