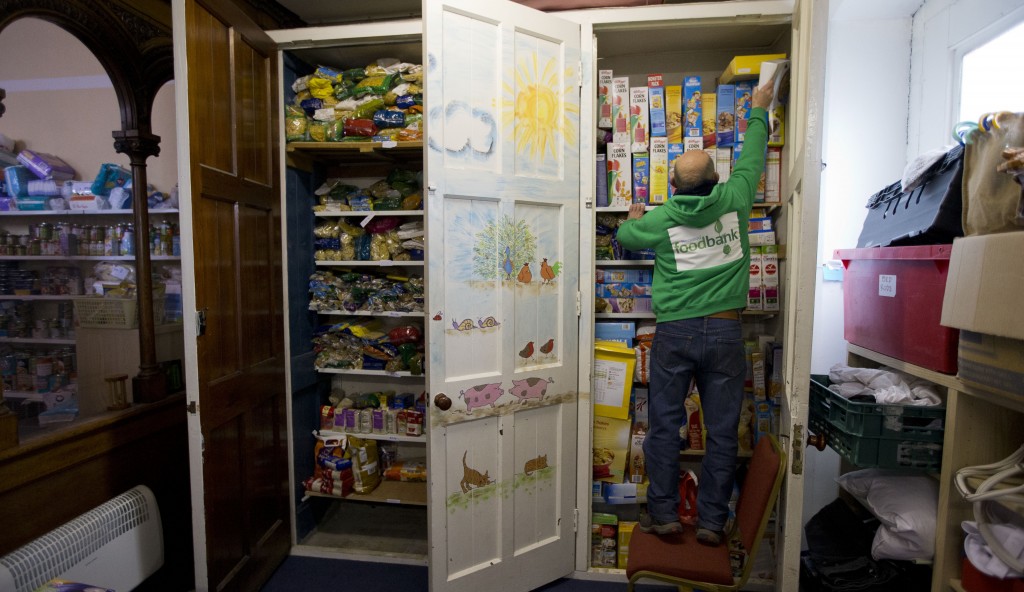 Recession may just be a word. But in Britain it may become a habit – and a dangerous one at that.

It’s possible that official figures on first-quarter economic growth, to be released Thursday, could show the country is back in recession, and tension is building.

Although economists on average expect growth of 0.1 percent for the quarter, they warn it would take the smallest statistical variation to put the figure in negative territory. That would place the country in recession, typically defined as two consecutive quarters of economic contraction.

Another recession – the third since the 2008 financial crisis – is already being referred to with foreboding in the media as a “Triple Dip.” Experts warn that its confirmation would create a wave of negative media attention that would scare consumers away from spending, feeding into a vicious cycle that has the economy flat-lining.

“It’s psychological – this is all psychological,” said Cary Cooper, a professor at Lancaster University Management School. “It’s about the message that those figures send to consumers and small businesses.”

The government desperately wants a strong number to justify its increasingly criticized policy of painful spending cuts. But recent indicators on Britain’s economy, the third-largest in the 27-country EU after Germany and France, have been disappointing.

Inflation is rising faster than wages, cutting into people’s standard of living. Unemployment is up at 7.9 percent. Two international ratings agencies have downgraded the country’s credit grade from the top level AAA, warning about the government’s fiscal policies.

The government, which has long played on its AAA rating as a sign of its economic might, has been pursuing a harsh program of spending cuts and tax increases to reduce the budget deficit, which, at 7.4 percent of annual economic output, is more than twice the EU’s 3-percent limit. Like many governments across Europe that have been scarred by the bond market turmoil that forced Greece and four other countries to need rescue loans, Britain is focusing on reducing debt quickly, even at the cost of short-term economic pain.

What some governments and economists are slowly realizing, however, is that they may have underestimated the damage such austerity would do.

There’s long been pressure domestically in Britain to ease off the budget cuts, but in the past few days, the International Monetary Fund also chimed in. The Fund, whose views carry weight as it is involved in all of Europe’s sovereign bailout programs, has pressured Treasury chief George Osborne to slow down the austerity measures in hopes of reviving the economy, whose output was worth 1.4 trillion pounds ($2.1 trillion) in 2012.

As the austerity debate rages on, none other than the national spiritual leader – the Archbishop of Canterbury, Justin Welby – has waded in and used a word no one wants to hear: depression.

Welby has unusual standing in the world of money because in a previous life he served as an oil industry executive, and he now sits on the parliamentary banking standards committee. He told an audience at the heart of government in Westminster on Monday that there was an issue of confidence and trust – and there is need to rebuild both.

“I would argue that what we are in at the moment is not a recession, but essentially some kind of depression, and it therefore takes something very, very major to get out of it, in the same way as it took something major for us to get into it,” he said.

The Bank of England has cut its interest rate to a record-low 0.5 percent and pumped money into the financial system in the hope that it will encourage banks to lend money more cheaply. But the results have been mixed and experts say there is only so much a central bank can do to create jobs.

On Wednesday, the Bank of England and the Treasury extended until January 2015 a program to boost lending and help the economy. The program offers funding at low interest rates to banks on condition that those rates are passed on to small businesses and households. However, its results so far have been mixed.

Even if the economy dodges recession, the daily reality for many Britons remains tough.

The Trussell Trust, a food bank network, said it fed more than 350,000 people in the year ending in March – more than double the 128,000 served in the previous 12-month period. Tim Boyce, a retired investment banker who runs a south London branch, said he’s seeing the people behind those numbers. Inside a frosty church that’s opened its doors to the desperate, he watches as they come for emergency handouts of rice, pasta and beans.

“Most people don’t realize the extent of poverty,” he said, as he sipped coffee to keep the edge off the chill. “It’s hiding in plain view.”

Take the cases of Kevin Bishenden, 50, and his wife, Nicola, 40. He’s an upholsterer who says that no one wants to hire someone his age. She says she just can’t find work. The only reason they aren’t homeless is that Britain’s welfare state manages to keep a roof over their heads.

But they’ve slowly been shedding all their possessions, together with memories of a past life. First a bike, then stuff from the kitchen. Even smaller items that only sell for a few pennies. And they’ve already sold their wedding rings.

He lamented a new council tax payment of 15 pounds ($22.80) that came into effect as part of government austerity plans. His exhaustion was plain as he tried to imagine paying for it.

“Where’s that supposed to come from?”