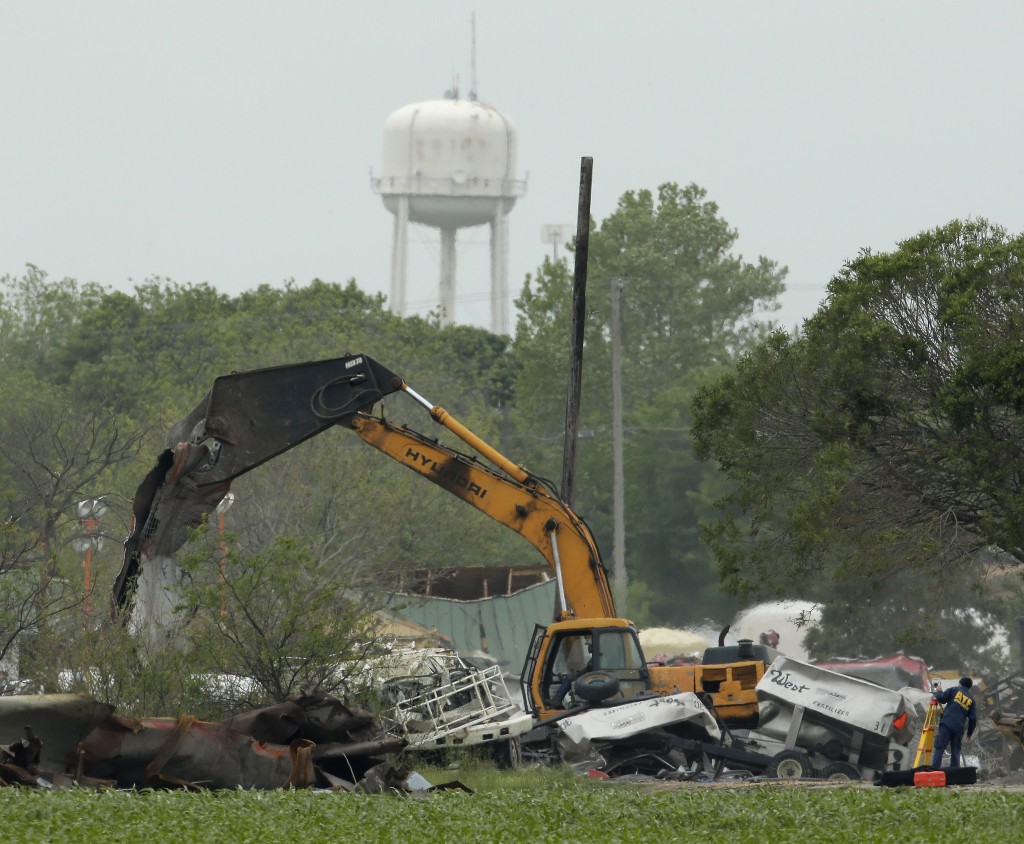 North American fertilizer production projects totaling $22 billion may be at risk of delay, amid increased scrutiny from regulators and communities, after last week’s explosion at a Texas plant killed 14 people.

CF Industries Holdings Inc., the largest U.S. maker of nitrogen fertilizer, and competitors including Agrium Inc., Mosaic Co. and Koch Industries Inc., are planning more than a dozen new plants. The projects are among $100 billion in North American manufacturing investments, ranging from plastics to steel, spurred by the availability of cheap natural gas, according to Dow Chemical Co.

“You wonder if there is going to be some kind of move against ammonium nitrate,” Mark Gulley, a New York-based analyst at BGC Financial LP, said by phone, referring to the form of nitrogen fertilizer that may have been involved in the Texas blast. “There could be some push-back.”

The April disaster occurred following a fire at a fertilizer plant owned by closely- held Adair Grain, Inc. The facility held 270 tons of ammonium nitrate as of Dec. 31, according to state records.

The highly explosive chemical is responsible for some of the most deadly industrial accidents and terrorist attacks. Timothy McVeigh used it in 1995 to destroy Oklahoma City’s Alfred P. Murrah Federal Building, and kill 168 people. The Irish Republican Army used it to attack London’s Canary Wharf in 1996.

State and federal investigators are trying to find the cause of the West blast, victims of which include 10 firefighters and emergency medical personnel. The death toll may be the highest for a U.S industrial catastrophe since April 2010, when 29 coal miners perished in Massey Energy Co.’s Upper Big Branch mine in West Virginia.

The disaster may lead to more attention being paid to ammonia production and storage safety procedures, P.J. Juvekar, an analyst at Citigroup in New York, said in an April 18 report.

Sen. John Cornyn, R-Texas, said, during a visit last week to West, that he’s confident the blast will lead to a review of the government’s chemical plant safety rules.

The West facility was more of a distributor than a fertilizer producer, Mark Connelly, a New York-based analyst at Credit Agricole Securities, said in a report.

“While it may be used by opponents to try to block a permit here and there, the proposed new nitrogen plants mean big money and big jobs in areas that mostly don’t have either,” Connelly said.

Workers and safety advocates have been pushing the U.S. to tighten federal oversight of chemical production and storage facilities for decades. While they pressed for such proposals after the September 2001 terrorist attacks, legislation they advocated never passed Congress. The EPA considered regulations before dropping the idea under President George W. Bush’s administration.

The nitrogen fertilizer industry is proposing about $20 billion of new plants and almost $2 billion of expansions in North America, Gulley said. While chemical-industry investments are concentrated along the coasts of Texas and Louisiana, fertilizer projects are planned across nine states and three Canadian provinces.

Most proposed plants are away from population centers, and any that aren’t may be pressured to relocate, Gulley said.

“Activists will ask a lot of questions, and that’s their right,” Gulley said. “The states are eager for capital investments, and these plants create jobs, generate taxes and produce products used on farms.”

Among the planned projects is CF’s proposed $1.7 billion expansion of its site in Port Neal, Iowa. An explosion of ammonium nitrate at the same Missouri River location in 1994, when it was under different ownership, killed 4 workers and injured 18.

In 1947, ammonium nitrate aboard the SS Grandcamp caught fire and exploded at the docks in Texas City, killing more than 570.

“When it comes to running our facilities, we use world- class operators,” Dan Swenson, a spokesman for Deerfield, Ill.-based CF, said by phone. “There are layers upon layers of safety interlock systems that can isolate, shut down or redirect individual systems, or shut the whole plant down.”

Gas accounts for 70 to 90 percent of the cost of making ammonia, a precursor to nitrogen fertilizer. Lower gas prices, relative to producers in Europe and elsewhere, make the U.S. among the lowest-cost fertilizer producers in the world, CF’s Swenson said.

That’s partly why CF is spending $3.8 billion to build new ammonia and nitrogen capacity by 2016, including the Port Neal expansion, he said.

Spokesmen for Agrium, Yara and Mosaic didn’t respond to requests for comment on whether the Texas blast alters prospects for industry expansion. Koch referred questions to The Fertilizer Institute, an industry group, which declined to comment.

CF, like all nitrogen fertilizer makers, also produces anhydrous ammonia, a gaseous form of nitrogen sprayed on fields, that is also a raw material used to make the other forms of nitrogen.

“We all live around something that has potential danger,” Monson said by phone. “We have assurances they are extremely capable of handling the facility.”