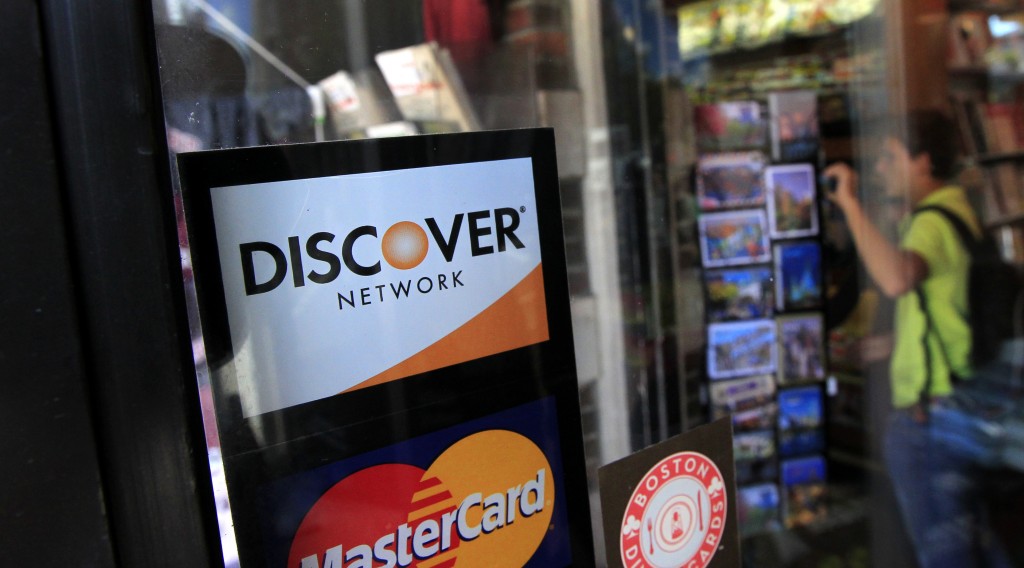 Chairman and Chief Executive Officer David Nelms is repurchasing shares and increasing dividends, as the bank, which gets most of its revenue from credit cards, expands its mortgage and student-loan businesses. The company also is extending the reach of its global payments network as it plans to begin processing transactions for customers of EBay Inc.’s PayPal unit at brick-and-mortar stores in the United States this year.

Discover “reported a solid quarter driven by a beat on both top-line and expenses,” Sanjay Sakhrani, a KBW Inc. analyst, wrote in a note to clients Tuesday. “Underlying trends, such as credit quality and receivables growth, also came in better than our expectations.”

The shares have advanced 15 percent this year, outpacing the 12 percent gain of the Standard & Poor’s 500 Financials Index of 81 U.S. companies.

Discover, one of the biggest U.S. student lenders, boosted private student loans by $431 million, or six percent, according to the statement. Personal loans increased by $578 million, or 21 percent, to $3.4 billion. Total revenue jumped 10 percent to $1.99 billion.

Credit-card loans at least 30 days delinquent reached a record low of 1.77 percent in the first quarter, the company said.

“We may be at the bottom, but the bottom may be flat, as opposed to turning back up anytime soon,” Nelms, 52, said in a phone interview. “From a credit perspective, the U.S. consumer is great, if you get outside of mortgages.”

Credit-card write-offs for Discovery were 2.36 percent, according to the statement, the second-lowest among the six biggest U.S. issuers, after New York-based American Express Co.’s two percent.

Discover released $154 million from a reserve to cover soured loans, which helped bolster profit. The accounting gain amounted to about 19 cents per share, Sakhrani wrote.

Total operating expenses grew 12 percent, mainly because of an increase in the number of employees, and higher compensation and marketing costs, according to a presentation on the firm’s website.

Retail sales in the United States, where Discover gets most of its revenue, dropped in March by the most in nine months, pointing to a slowdown in consumer spending as the quarter drew to a close. The data spurred economists to pare consumer-spending forecasts from what had been projected to be the best quarter in two years.

“I’m certainly hoping that it will pick back up a little bit, but so far I’ve seen no signs that it is,” Nelms said. “It would be good for consumers and businesses, and ultimately us, if consumer spending did grow.”

The deal with San Jose, Calif.-based EBay, announced in August, will let PayPal’s more than 50 million U.S. customers use their accounts at more than 7 million merchant locations that already accept Discover cards. The partnership gives PayPal, which seeks to transfer its online success to the physical world, access to a network that reaches about the same number of U.S. merchants as Visa Inc. and MasterCard Inc.