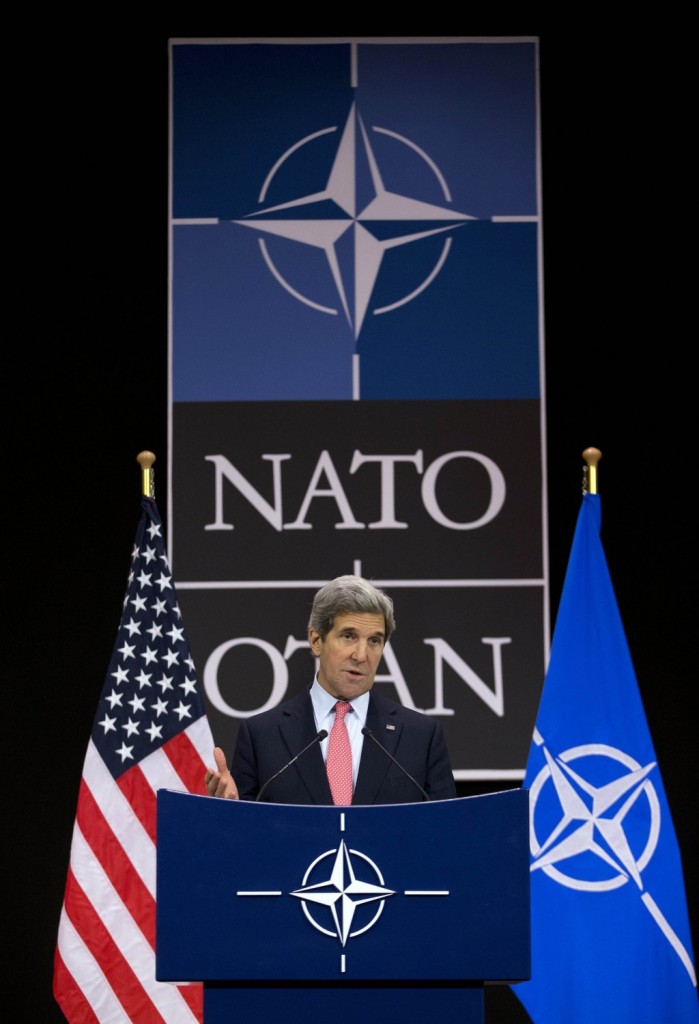 Kerry, speaking after talks with Lavrov and NATO colleagues in Brussels, also backed away from earlier comments suggesting he was calling for increased NATO contingency planning on Syria.

Kerry said he and Lavrov had discussed ways to revive a peace plan agreed in Geneva last June that called for a transitional government.

“We are both going to go back, we are going to explore those possibilities, and we are going to talk again about if any of those other avenues could conceivably be pursued,” Kerry said.

But, he stressed: “I would say to you that it’s a very difficult road … No one should think there is an easy way to move forward on this.”

Moscow has for months been calling for implementation of the Geneva Declaration agreed by world powers including Russia and the United States, but disagrees with Washington’s assertion that it requires Assad to step down.

Lavrov said last week that pressing for Assad’s removal would increase the threats posed by terrorist Islamist groups such as the rebel al-Nusra Front, which formally pledged allegiance this month to al-Qaida leader Ayman al-Zawahri.

Lavrov told a news conference on Tuesday the Geneva agreement could “not be interpreted in various ways; it has no ambiguity.”

“Everyday more people are killed. However I see a growing understanding of the urgency to go from calls for election to real actions. That is why I hope we will see concrete actions on everybody’s side,” he said.

Kerry said in a statement to a meeting of NATO ministers earlier that the alliance needed “to consider its role in the Syrian crisis, including how practically prepared it was to respond to a potential chemical weapons threat.”

“We should also carefully and collectively consider how NATO is prepared to respond to protect its members from a Syrian threat, including any potential chemical weapons threat,” he said, according to a copy of his prepared remarks provided by the State Department

At the news conference, Kerry, who is attending his first NATO ministerial as secretary of state, said he had not called for more planning.

“What I did suggest to everybody was that we therefore need to all be thinking about how we can get to the negotiating table to avoid an implosion of Syria, which would be the worst consequence.”

NATO Secretary-General Anders Fogh Rasmussen told a news conference the alliance was “extremely concerned about the use of ballistic missiles in Syria and the possible use of chemical weapons.”

NATO, a U.S.-led military alliance of 28 countries, has said repeatedly it has no intention of intervening militarily in the Syrian civil war, although it has sent Patriot missile batteries to Turkey to help defend the NATO member against possible attack from Syria.