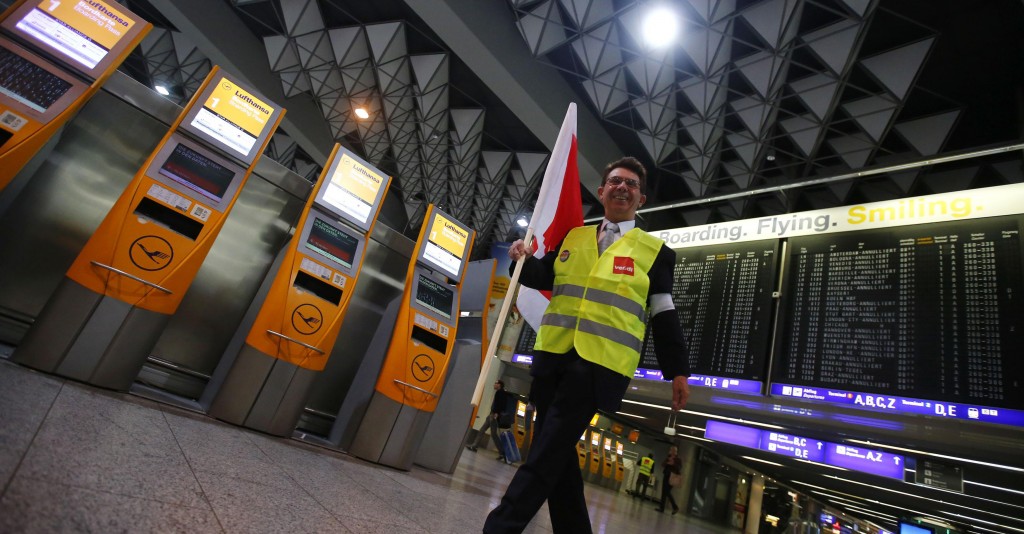 The airline grounded a total of 1,755 flights Monday, with only about 20 of 1,650 planned European flights and 12 of 70 planned long-haul services taking off, the carrier said. Lufthansa cannot yet quantify the financial fallout because the airline must first establish how many passengers will rebook flights, cancel them and have to be looked after when stranded.

The protest comes as Lufthansa tries to push through its most ambitious efficiency program ever, to generate the money necessary to rejuvenate its aging fleet. The strike is the biggest disruption of air travel in Germany since April 2010, when the eruption of Iceland’s Eyjafjallajokull volcano grounded 100,000 flights in six days throughout Europe.

“It demonstrates the power of the unions,” said Jochen Rothenbacher, an analyst at Equinet in Frankfurt. “Motivation to strike seems to be high, allowing the union to flex their muscles.” Rothenbacher predicts the strike may cause about 20 million euros ($26.1 million) in operating losses for the company and may complicate efforts to push through savings.

The airline is seeking to lower costs and increase sales to lift operating profit to a record 2.3 billion euros ($3 billion) by 2015, a plan that includes eliminating 3,500 jobs.

The Ver.di union, which represents about 33,000 Lufthansa employees including catering, freight and maintenance personnel, is demanding a 5.2 percent wage increase. The union is also pressing for an agreement to exclude firings.

In September last year, a strike by cabin crew caused the airline to cancel more than 50 percent of service on its worst day, or more than 1,000 flights. On Feb. 22, 2010, a strike by pilots wiped out two-thirds of all connections.

Flights operating as scheduled Monday include six long-haul flights from Frankfurt to destinations including Madras in India, three services from Munich including to Charlotte and Chicago, and three intercontinental flights from Dusseldorf.

Lufthansa-partner SAS canceled 56 flights Monday as it expects travel in and out of Germany to be disrupted by the strike, Check-in.dk reported. The German carrier’s Austrian Airlines unit plans to operate its flight as scheduled, the airline said on its website yesterday. Its Swiss unit lists 13 canceled flights on its website.