EXCLUSIVE: Palace Said to Be of Malchei Yehudah Found 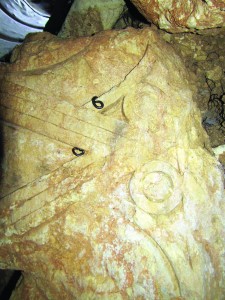 News that one of the lost palaces from the period of the first Beis Hamikdash and thought to be associated with Malchei Yehudah has been found has created a storm among archeologists and historians.

The site is located in Harei Yehudah, south of Yerushalayim, in a Palestinian area, about about 100 meters (328 feet) from Israel’s security fence.

While the Israeli Antiquities Authority had apparently known of the site as early as a year and half ago, because of the fact that it is within a Palestinian area they chose not to make the finding public. Recently, during a trip by members of the Kfar Etzion Field School, a guide came across a pillar lying within a pool of water with distinctive artistic engravings, identical to other palaces associated with Malchei Yehudah. They immediately contacted the Antiquities Authority, who sought to cool off their enthusiasm and hinted to the principle of the field school that it would be worthwhile to keep the finding a secret.

This finding is considered to be particularly important as the engraving was found in the original location and is part of a huge pillar weighing several tons.

The school’s principal, Yaron Rosenthal,  chose to notify the media and urged the Authority to properly excavate the site before it is plundered by local residents.

The decision by the school to go public has drawn scathing criticism by some, who have suggested that though their intentions were good, the media attention may well produce the precise opposite effect — notify the local residents of the site and cause it to be ransacked and plundered before it can be properly excavated.

A spokesman for the Antiquities Authority confirmed that the finding was important but said that due to the sensitivity of the location the approach to the issue must be “serious and responsible.”

This article appeared in print on page 1 of the April 22nd, 2013 edition of Hamodia.