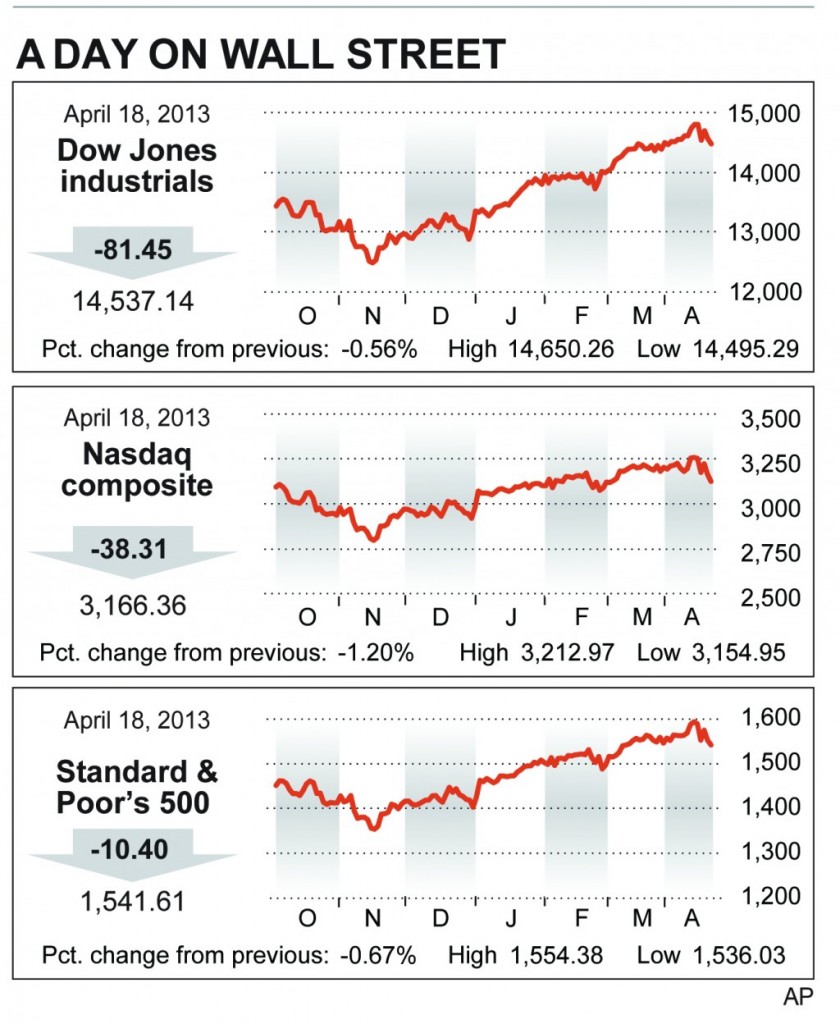 Disappointing earnings from a range of companies pushed the stock market lower on Thursday, giving major indexes their third loss this week.

The stock prices of Morgan Stanley, UnitedHealth Group and others sank after they turned in weaker quarterly results. Prices of commodities held steady following a wild couple of days. Government bond yields remained near their lowest point of the year as investors sought safety.

Compared with the steep drops earlier this week, the losses on Thursday looked tame. The S&P 500 lost 2 percent on Monday, its worst day of the year, when a slowdown in China’s economic growth set off a rout in prices for gold, oil and other commodities and pummeled the stocks of companies that make them. After reaching a record high a week ago, the index has now slumped 3 percent.

One reason behind the market’s sudden turn might simply be that investors wanted to take some of their winnings off the table, said Joseph Tanious, global market strategist at J.P. Morgan Funds. At the start of April, the S&P 500 was already up 10 percent for 2013, more than investors can expect to get in most years.

“For a while there, it seemed like all the headlines were ‘stock market hits all-time high,’” Tanious said. “When they see things like that, investors get nervous and look for reasons to sell.”

Profit slipped at Morgan Stanley as the bank made less money from trading bonds and commodities, a common theme for many investment banks this earnings season. Morgan Stanley lost 5 percent to $20.31.

UnitedHealth’s profit fell short of analysts’ estimates, and the country’s largest health insurer said it expects federal budget cuts to pressure its earnings this year. Its stock lost 4 percent to $59.69.

EBay fell 6 percent to $52.82 after the online auction firm cut its profit forecast for this quarter.

The market didn’t get any help from economic news Thursday. Investors pointed to reports that more people applied for unemployment benefits last week and manufacturing slowed in the mid-Atlantic region.

Analysts have set a low bar for first-quarter earnings. They predict that companies in the S&P 500 will report that earnings climbed just 1.5 percent in the first quarter compared with the same period a year ago, a slowdown from the 7.7 percent growth in the fourth quarter, according to S&P Capital IQ.

Of the 61 companies that turned in results through Wednesday, 39 of them have exceeded Wall Street forecasts.

In the market for U.S. government bonds, Treasury prices rose and their yields fell as traders moved money into low-risk assets. The yield on the 10-year Treasury note slipped back to 1.68 percent. The yield was 1.70 percent late Wednesday.

Crude had lost $10 a barrel over the past two weeks as the outlook for the global economy weakened and oil supplies remained high.

On Monday, Gold fell 9 percent, its biggest plunge in 30 years, as inflation in the U.S. remained weak.