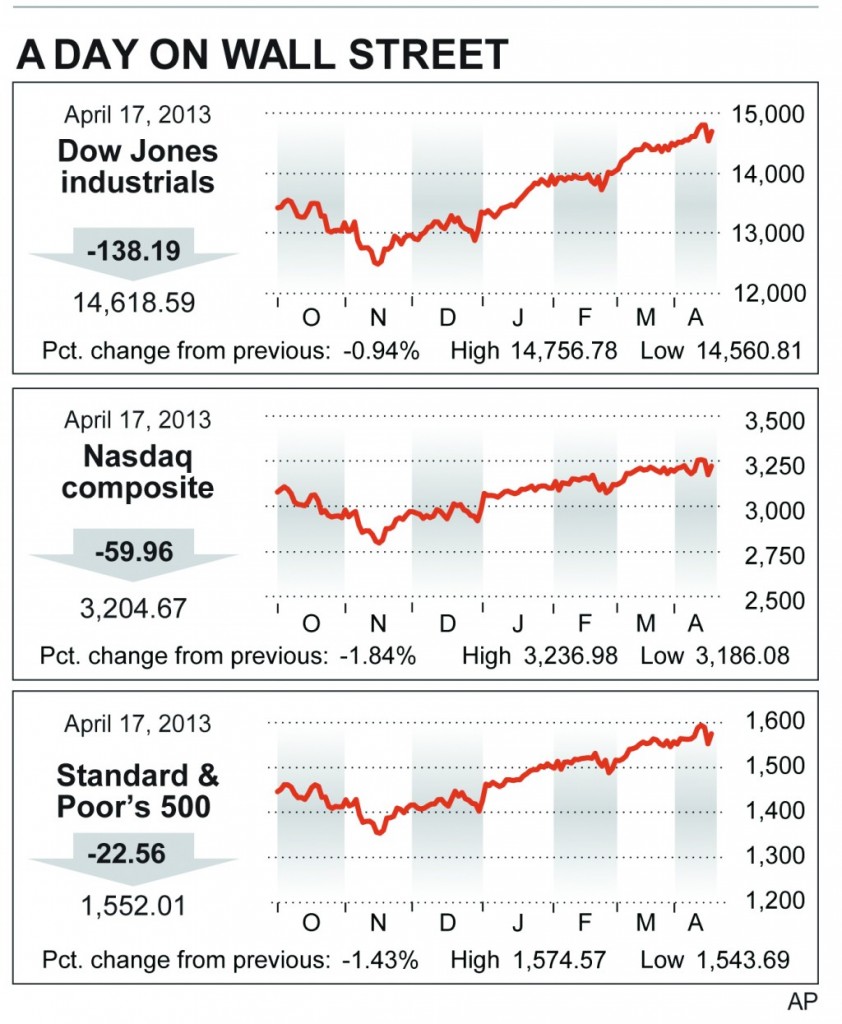 Stocks fell sharply Wednesday for the second time this week as investors continued to worry about how much the global economy is slowing.

Commodities such as oil and copper fared even worse than stocks. Government bonds were a big winner as money flowed in from investors seeking safety. That drove prices higher, and the yield on the 10-year Treasury note fell to its low for the year at one point.

Technology, energy and bank stocks led the market lower. Apple dropped as traders worried about iPhone sales, Bank of America slid after its earnings failed to meet up to Wall Street’s forecasts and energy stocks fell as crude oil continued a weeklong drop.

Small-company and technology stocks did worse than the overall market.

As stock prices sank, the yield on the 10-year Treasury note fell to 1.70 percent from 1.73 percent. It went as low as 1.68 percent, matching its lowest level of the year.

The stock market had its worst day in five months on Monday after China reported economic growth that was slower than economists had expected. Metals, energy and other commodities have been hit hard this week and that has dragged down the stocks of miners and drillers and companies that provide services to them. Gold fell the most in 30 years on Monday.

Despite the big drops this week, the Dow is still 11.6 percent higher this year, the S&P 500 8.8 percent. And while falling energy prices may hurt energy stocks now, in the long run they are good for most companies and will put more money into the pockets of consumers and drive spending.

Stocks surged during the first three months of the year on optimism that a recovery in the housing market would boost the economy. But the stock market has struggled this month. Reports of weak hiring and retail sales suggested the economy may be cooling off.

“You’ve had numerous economic data points that have been, not really disastrous, but, not really as robust as people might like,” said Cam Albright, director of asset allocation at Wilmington Trust Investment Advisors. “When you have a market as extended as this, you almost need perfect information to make it continue to go up.”

Reports this week have added to a picture of slowing global growth.

New car sales in Europe fell 10 percent in the first quarter, the European automakers association said Wednesday, as high unemployment saps demand for big purchases. Britain said Wednesday that unemployment rose to 7.9 percent during the three months ending in February, an increase of 0.2 percent from the previous three months.

On Tuesday, the International Monetary Fund lowered its outlook for global growth this year to 3.3 percent from 3.5 percent, saying government spending cuts will slow the U.S. and European economies. And on Monday China said its economic growth slowed in the first three months of the year to 7.7 percent, below the 8 percent level anticipated by markets.

Bank of America fell 4.7 percent to $11.70, leading a broad decline in financial stocks, after reporting a first quarter profit of $2.3 billion that fell short of analysts’ expectations.

Corporate earnings for the first quarter suggest that growth has been slow and steady, rather than robust as investors had hoped, said Kevin Mahn, president of Hennion and Walsh Asset Management. Consumers and businesses are still reluctant to ratchet up spending.

Among other stocks making big moves, Textron, a maker of small aircraft, plunged $3.94, or 14 percent, to $25.41 after the company cut its outlook for business jet deliveries. Fairway climbed 34 percent to $17.35 on its stock market debut, even after the grocery store chain priced its initial public offering above expectations.