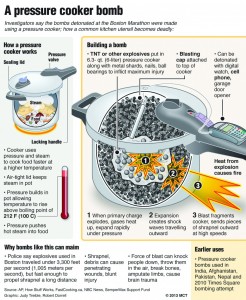 Strains of defiance, tenderness and wariness are interwoven as Americans are forced to do some post-9/11 rebalancing in the aftermath of the Boston bombings, figuring out how to move forward with life while remaining vigilant against the threat of terrorism.

The discovery of tainted letters sent to the Capitol and the White House only added a new source of jitters to the week’s events, evoking eerie parallels to the anthrax attacks that followed the life-altering events of Sept. 11, 2001.

For Simone Rinaldi, a nurse practitioner from Cape Cod, Mass. playing tourist in Washington this week with her family, the twin bombings at the marathon quickly revived thoughts of the collapse of the Twin Towers in New York as she wondered anew if there would be other attacks and whether loved ones in Boston were safe.

“I’ve definitely been more cautious as we walk around,” said Rinaldi.

Cautious, yes. But not cowed.

“The world is a really scary place, yet we have a life to live,” she said from a park across Pennsylvania Avenue from the White House. “The challenge is to take precautions, but again to not let our lives get small and live in fear.”

Jennifer Miller, a hospitality industry manager smoking a cigarette on a bench in Montana, said the marathon bombing made her think this: “It’s at home in America. It happened here.” But also this: “I refuse to live in fear of going anywhere or doing anything.”

Such perspective is precisely what terrorists try to destroy, by provoking reactions far out of proportion to actual danger.

Horrific as the bombing was — three people died in Boston, with more than 170 injured — five people die in car, truck or motorcycle accidents every hour in the U.S. Terrorism pushes our fear buttons, says security expert Bruce Schneier, and we have an outsized response.

“Psychologically, we are primed to overreact,” he says.

And that can cause people to surrender civil liberties without full deliberation in pursuit of safety and stronger law enforcement, as happened after 9/11, Schneier warns: “The fear is that this is an excuse to put us into a police state.”

Around the country, people wondered whether the bombing would — and should — affect security restrictions.

Security may increase for a time, but “the sad thing is it always goes back to normal,” said Lynn Chamberlain, a training coordinator at Johns Hopkins Medicine in Baltimore.

“Now we’re going to have to raise up not only our national security but our local security,” said Zeke Reardon, a Denver electrician.

Terrorism peaked as a public concern just one month after the 9/11 attacks. In October 2001, Gallup found that 46 percent of Americans called terrorism the most important problem facing the country, up from less than 1 percent in the days before the attack.

It has not reached that level of importance since, and in surveys this year, it once again stood at less than 1 percent.

But while it may not be Issue No. 1, security nonetheless remains a priority for most Americans.

This article appeared in print on page 4 of the April 18th, 2013 edition of Hamodia.

Donald Trump ‘Took the Fifth.’
What Does It Actually Mean?