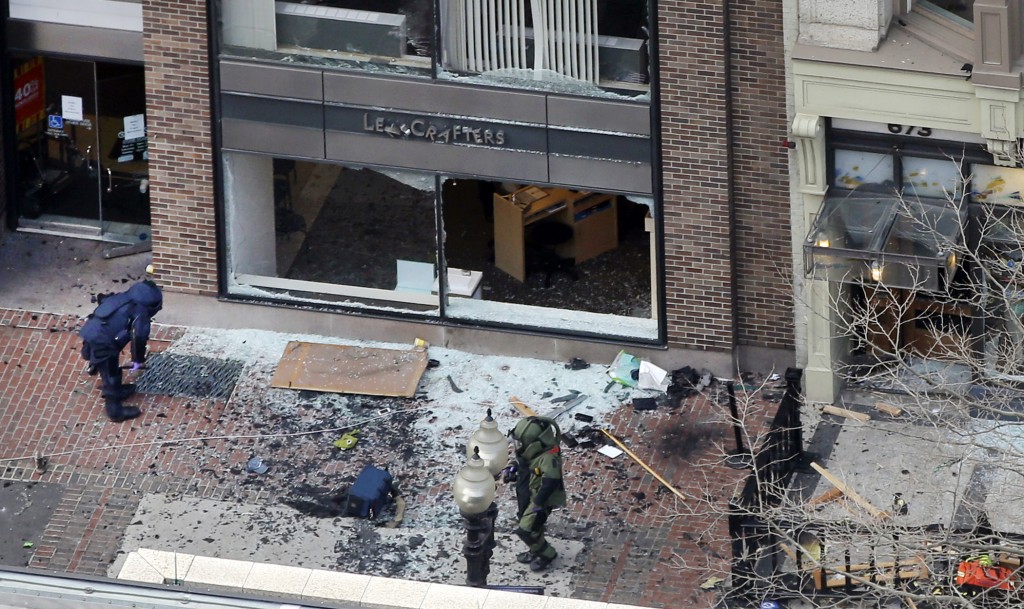 Two bombs exploded in the packed streets near the finish line of the Boston Marathon on Monday, killing three people and injuring more than 130 in a terrifying scene of shattered glass, billowing smoke, bloodstained pavement and severed limbs, authorities and eyewitnesses said.

One of those killed was eight years old, a law enforcement official told NBC News.

Rabbi Yosef Yitzhok Zaklos, the shaliach of Chabad of downtown Boston, had gone to the area to put tefillin on Jewish spectators of the marathon.

“I was standing about a half block away from finish line, asking people if they were Jewish and if they would like to don tefillin, when suddenly there was a huge explosion at finish line,” Zaklos told Hamodia on Monday.

“People were totally lost and shell-shocked. They started to run in the opposite direction of the blast and then twenty seconds later a second explosion took place at the other end of the block. I actually saw the fire and the smoke.”

After the second explosion pandemonium gripped the area.

“People started jumping over gates and rushing into some of the numerous restaurants and bars that line this street,” Zaklos said.

A senior U.S. intelligence official said two other explosive devices were found near the end of the 26.2-mile course.

CBS reported that an individual is in custody. He is reportedly of Saudi nationality, and denies involvement in the attack.

At the White House, President Obama vowed that those responsible will “feel the full weight of justice.”

There was no word on the motive or who may have launched the attack. Authorities in Washington said there was no immediate claim of responsibility.

The twin blasts at the race took place about 100 yards apart, tearing limbs off numerous people, knocking spectators and at least one runner off their feet, shattering windows and sending smoke rising over the street.

“Everyone thinks terrorism especially when you have back to back explosions,” Zalkos said. “Post 9/11 that is the knee-jerk reaction.”

Some 23,000 runners took part in the race, one of the world’s oldest and most prestigious marathons. When the explosions took place, more than 17,000 of the runners had finished the race, but thousands of others were farther back along the course.

The Boston Police Department said three people were killed. Hospitals reported at least 134 injured, at least 15 of them critically.

Boston Police Commissioner Edward Davis asked people to stay indoors or go back to their hotel rooms and avoid crowds, as bomb squads methodically checked parcels and bags left along the race route. He said investigators didn’t know whether the bombs were planted in mailboxes or trash cans.

He said authorities had received “no specific intelligence that anything was going to happen” at the race.

The Federal Aviation Administration barred low-flying aircraft from within 3.5 miles of the site.

Obama was briefed on the explosions by Homeland Security adviser Lisa Monaco. Obama also told Mayor Tom Menino and Gov. Deval Patrick that his administration would provide whatever support was needed, the White House said.

“We still don’t know who did this or why,” Obama said, adding, “Make no mistake: We will get to the bottom of this.”