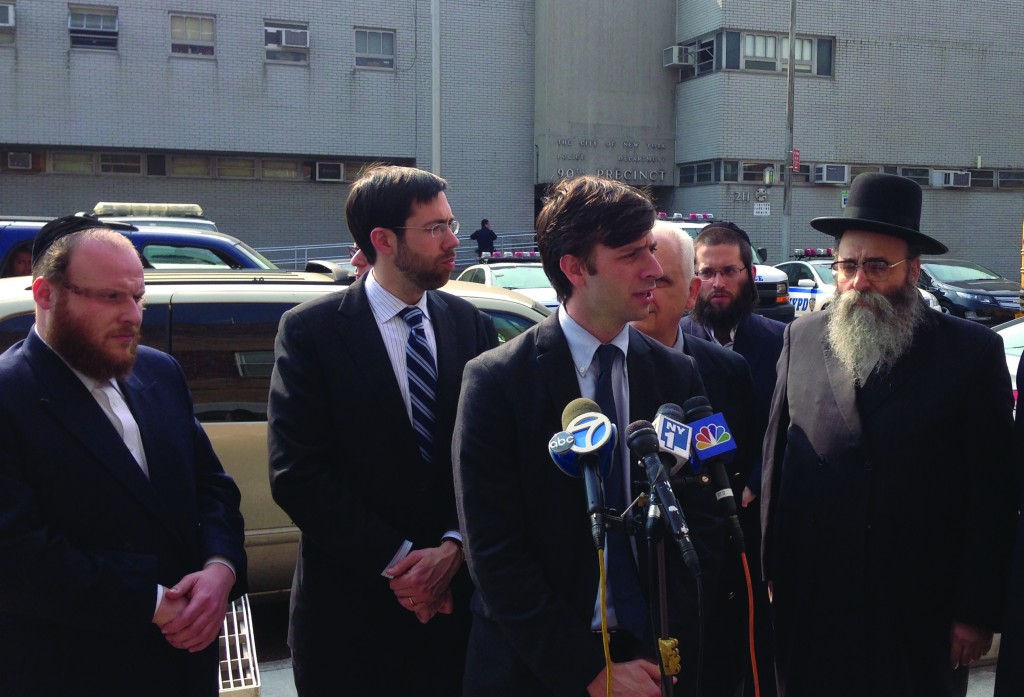 A man with more than 50 arrests under his belt was arrested by police Wednesday morning in connection with the dozen scorched mezuzos found in Williamsburg earlier in the week.

Rubin Ublies, a 35-year-old man who flitted from home to home, was taken in for questioning, hours after the New York Police Department released a sketch based on a video recording of him lighting a fire outside his latest target. He was taken into custody shortly afterward. No charges have yet been filed.

Ublies, a Hispanic living at the time with his grandmother in Williamsburg, not far from his victims, was said to be cooperating with police in the investigation. Shomrim members who patrol the neighborhood said they had countless interactions with Ublies going back to 1995, mostly for busting tires and burglaries.

“We had a history with him going back years,” Yanky Itzkowitz, coordinator of the Williamsburg Shomrim, told Hamodia on Wednesday.

The incident began on Monday, when eleven mezuzos were found burnt in a 21-story building, part of the “Williamsburg Projects,” on Taylor Street. As it was a religious article, police said they were looking at it as a possible hate crime.

But police had no leads to follow, other than wait for the arsonist to strike again. They had reason to believe that he would, based on the pattern of the burnt scrolls. The firebug reportedly went up to the 13th floor of the building, and made his way down, lighting at least one on each level.

They were right. On Tuesday afternoon, an hour after a press conference featured top city officials decrying the spate of attacks, a single mezuzah was set ablaze. This time, the perpetrator chose a nearby apartment building on Clymer Street, also on the 13th floor.

But police found a hidden camera that caught him in the act. They quickly released Ublies’s image, leading to his arrest at a friend’s home in Bedford Stuyvesant.

Police are questioning Ublies, who reportedly was arrested 52 times on assault and robbery charges over the past few years, at the 81st precinct headquarters.

A cousin of Ublies told the Daily News that while he may have a prolific criminal history, he would never commit a hate crime.

“I know he didn’t do it,” said the relative, who did not give her name. “You can look at his record … He’s never done anything hateful.”

“He doesn’t have anything against Jewish people. He’s nice to them. They’re nice to him,” Betra Velasquez, Ublies’s 79-year-old grandmother, told DNAinfo.com. “They only got his picture. They don’t have film of him doing it. They don’t have no proof.”

Yanky Itzkowitz of the Shomrim agreed.

“Lately we didn’t hear from him,” he said. “But [before that] he would be breaking cars, nothing anti-Semitic.”