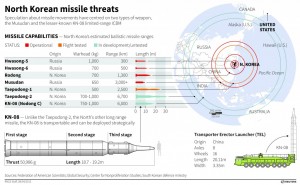 It’s easy to write off North Korea’s threats to strike the United States with a nuclear-tipped missile as bluster: it has never demonstrated the capability to deploy a missile that could reach the Pacific island of Guam, let alone the mainland U.S.

But what about Japan?

Though it remains a highly unlikely scenario, Japanese officials have long feared that if North Korea ever decides to play its nuclear card it has not only the means but several potential motives for launching an attack on Tokyo or major U.S. military installations on Japan’s main island. And while a conventional missile attack is far more likely, Tokyo is taking North Korea’s nuclear rhetoric seriously.

On Monday, amid reports North Korea is preparing a missile launch or another nuclear test, Japanese officials said they have stepped up measures to ensure the nation’s safety. Japanese media reported over the weekend that the defense minister has put destroyers with missile interception systems on alert to shoot down any missile or missile debris that appears to be headed for Japanese territory.

“We are doing all we can to protect the safety of our nation,” said chief Cabinet spokesman Yoshihide Suga, though he and Ministry of Defense officials refused to confirm the reports about the naval alert, saying they do not want to “show their cards” to North Korea.

“We once again warn Japan against blindly toeing the U.S. policy,” said an editorial Monday in the Rodong Sinmun, the official newspaper of its ruling party. “It will have to pay a dear price for its imprudent behavior.”

“The threat level has jumped” following the nuclear test, said Narushige Michishita, a former Ministry of Defense official and director of the Security and International Studies Program at Tokyo’s National Graduate Institute for Policy Studies.

Unlike North Korea’s still-under-construction intercontinental ballistic missile, or ICBM, program, its arsenal of about 300 deployed Rodong missiles has been flight tested and is thought to have a range of about 1,300 kilometers (800 miles).

That is good enough to reach Tokyo and key U.S. military bases — including Yokota Air Base, which is the headquarters of the U.S. 5th Air Force; Yokosuka Naval Base, where the USS George Washington aircraft carrier and its battle group are home-based; and Misawa Air Base, a key launching point for U.S. F-16 fighters.

This article appeared in print on page 2 of the April 9th, 2013 edition of Hamodia.