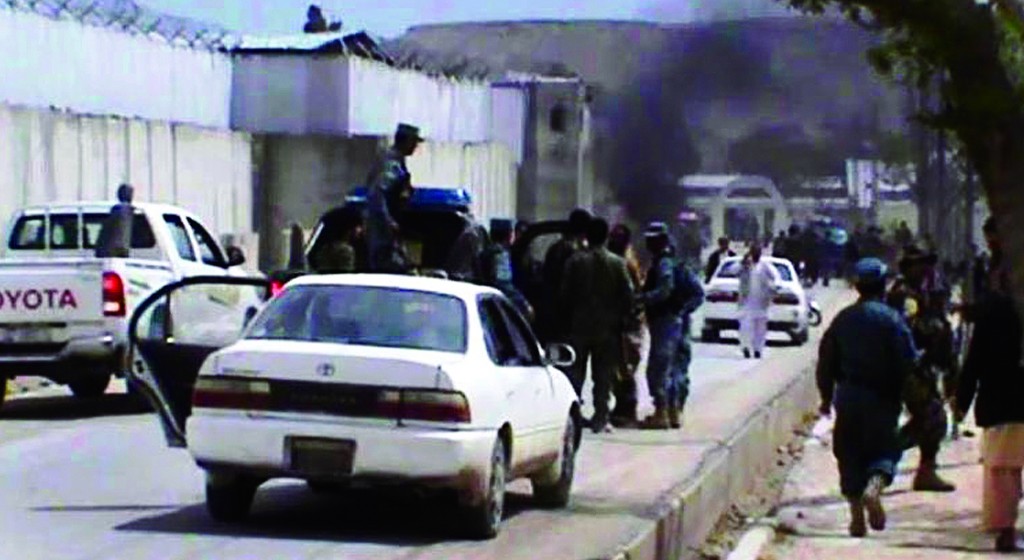 A car-bomb blast killed five Americans, including three U.S. soldiers and a young diplomat, on Saturday, while an American civilian died in a separate attack in the east.

The diplomat and other Americans were in a convoy of vehicles in Zabul province when the blast occurred, Secretary of State John Kerry said in a statement.

The soldiers and the diplomat died in the blast along with a civilian employee of the Defense Department and Afghan civilians, Kerry said. His statement gave no overall death toll.

The Washington Post identified the diplomat as Anne Smedinghoff, 25, citing her parents. Smedinghoff was Kerry’s embassy guide and aide when he visited Afghanistan last month, the paper said.

Smedinghoff was an up-and-coming employee of the State Department who garnered praise from the highest ranks. She was to finish her Afghanistan assignment as a press officer in July. Secretary of State Kerry said Sunday at a news conference in Turkey that Smedinghoff was “smart” and “capable.” Smedinghoff had assisted Kerry during a visit to Afghanistan two weeks ago.

He also described Smedinghoff as “a selfless, idealistic woman who woke up yesterday morning and set out to bring textbooks to school children, to bring them knowledge.”

“Our American officials and their Afghan colleagues were on their way to donate books to students in a school in Qalat, the province’s capital, when they were struck by this despicable attack,” Kerry said.

Her father said they knew the assignments were dangerous, though she spent most of her time at the U.S. Embassy compound. Trips outside were in heavily armored convoys — as was Saturday’s trip that killed five Americans, including Smedinghoff. The U.S. Department of Defense did not release the names of the others who died: three soldiers and one employee.

Provincial governor Mohammad Ashraf Nasery was in the convoy, but was unharmed, local and NATO officials said.

The convoy was near a hospital and a NATO base at the time of the explosion. Five Afghans, including a student and two reporters, were wounded, a local official said.

The attack came as the top U.S. general, Martin Dempsey, chairman of the Joint Chiefs of Staff, arrived in the country for a short visit to assess how much training Afghan troops need before U.S. troops pull out as planned by the end of 2014.

In an attack in Afghanistan’s east, an American civilian working with the U.S. government was killed during an insurgent attack, the NATO-led International Security Assistance Force said in a statement.

Zabul shares borders with Pakistan to the southeast and Kandahar province, the birthplace of the Taliban, to the south.

The Taliban claimed responsibility for the Zabul attack in a text message from spokesman Qari Yousuf Ahmadi. He said a car bomb killed seven foreigners and wounded five others, although he later revised the toll to 13 foreigners killed and nine wounded.

The killings followed a bloody Taliban assault in the country’s west on Wednesday that killed 44 people in a courtroom in Farah province. The United Nations says civilians are being increasingly targeted.