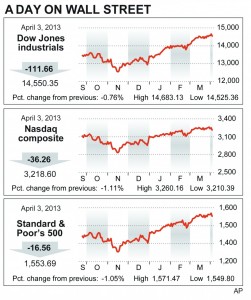 The stock market started 2013 with a rally as investors became more optimistic about the U.S. economy, especially housing and jobs. The reports Wednesday disappointed the market and came two days after news that U.S. manufacturing growth slowed unexpectedly last month.

The losses were widespread. All 10 industry groups in the S&P 500 index fell. Banks and energy stocks had the worst losses, 1.7 percent and 1.6 percent. Utilities, which investors hold when they want to play it safe, fell the least, 0.3 percent.

“The market is overdue for a correction,” said Joe Saluzzi at Themis Trading. “I don’t think that the economy supports this type of a rally.”

Signs of investor skittishness appeared across a number of different markets.

Commodities slumped. Crude oil dropped $2.74, or 2.8 percent, to close at $94.45 a barrel and industrial metals like copper fell.

The yield on the 10-year Treasury note fell to 1.81 percent from 1.86 percent, the lowest level for the benchmark rate since January. The decline means investors are moving money into low-risk U.S. government debt.

The Russell 2000 index, which tracks small company stocks, fell for a third straight day, dropping 1.7 percent. It’s now down 3.5 percent so far this week, far worse than the declines in the Dow, 0.2 percent, and the S&P, 1 percent. That’s another signal that investors may be becoming more bearish about the U.S. economy.

Small company stocks, which did better than the Dow and the S&P 500 in the first three months of the year, are more sensitive to the outlook for the U.S. economy than the larger companies in the Dow and S&P. That’s because they rely far more on domestic sales than global giants like IBM and Caterpillar, which sells heavy machinery and construction equipment around the globe.

The Dow Jones Transportation Average, an index of 20 stocks including airlines like Delta and freight companies FedEx and UPS, fell more than 1 percent for a third straight day. The index, which is regarded as a leading indicator for broader market indexes as well as the economy, has fallen 3.9 percent this week, after surging 17.9 percent in the first quarter.

U.S. service companies kept growing at a solid pace in March, but the expansion was less than economists were expecting. The Institute for Supply Management’s index of service companies fell to 54.4 from 56 a month earlier. The report was the weakest in seven months.

Separately, payrolls processor ADP reported that U.S. employers added 158,000 jobs last month, down from February’s gain of 237,000. The ADP report is often seen as a preview for the government’s broader survey on employment, which is due out Friday.

The slowdown in hiring was due in part to construction firms holding back on adding new employees. That sent the stocks of homebuilders lower. PulteGroup fell 85 cent, or 4.3 percent, to $19.01 and D.R. Horton dropped 57 cents to $22.84.

Even though stocks started the second quarter lower, markets typically add to their gains after ending the first quarter up, said Sam Stovall, an equity strategist at S&P Capital IQ. Using data going back over more than 60 years, Stovall says that the S&P 500 has gained an average of 9 percent from April to December after rising in the first quarter.

This article appeared in print on page D24 of the April 4th, 2013 edition of Hamodia.