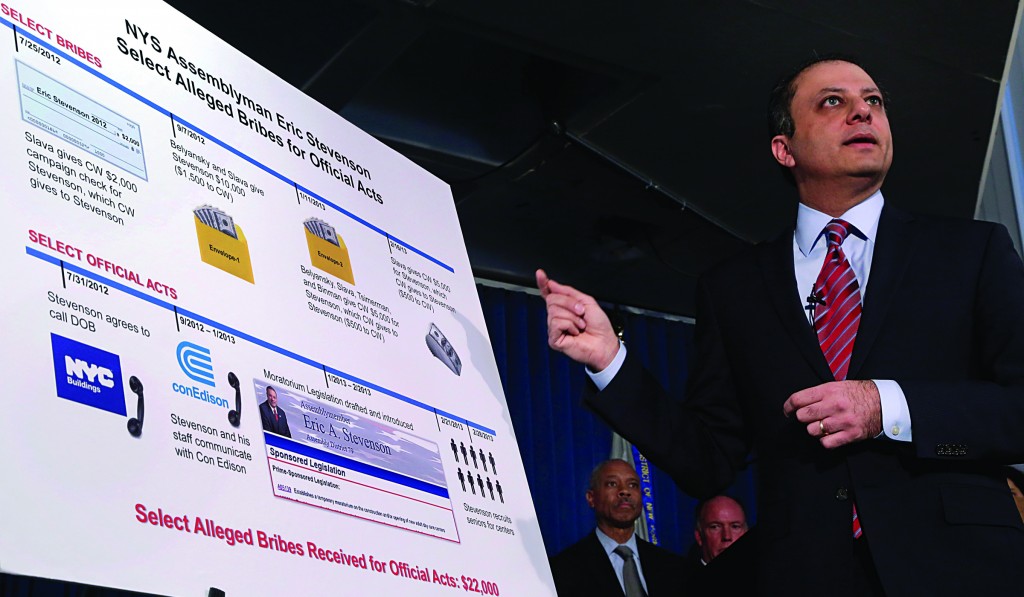 For the second time in a week, a New York State politician was arrested in a bribery scandal, leading a prosecutor to say Thursday that political corruption in the state “is indeed rampant” and people should be angry about it.

Assemblyman Eric Stevenson, a Democrat, was arrested in a bribery investigation in which another state assemblyman, Nelson Castro, cooperated against him.

Stevenson and four businessmen were charged in part with conspiring to pass a bill in the state legislature to protect a new Bronx senior center from competitors for three years to give the center a monopoly against other facilities that might want to offer meals, social activities and supervision for the elderly and disabled.

Silver called for the resignation of Stevenson as well, saying the charges he faced would be a “clear violation of the public trust and cannot be tolerated.” Court papers filed in federal court in Manhattan also revealed that an unidentified cooperating witness in the case had once been an Assembly candidate.

At a news conference Thursday, U.S. Attorney Preet Bharara highlighted some of Stevenson’s quotes heard by investigators, including one in which the assemblyman allegedly said “if half of the people up here in Albany was ever caught for what they do … they … would probably be in [jail].”

The prosecutor who two days earlier characterized corruption in New York politics as “downright pervasive” said Thursday that “it becomes more and more difficult to avoid the sad conclusion that political corruption in New York is indeed rampant and that a show-me-the-money culture in Albany is alive and well.”

Bharara added: “The people of New York should be more than just disappointed. They should be angry. … When it is more likely for a New York state senator to be arrested by the authorities than to be defeated at the polls, they should be angry. And they also should ask some pointed questions: Given the allegations in today’s case, how many other pending bills were born of bribery? And worse, how many passed bills were born of bribery?”

Attorney Murray Richmond, who is representing the 46-year-old Stevenson on bribery, conspiracy and other charges, said he had known his client’s family for 50 years, including Stevenson’s grandfather, who also served in the Assembly. Richmond said he was to see these charges and convinced that after deliberation and review of the evidence, he’ll be exonerated.” Stevenson, released on $250,000 bail, declined to comment.

In a statement, Castro said he agreed to cooperate in probes “aimed at rooting out public corruption” after he was indicted in a perjury case brought by Bronx District Attorney Robert Johnson that stemmed from his activities before he was elected to the Assembly. Bharara said Johnson telephoned him to ask that federal and state authorities work the investigation together.

“It is my sincere hope that my constituents remember me most for the good I have done as their representative, rather than for the poor example I set as a candidate,” Castro said.

In court papers, the government said Stevenson accepted more than $22,000 in bribes in exchange for drafting, proposing and agreeing to enact legislation to aid his co-defendants’ businesses, including an adult day care center in the Bronx, the “Westchester Avenue Center,” which opened a month ago. In return for bribes, the government said Stevenson agreed to propose legislation that would ban new adult centers from opening for three years.

Bharara called the allegation that legislation would be affected by bribes “an especially breathtaking bit of corruption, even by Albany standards.”

The government said it had audio and videotaped conversations between the defendants, including a videotape of Stevenson accepting an envelope containing $10,000 in cash last September outside a steak house after the assemblyman had balked at receiving the money inside the restaurant because he feared it would be captured by the business’s video surveillance system.

According to court papers, law enforcement officers videotaped Stevenson stuffing the envelope into his front pants pocket and covering the pocket with the bottom of his shirt.

Besides the steak house, Bharara said cash was also exchanged at the cooperating witness’ car and in the bathroom of an Albany hotel.

“Assemblyman Stevenson was only too happy to oblige for the right price,” Bharara said. “He basically said, ‘Show me the money.’ … And the money was shown over and over and over again.”

The government described Stevenson as growing increasingly paranoid about the possibility of being caught as the plot proceeded in the ensuing months, although at times he seemed worried, noting that one politician had “died in jail” and saying it was important not to “put yourself in jail” and other times boastful of the seemingly light prison sentences given to corrupt politicians. Referring to one, he said: “They got him in the, the easiest federal penitentiary you could ever be in,” the government alleged.

In a Jan. 27 conversation described in court papers, the government quoted Stevenson as expressing concern that one of the businessmen he was dealing with might be cooperating with police.

According to court papers, Stevenson said he was worried that they could “bring me down.” If so, “somebody’s going to the cemetery,” the government said Stevenson told a cooperator in a recorded conversation.