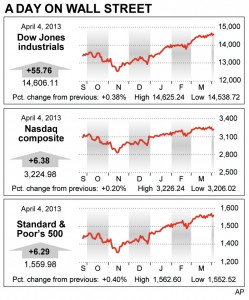 The Dow Jones industrial average closed higher Thursday, regaining half of its decline the day before as buyers returned to the market.

The Dow rose 55.76 points, or 0.4 percent, to close at 14,606.11. On Wednesday it dropped 111, its worst fall in more than a month, following weak reports on hiring and service industries. The decline was enough to make stock prices seem attractive again.

“Investors have been looking for a reason to sell, given the rally we’ve seen in the market in the past couple of months,” said Joseph Tanious, a global market strategist at JPMorgan Funds. “Today, you’re seeing investors come back into the market and buy on the dip.”

The stock market got off to a strong start in 2013. The Dow climbed 10 percent in the first three months of the year and closed at a record high of 14,662 Tuesday. Investors have been encouraged by signs that the housing market was recovering and that hiring was picking up.

The market maintained a steady advance through the first two weeks of March, but since then indexes have been alternating between gains and losses on a nearly daily basis as investors’ confidence in the U.S. economic recovery weakened.

There was more discouraging economic news Thursday that held the market in check. The number of Americans seeking unemployment aid rose to a four-month high of 385,000 last week, the Labor Department said. The government will issue its employment report Friday, which investors look at closely for insight into how the U.S. economy is doing.

So-called defensive industries such as health care, consumer staples and utilities, which have stable earnings and dividends, have led the market rally this year. Investors have been seeking out stocks that give them characteristics similar to debt investments after a powerful rally in bonds over the last year pushed yields sharply lower. The yield on the benchmark 10-year Treasury note has traded below 2 percent for most of the last year.

The 10-year yield fell to 1.76 percent Thursday from 1.81 percent a day earlier, within a fraction of its lowest level of the year. The note’s yield has declined over the last month as demand for less risky assets increased following the financial crisis in Cyprus and signs of a slowdown in the U.S. The yield was as high as 2.06 percent on March 11.

Japanese stocks jumped and the yen sank after the country’s central bank announced aggressive measures for getting the world’s third-largest economy out of a two-decade slump. The Bank of Japan, under new governor Haruhiko Kuroda, surprised markets by saying it would greatly increase the country’s money supply with the goal of encouraging people and businesses to borrow and spend. The yen weakened 3.6 percent against the dollar, to 96.33 yen, while Tokyo’s Nikkei stock index rose 2.2 percent to 12,634.54.

Among stocks making big moves, electronics retailer Best Buy jumped $3.48, or 16 percent, to $25.13 after saying it would collaborate with the Korean smartphone and tablet maker Samsung to open kiosks in its stores.

Facebook rose 82 cents, or 3.1 percent, to $27.07 after the social network unveiled a new product for Android phones that will bring content to users on the phone’s home screen. More Android integration could help Facebook Inc. attract more mobile advertisers.

MetroPCS rose 16 cents, or 1.5 percent, to $11.12 after Reuters reported that Deutsche Telekom is considering amending the terms of the proposed merger between its T-Mobile USA business and local rival Metro PCS.

This article appeared in print on page 8 of the April 5th, 2013 edition of Hamodia.