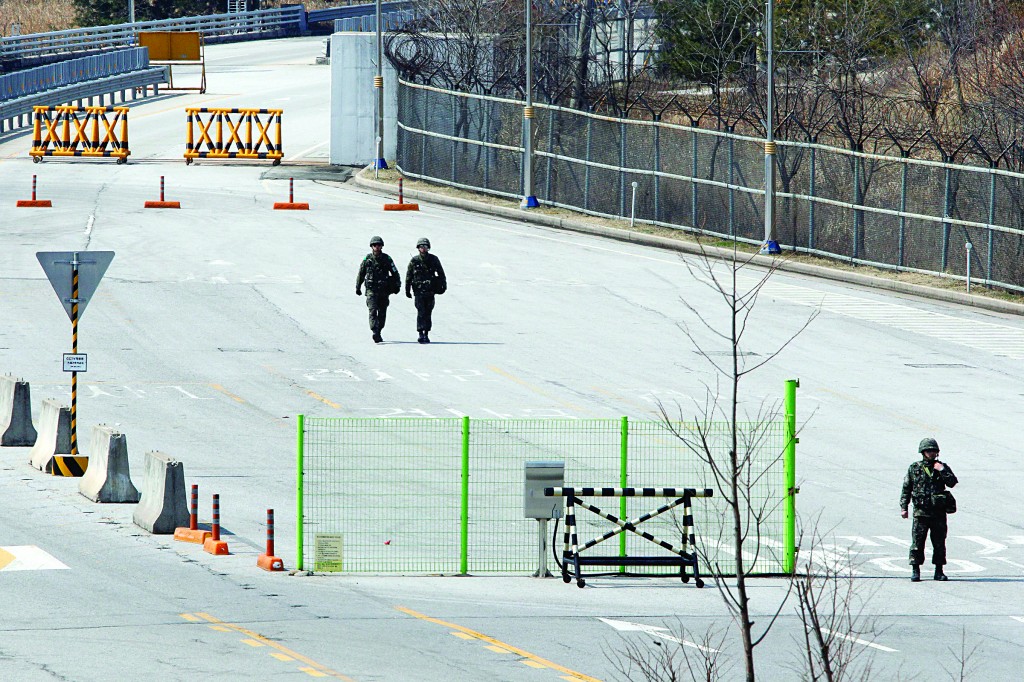 In past deadly confrontations between North and South Korea, a jointly operated industrial park stayed open, churning out goods.

But in the latest sign that North Korea’s warlike stance toward South Korea and the United States is moving from words to action, the North on Wednesday barred South Korean managers and trucks delivering supplies from crossing the border to enter the Kaesong industrial park.

It’s an announcement that further escalates a torrent of actions that analysts say is aimed at pressuring the U.S. and South Korea to change their policies toward North Korea.

The Kaesong move came a day after the North said it would restart its long-shuttered plutonium reactor and a uranium enrichment plant. Both could produce fuel for nuclear weapons that North Korea is developing and has threatened to hurl at the U.S., but which experts don’t think it will be able to accomplish for years.

The North’s rising rhetoric has been met by a display of U.S. military strength, including flights of nuclear-capable bombers and stealth jets at annual South Korean-U.S. military drills that the allies call routine and North Korea says are invasion preparations.

The Kaesong industrial park started producing goods in 2004 and has been an unusual point of cooperation in an otherwise hostile relationship between the Koreas, whose three-year war ended in 1953 with an armistice, not a peace treaty.

It has remained open despite the sinking of a South Korean warship in 2010, killing 46 people, which Seoul blamed on the North, and a North Korean artillery attack on a front-line South Korean island that year that killed four people. The North denies involvement in the ship sinking and says a South Korean live-fire drill triggered the bombardment.

Kaesong’s continued operation through those episodes of high tension, and its high economic value to impoverished North Korea, has reassured foreign multinationals that another Korean War is unlikely and their investments in prosperous, dynamic South Korea are safe.

On Tuesday, a senior South Korean government official said Seoul has a contingency plan for its citizens in Kaesong, which number over 800 on weekdays. Most South Korean managers at Kaesong return to South Korea on the weekends. The official spoke on condition of anonymity, saying he was not authorized to speak publicly to the media.

It is unclear how long North Korea will prevent South Koreans from entering the industrial park, which is located in the grim North Korean border city of Kaesong and provides jobs for more than 50,000 North Koreans who make goods such as textiles, clothing and electronic components. The last major disruption at the park amid tensions over U.S.-South Korean military drills in 2009 lasted just three days.

In Washington, Defense Secretary Chuck Hagel said in a speech at the National Defense University that the north’s rhetoric represents a “real, clear” danger to the U.S. and its Asia-Pacific allies and said America is doing all it can to defuse the situation.

State Department spokeswoman Victoria Nuland said the North’s move was “regrettable” and should be lifted. She said it only works to the detriment of North Korea, given the number of its citizens employed at Kaesong.

Seoul’s Unification Ministry spokesman Kim Hyung-suk said Pyongyang was allowing South Koreans to return home from Kaesong. Some 33 workers out of about 860 South Koreans at Kaesong returned Wednesday. But Kim said about 480 South Koreans who had planned to travel to the park Wednesday were being refused entry.

Trucks streamed back into South Korea through its Paju border checkpoint in the morning, just minutes after heading through it, after being refused entry into the North.

North Korea threatened last week to shut down the park, which is run with North Korean labor and South Korean know-how. It expressed anger over South Korean media reports that said North Korea hadn’t yet shut the park because it is a source of crucial hard currency for the impoverished country.

Some 120 South Korean companies operate factories in Kaesong producing $470 million of goods such as clocks, clothing and shoes that are trucked back to the South for export to other countries. The industrial park is crucial for the small businesses that operate there to take advantage of North Korea’s low wages but less important for the South Korean economy.

It has more significance to cash-strapped North Korea since, according to the South Korean government, wages for North Korean workers totaled some $81 million last year. On top of that, nearly all the trade between the Koreas, which totaled $2 billion in 2012, passed through Kaesong. North Korea appearing to act against its own interests with Kaesong has underlined the risks that its brinkmanship will result in even more dangerous polarization of the Korean Peninsula.