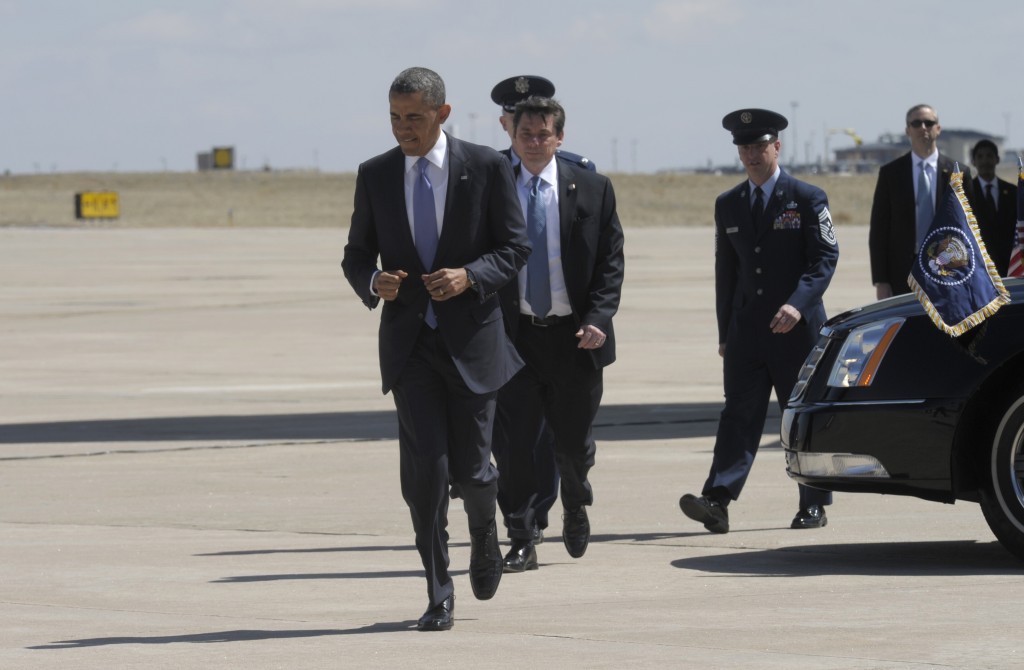 Ratcheting up pressure for Congress to limit access to guns, President Barack Obama said Wednesday that steps taken recently by Colorado to tighten its gun laws show “there doesn’t have to be a conflict” between keeping citizens safe and protecting Second Amendment rights to gun ownership.

“I believe there’s no conflict between reconciling these realities,” Obama said in remarks prepared for delivery in Denver, where he planned to step up his call for background checks for all gun purchases and renew his demand that Congress at least vote on banning assault weapons and limiting access to large-capacity ammunition magazines.

“There doesn’t have to be a conflict between protecting our citizens and protecting our Second Amendment rights,” he said, noting that it has been just over 100 days since the shooting rampage that killed 20 first-graders and six adults at an elementary school in Newtown, Conn., and reignited the national debate over access to guns.

In danger of losing congressional momentum on the issue, Obama was appearing in Colorado — which has a deep-rooted hunting tradition and where gun ownership is a cherished right — to highlight state efforts to tighten gun laws. His intent is to use Colorado’s example and public pressure to prod reluctant members of Congress to act.

Colorado recently expanded background checks for gun purchases and placed restrictions on ammunition magazines. Prospects for passage of similar measures by Congress appear bleak, largely because of concerns by conservative Republicans and moderate Democrats who come down more on the side of gun rights.

Obama said there is a middle ground.

“I think that Colorado has shown that practical progress is possible by enacting tougher background checks that won’t infringe on the rights of responsible gun owners, but will help keep guns out of the hands of dangerous people,” he said.

In Denver, Obama was meeting with law enforcement officials and community leaders at the Denver Police Academy, not far from the Aurora suburb where a gunman last summer killed 12 people in a theater. Prosecutors are seeking the death penalty for James Holmes, accused of carrying out the Aurora rampage.

Among those participating in the Denver discussion with Obama was Sandy Phillips, the mother of Jessica Redfield Ghawi, 24, who died in the Aurora shooting. She conceded that gun control is a difficult issue, and said she has spoken to numerous lawmakers in Washington who “want to do the right thing without it costing their jobs.”

She said she is counting on Obama to press the issue.

With Congress due to return to Washington after a two-week break, Obama has been scheduling high-profile events on gun legislation to push lawmakers and sustain a drive for some kind of action aimed at curbing gun violence more than three months after the massacre at Sandy Hook Elementary School in Newtown, Conn.

Last week, he called for legislation while flanked by 21 mothers who lost children to gun violence. “I haven’t forgotten those kids,” he declared then.

The Senate could begin debating gun control legislation next week.

On Monday, Obama was visiting Hartford, Conn., where state lawmakers have announced a bipartisan agreement on gun legislation in response to the Newtown shooting.

White House press secretary Jay Carney said Wednesday that efforts in Colorado and Connecticut “represent important progress on these issues and are useful models to look at as we undertake efforts in Washington.”

Obama’s trip comes a day after a study commissioned by the National Rifle Association, which opposes Obama’s gun control measures, recommended that schools have trained, armed staffers to increase security for students. The American Federation of Teachers denounced the proposal.