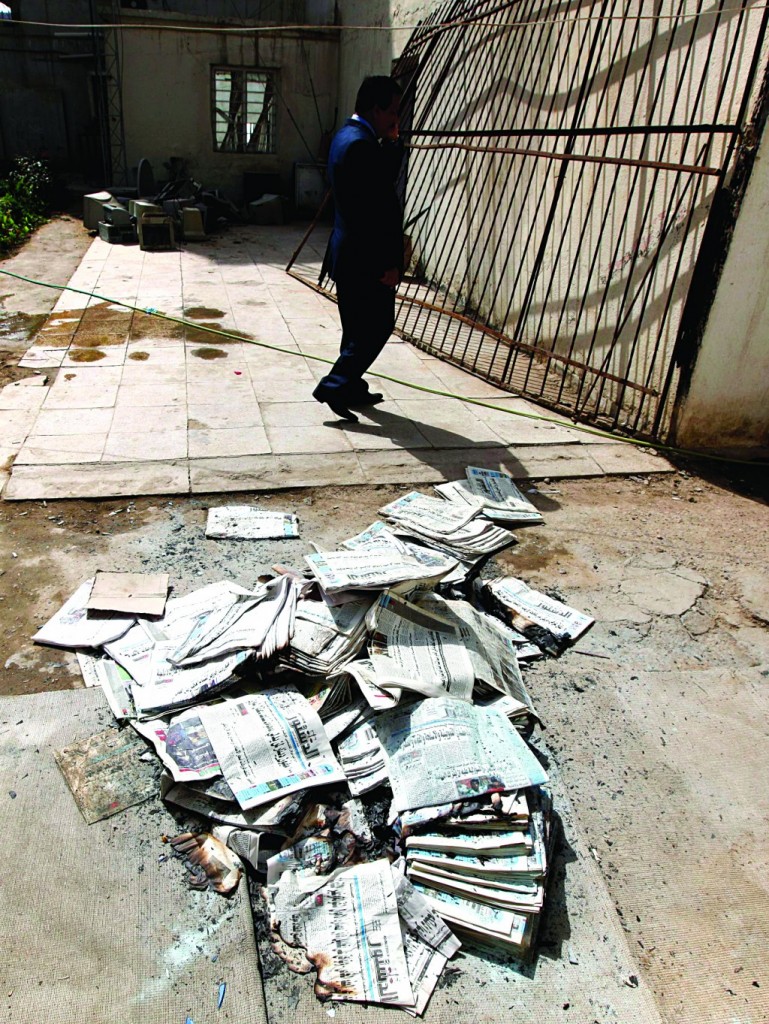 Gunmen suspected of being Shiite militiamen burst into the offices of four independent newspapers in Baghdad, smashing their equipment, stabbing and beating employees, and even hurling one reporter from a roof in the most brazen attack against journalists in Iraq this year, said staff and officials.

Two editors said they believed their assailants were members of a Shiite militia, saying the raids came after their newspapers published stories criticizing their hardline cleric-leader. It underscored the dangers facing the media in Iraq, one of the most dangerous places in the world for reporters.

“The message of the assailants was to shut mouths,” said Bassam al-Sheikh, editor of one of the attacked newspapers, Al-Dustour. “This is a dangerous precedent.”

A government spokesman condemned the attacks.

It appeared to have been sparked when the Baghdad-based dailies published stories saying that a Shiite group lead by cleric Mahmoud al-Sarkhi was trying to dominate the city of Karbala.

The city, 90 kilometers (55 miles) south of Baghdad, is home to two revered Shiite shrines. In the last decade it has witnessed power struggles between Shiite militias.

The four newspapers are considered modestly sized. The largest, al-Dustour, claims a run of 12,000 copies daily.

In response to the attacks Tuesday, blue-khaki clad police set up checkpoints through the middle-class Karradeh neighborhood, snarling traffic.

Iraq is ranked among the most dangerous places in the world for journalists, according to the New York-based Committee to Protect Journalists. At least 150 reporters and 54 support workers were killed in Iraq from the start of the U.S.-led invasion in March 2003 to the pullout of foreign troops in December 2011.

They did not have immediately updated figures for 2012.

Such attacks have been less common of late. The last major attack on reporters was the slaying of Ghazwan Anas in July 2012, who worked for a channel in the predominantly Sunni northern city of Mosul.

The New York-based group said in a March statement that Iraq has never charged a person for killing a reporter. The “impunity rate . is the worst in the world. It is 100 percent,” the statement said. “Even today, as Iraq has moved beyond conflict, authorities have shown no interest in investigating these murders.”

Iraqi government spokesman Ali al-Moussawi condemned the attack. “Security forces have taken action and some of the (assailants) have been arrested and we are interrogating them,” he said.