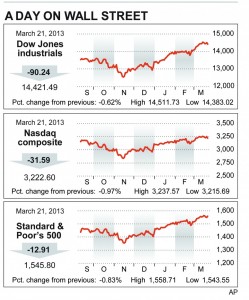 Major indexes followed European markets lower at the open and remained solidly negative all day. The Dow Jones industrial average fell as much as 129 points by mid-afternoon before paring the loss to close down 90 points.

All three major indexes felt the drag from technology stocks after Oracle reported an unexpected decline in sales in its fiscal third quarter. Oracle’s results have an outsized impact on other technology stocks because it reports earlier than most of its peers.

European markets had closed sharply lower. The main indexes in Paris and Frankfurt fell 1.4 percent and 0.9 percent, respectively, on fear that the crisis in Cyprus will intensify. The European Central Bank has threatened to end emergency support of the nation’s banks next week unless leaders can secure more funding.

The Nasdaq, which is weighted heavily toward tech stocks, fell a full percentage point. It closed down 31.59 points at 3,222.60.

Despite being down for the week, the Dow remains near a record high. Its run-up has been powered by optimism about the U.S. economy and the Federal Reserve’s easy-money policies. The Dow is up 2.6 percent this month. The S&P 500 has gained 2.1 percent in March, and is 20 points from its own all-time high set in October 2007.

Given the market’s recent strength, many analysts have been anticipating a sharp decline at the first sign of bad news — whether from Europe, corporate America or the U.S. economy.

The pullback has not materialized, said Troy Logan, managing director and senior economist at Warren Financial Service in Exton, Penn. He said today’s losses could have been much worse.

“We thought Cyprus would be the perfect opportunity for the market to step back, but it looks like the market has shrugged it off,” Logan said.

Many of his firm’s customers are seeking higher-risk investments with higher potential returns, Logan said — an indication that stocks may keep rising.

The U.S. job and housing markets continue to improve gradually, according to economic reports released Thursday morning. The Labor Department said the number of people claiming new unemployment benefits last week was roughly flat near a five-year low. Sales of existing homes rose in February to a three-year high, according to the National Association of Realtors.

The yield on the 10-year U.S. Treasury note fell to 1.92 percent from 1.96 percent earlier Thursday as demand increased for ultra-safe investments.

Outside of technology, here are some stocks that made big moves:

This article appeared in print on page 8 of the March 22nd, 2013 edition of Hamodia.