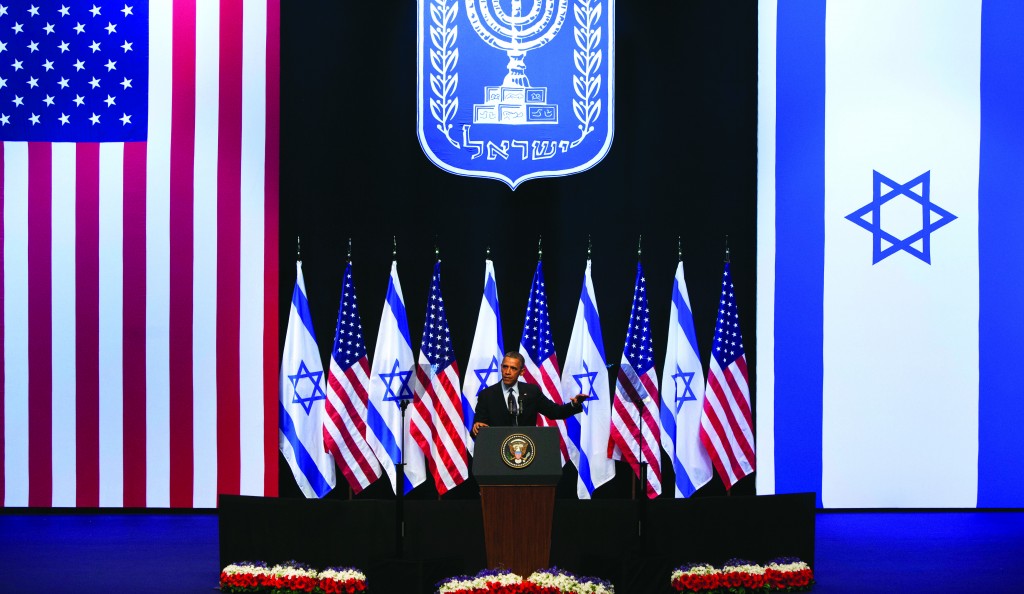 On a day when terrorist rockets landed in Sderot and Iran’s supreme leader threatened to “raze Tel Aviv and Haifa to the ground,” President Barack Obama stood on a stage in Yerushalayim and told the Israeli people, “Atem lo l’vad, you are not alone.”

Standing before an audience of Israeli university students in Yerushalayim’s Binyanei Ha’umah convention center, Obama reprised the theme of his visit — a dramatic reaffirmation
of American support and friendship in the search for peace.

The American president spoke eloquently of an embattled but invincible nation.

“Israel is faced with challenges that sense of an Israel that is surrounded by many in this region who reject it, and many in the world who refuse to accept it. That is why the security of the Jewish people in Israel is so important — because it can never be taken for granted. But make no mistake: those who adhere to the ideology of rejecting Israel’s right to exist might as well reject the earth beneath them and the sky above, because Israel is not going anywhere. Today, I want to tell you — particularly the young people — that so long as there is a United States of America, Ah-tem lo lah-vahd.”

Obama stressed in his remarks on peace, which formed the central part of his address, that peace is “the only path to true security,” that it is necessary, just and achievable.

“Given the frustration in the international community, Israel must reverse an undertow of isolation. And given the march of technology, the only way to truly protect the Israeli people is through the absence of war — because no wall is high enough, and no Iron Dome is strong enough, to stop every enemy from inflicting harm.”

Addressing skeptics of the peace process, he said, “There will be many voices that say this change is not possible. But remember this: Israel is the most powerful country in this region. Israel has the unshakeable support of the most powerful country in the world. Israel has the wisdom to see the world as it is, but also the courage to see the world as it should be…Sometimes, the greatest miracle is recognizing that the world can change. After all, that is a lesson that the world learned from the Jewish people.”

Obama called upon Arab states to “adapt to a world that has changed. The days when they could condemn Israel to distract their people from a lack of opportunity are over. Now is the time for the Arab world to take steps toward normalized relations with Israel,” he said. He asserted that Palestinian Authority President Mahmoud Abbas is a genuine partner for peace.

When Obama came to the peace section of the speech, he prefaced his  remarks by noting that not everyone in Israel will agree with what he had to say on the subject.

“But the Palestinian people’s right to self-determination and justice must also be recognized. Put yourself in their shoes — look at the world through their eyes. It is not fair that a Palestinian child cannot grow up in a state of her own, and lives with the presence of a foreign army that controls the movements of her parents every single day. It is not just when settler violence against Palestinians goes unpunished. It is not right to prevent Palestinians from farming their lands…or to displace Palestinian families from their home. Neither occupation nor expulsion is the answer. Just as Israelis built a state in their homeland, Palestinians have a right to be a free people in their own land.”

Indeed, disagreement came within minutes of the conclusion of the speech, from Jewish Home chairman Naftali Bennett, who issued a statement that “A nation cannot be an occupier in its own land.”

Bennett allowed that “Obama’s speech certainly came from a concern for Israel and from genuine friendship but the results of our previous retreat (the disengagement from the Gaza Strip) were experienced this morning in Sderot.”

“A Palestinian state is not the right way,” Bennett added.

In regard to Iran, Obama reiterated his stance that diplomacy may still suffice to prevent Iran from obtaining a nuclear bomb, but that time was running out.

“When I consider Israel’s security, I also think about a people who have a living memory of the Holocaust, faced with the prospect of a nuclear-armed Iranian government that has called for Israel’s destruction. It’s no wonder Israelis view this as an existential threat. But this is not simply a challenge for Israel — it is a danger for the entire world, including the United States. A nuclear-armed Iran would raise the risk of nuclear terrorism. It would undermine the non-proliferation regime. It would spark an arms race in a volatile region. And it would embolden a government that has shown no respect for the rights of its own people or the responsibilities of nations….

“I do believe that all of us have an interest in resolving this issue peacefully. Strong and principled diplomacy is the best way to ensure that the Iranian government forsakes nuclear weapons.  Peace is far more preferable to war.  And the inevitable costs, the unintended consequences that would come with war means that we have to do everything we can to try to resolve this diplomatically.  Because of the cooperation between our governments, we know that there remains time to pursue a diplomatic resolution.  That’s what America will do, with clear eyes — working with a world that’s united, and with the sense of urgency that’s required.”

The president also sought to refute a charge that Washington might be on the road to a policy of “containment,” resigned to a nuclear-armed Iran.

“But Iran must know this time is not unlimited. And I’ve made the position of the United States of America clear:  Iran must not get a nuclear weapon.  This is not a danger that can be contained, and as President, I’ve said all options are on the table for achieving our objectives. America will do what we must to prevent a nuclear-armed Iran.”