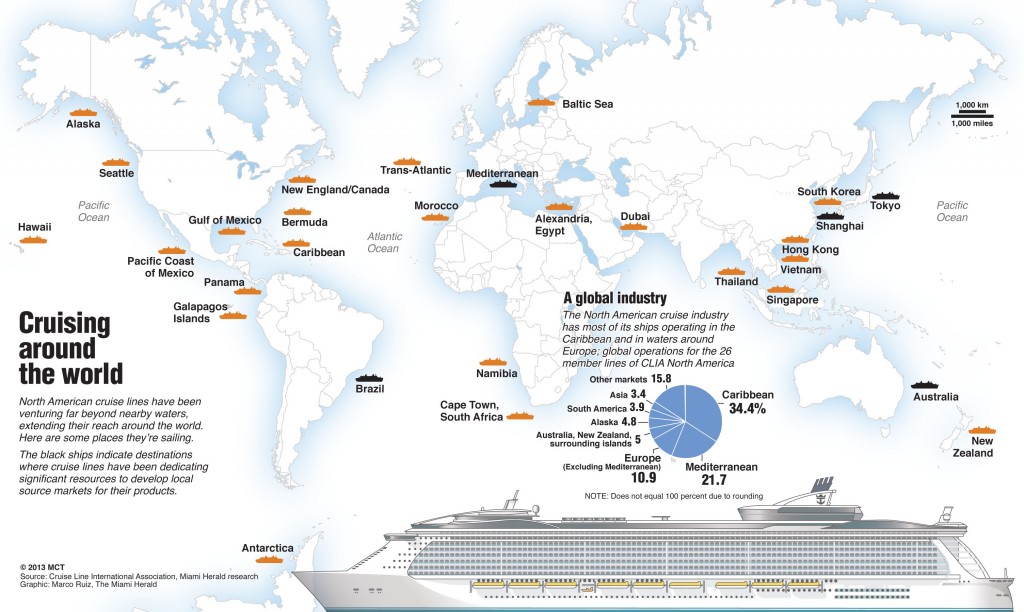 A year and-a-half before the Carnival Spirit made its October debut in Australia, where it is now based year-round, a team of marketing pros was mulling what it would take to adapt America’s “fun ship” for the land Down Under.

Re-work the menus and wine lists, for one; brew better coffee, for another. Then add more activities for the whole family, and ditch the American comedy routines, which just don’t translate.

“We call it Aussification,” said Terry Thornton, senior vice president for itinerary development and revenue planning at Carnival Cruise Lines. Last fall, the Miami-based line introduced the 2,124-passenger ship – the largest to home port in Australia – with the intention of filling just about all those berths with locals.

Among the foreign ports and tourism groups seeking to expand visitor numbers is the Hong Kong Tourism Board, which is spreading the word about the new $1 billion Cruise Terminal at Kai Tak, designed by Lord Norman Foster, that opens in June.

Bill Flora, U.S. director for the board, said the destination is eager to spread the word about the new terminal, which will be able to accommodate two 5,400-passenger ships at once when it is fully opened next year, to cruise line executives and itinerary planners. Flora said the demand to cruise from Hong Kong has been greater than capacity, but that will soon change.

“Cruising is a growth market overall, and it especially has monstrous potential when you consider China as a source market for cruising in the future,” Flora said. “Because Hong Kong is the cruise hub of Asia and so close to mainland China, it will be a perfect opportunity for us to be able to enjoy some of that upcoming growth.”

China’s development and Carnival’s move into Australia illustrate how the world’s largest cruise lines are increasingly biting off bigger pieces of the planet. This year, the luxury Seabourn line is heading to Antarctica for the first time, with five days of landings planned on each of four 20-plus day trips. It’s an itinerary that is requiring Seabourn to add Zodiac inflatable boats for the landings, said President Rick Meadows, as well as expedition leaders and even photographers to coach passengers on getting the best shot.

“One of the things that we pay close attention to is our guests and where they tell us they want to go,” Meadows said. “We have heard ‘Antarctica’ for years.”

Asia is on most lines’ must-visit list, with Azamara Club Cruises making its first call on Myanmar, SeaDream Yacht Club venturing for the first time into Asian ports from Sri Lanka to Hong Kong and Holland America Line recently announcing it will increase its capacity in Asia with two ships for the 2013-14 season.

Celebrity Cruises just announced its “world tour” for 2014-15, which includes sailings to ports on all seven continents. And the luxury Silversea Cruises, which is based in Monaco but has U.S. headquarters in Fort Lauderdale, Fla., is launching Silver Galapagos in the Galapagos Islands in September.

And for U.S.-based operators that have long catered to North Americans, the experiences abroad are providing an education in globalization – and risk management.

“The world is a big place and stuff happens, so you never know when you’re in the right or the wrong area,” said Larry Pimentel, a longtime cruise industry executive who heads up the boutique Azamara Club Cruises line for Royal Caribbean Cruises Ltd. “You never know when more domestic itineraries are a blessing or it’s the year when everyone wants to go to the place where you’re not.”

Last year provided a double whammy of an example in Europe, where North American lines have been increasing deployment: First, the Costa Concordia struck rock and capsized in Italian waters in January, sending demand and cruise fares in the region plummeting. Then European economies started tanking, pulling down profits in the region.

The year before, unrest related to the Arab Spring in the Middle East and North Africa forced cruise operators to change hundreds of sailings at great cost – bad news for Africa, which gets few ocean cruise visitors outside of Egypt, Tunisia and occasional long voyages. Also in 2011, the earthquake and tsunami in Japan disrupted scheduled sailings to the region.