Israel The Visit Was a Success — Before It Began
Israel 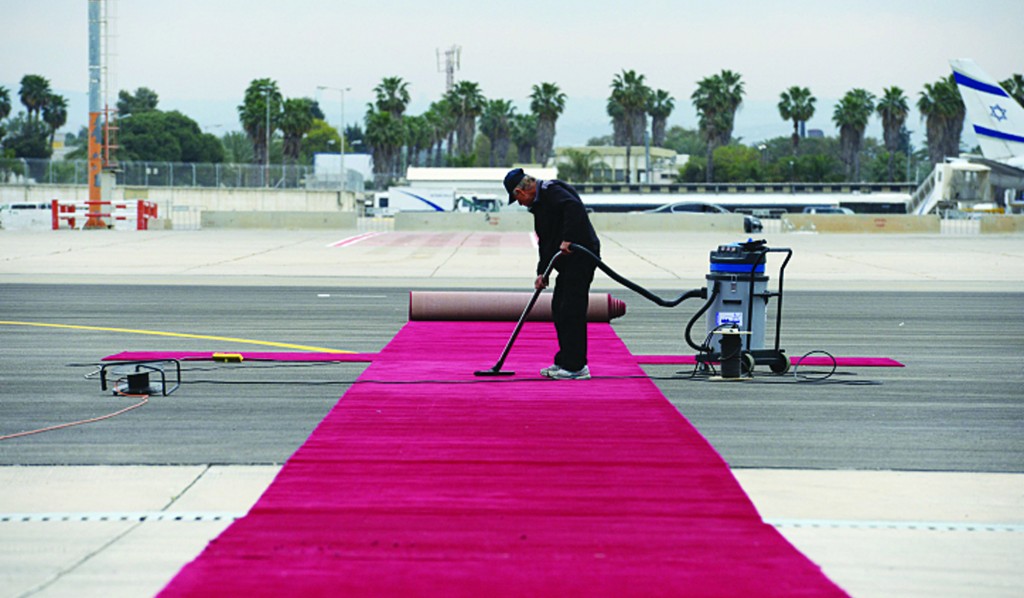 President Barack Obama visits Israel this week. Teams from both countries have spent the past month planning the visit down to the last detail, including its conclusions. Neither side can allow this visit to fail. It will likely bring about a renewal of talks with Abu Mazen. But what’s beyond that?

Anyone in the Israeli media questioning whether President Obama’s visit to Israel will be a success is living in dreamland. Obama’s visit — from Wednesday to Friday — has already been rendered a resounding success, even if it hasn’t begun yet.

Brigadier General (Res.) Udi Dekel, today a senior researcher in the National Security Research Institute, and a former head of the negotiating team with the Palestinians under Prime Minister Ehud Olmert, thinks that President Obama’s visit to Israel, along with the new government, presents an opportunity for the U.S. and Israel to draft a joint strategy to deal with the challenges facing the Middle East at this time.

The two countries, Dekel says, are worriedly observing the trends in the region: Iran is doggedly moving towards obtaining military nuclear capability; in Syria, the civil war rages on, and there is fear that strategic weapons may fall into radical hands; there’s no progress on the Palestinian front; there’s been no resolution on the Turkey issue; and political Islam continues to rise, especially with the Muslim Brotherhood having taken over Egypt.

The Middle East, Dekel stresses, is in the midst of complex processes that are hard to control or influence. The complexity of these changes has influenced Israel’s policy, and they have not taken any dramatic steps that would mold the future. It has also affected President Obama’s policy; he believes the United States has only limited power to handle the world’s problems, especially in the Middle East. As such, the direction that America seems to be taking is to distance itself from resolving problems in the Middle East — by withdrawing American forces from Iraq and Afghanistan, rejecting a military option in Iran and refraining from intervening in Syria.

However, the time is nearing when decisions will have to be made on how to deal with these issues. Otherwise, the Middle East may deteriorate into complete chaos. Israel must therefore strategically coordinate with the Obama government on how they will proceed together.

Dekel believes that Israel and the United States share several basic interests. However, there are also certain interests that clash, because of a difference in views on how to respond to challenges. The United States and Israel both want to prevent Iran from gaining nuclear weapons, but they differ on how to do so. They both expect Assad’s regime to fall and Syria to disconnect from the radical axis led by Iran. They both want to preserve the peace agreement with Jordan and for Jordan to remain stable.

Both countries have come to terms with the Muslim Brotherhood government in Egypt.

The United States and Israel do not see eye-to-eye regarding the Israel-Palestinian conflict, yet Israel is willing to return to the negotiating table without preconditions.

Dekel thinks the president has come to Israel to complete a process that has already begun — to draft a joint regional strategy between the two countries.

This strategy contains several primary principles: 1) the United States is not disconnecting from the Middle East and is committed to preventing it from falling into radical Islamic hands; 2) strengthening strategic and security cooperation is essential; 3) full transparency is necessary between the two governments to avoid steps that will surprise the other side; 4) the U.S. will refrain from challenging Israel with the demand to suspend construction in Yerushalayim. In exchange, Israel will adopt a restrained policy of construction, limited to settlement blocs; 5) committing to constant dialogue to determine a list of priorities when responding to the challenges — diplomatic, security, economic and social; 6) recognizing a mutual understanding that the Middle East doesn’t believe in words, just action, which is why it is necessary to display willingness to use force.

On the basis of these principles, the two countries can draft a strategic agreement that will enable them to cooperate and deal with several challenges at once.

Dekel says the first issue at hand must be stopping Iran’s nuclear ambitions. Obama should provide Israel with guarantees that will realize the strategy of prevention and not deteriorate into containment.

It’s reasonable to assume that the two countries will find mutual ground on Iran. Israel will probably have to display flexibility on uranium enrichment, as long as the enriched material does not exceed 3.5 percent and will not accumulate or be stored in Iran. The sanctions will probably continue.

The second issue that must be addressed is the Palestinian front. The prime minister must promise Obama that he will make every effort to renew negotiations. Israel will make it clear that the chances of achieving a permanent agreement are slim at this time. With that, the prime minister must present a trio of options: willingness to return to the negotiating table with no preconditions and to discuss all issues; alternatively, he can offer to negotiate a series of interim agreements en route to a final status agreement; and finally, if all else fails, state that he will use the unilateral option — which means a voluntary evacuation of certain areas, while allowing the IDF to operate freely, and disconnecting from the PA, while making sure it does not collapse.

The third front has to be building a plan for the day after Assad. In the short term, there must be cooperation to prevent chemical and biological weapons from being used and from falling into the hands of Hizbullah and other radical elements.

Fourth, the two countries must discuss how to stabilize the region around Syria to reduce the negative repercussions of the fall of Assad’s regime. This especially applies to Jordan, which is at risk because of a weak economy. Jordan is a regional anchor of stability. Turkey also plays a role in maintaining stability in this region, and a formula for reconciliation between Israel and Turkey should be found. An American-Jordanian-Turkish alliance should also work to ensure that Iraq does not collapse or fall under Iranian influence.

The fifth and final front is ensuring stability in Egypt and the Sinai. The Americans should get together a coalition of countries that will help restore Egypt’s failing economy under certain conditions, such as preserving the peace treaty with Israel, cracking down in Sinai and halting the flow of weapons into Gaza.

Obama Doesn’t Really Have a Lot to Do Here

In contrast to what many think, the differences between Yerushalayim and Washington on most issues are minor. On some subjects, those differences revolve around the “how,” not the “what.” Preliminary meetings between the organizing committees have drawn conclusions on most of the issues, which will leave Obama time for plenty of things besides diplomatic discussions.

As Obama arrives, Israel and the United States are enjoying a level of cooperation that has never been stronger in areas of security.

Besides the Iranian issue and the Palestinian conundrum, on all other matters there are full understandings between the two governments, which was not the case at the beginning of President Obama’s term.

Since then much water has flowed down the Nile, the Euphrates and the Potomac.

If, in the past, Obama expressed doubt as to the importance of Israel’s contribution to American security, today he knows that little Israel provides the United States with many security assets that Washington would have no other way of obtaining.

But that doesn’t mean he has no criticism of Israel and wouldn’t want it to change certain things. That’s why he’s come. Israel has done a great deal towards meeting his demands; Israelis will likely be surprised when they learn what Netanyahu has conceded.

Since 9/11, the Americans realize that Israel is their staunchest ally — and indeed a leader — in fighting terrorism. And in order to be able to fight terrorism, America needs good intelligence and Israel is the primary provider of that information that can protect America.

It’s not for naught that America pays Israel back in the form of development and production of weapons. That is where the Americans can help the Israelis, who help them in many other ways.

In the past three years, the Chairman of the Joint Chiefs of Staff U.S. Army General Martin E. Dempsey has visited his Israeli counterparts more than any other country, except countries where American soldiers are deployed. Israeli security officials have traveled to Washington more than to any other country. This indicates very close, very confidential, cooperation.  With a little luck, it is possible that the conflicts of the past are, at long last, almost entirely behind us.