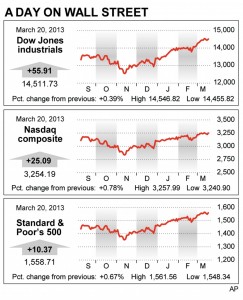 Fear of a revived debt crisis in Europe faded from the stock market Wednesday, freeing the Dow Jones industrial average to touch an all-time high.

After dipping Monday on concerns that Cyprus would become the latest European nation to stir fiscal chaos, the Dow posted its second straight day of gains.

Stocks traded steadily higher for most of the day and spiked after the Federal Reserve said it will continue with aggressive measures to boost the economy. Fed Chairman Ben Bernanke said that Cyprus crisis posed no major risk to the U.S. economy.

The Dow was up 44 points shortly before the Fed announcement. It rose as much as 91 points shortly after the Fed released its policy statement at 2 p.m., touching an all-time high of 14,546 at 2:25 p.m.

The Fed said the U.S. economy has strengthened after pausing late last year, but still needs support from the central bank. The Fed plans to continue buying $85 billion in bonds per month indefinitely to keep long-term borrowing costs down and spur investment. It also said it would keep short-term interest rates at record lows, at least until unemployment falls to 6.5 percent.

Unemployment fell last month to 7.7 percent, the lowest in four years. The Fed doesn’t expect the rate to reach its target until 2015.

Stock markets were little changed Tuesday despite rising uncertainty in Cyprus. Anyone watching “would conclude that the market decided Cyprus is overblown as an issue,” said Brian Gendreau, a strategist at Cetera Financial Group.

Gendreau said traders had been concerned about what precedent might be set by Cyprus’ efforts to avoid a crisis. A plan to seize money from bank savings accounts was met with outrage and was rejected Tuesday by the island nation’s parliament.

The nation’s unusual status as an international financial haven makes it an unlikely roadmap for future rescue efforts.

“I think the market’s going to start looking at other things,” he said.

Cyprus was negotiating with international lenders, seeking support for its ailing financial system. Without a bailout deal, Cyprus’ banks could collapse, devastating the country’s economy and potentially forcing it to exit the euro currency group. That could roil global financial markets.

Attention had returned to Europe this week after several months’ respite, during which traders focused on the strengthening U.S. economy and drove stocks to multi-year highs.

Over the previous two years, concerns about a breakup of the euro currency often dominated trading of U.S. stocks. The jitters receded after central banks provided enough extra cash to help prop up Europe’s commercial banks.

Among stocks making big news was FedEx. The shipping company reported sharply lower quarterly earnings and said it will cut capacity to Asia. FedEx is seen as a bellwether for the broader economy, because air shipments are tied closely to the pace of business activity.

Adobe soared after reporting strong first-quarter earnings. The company, which makes Adobe Reader and Photoshop, said it has picked up more subscriptions to online versions of its software products. The stock rose $1.71, or 4.2 percent, to $42.46.

Among the other stocks making big moves:

This article appeared in print on page 8 of the March 21st, 2013 edition of Hamodia.