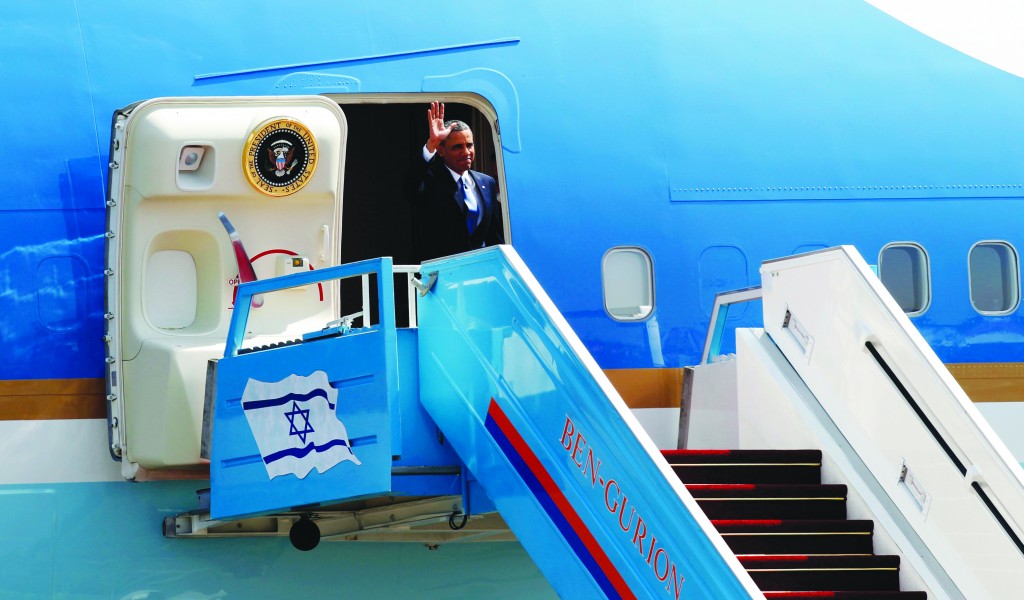 U.S. President Barack Obama’s second chance at Mideast peacemaking began on Wednesday very differently from the first one four years ago when he went to Cairo to make overtures to the Arab world while bearing down on Israel for concessions.

This time, Yerushalayim was chosen to lead off his foreign travels in the second term, and the reception was as warm and appreciative as Israeli officialdom could make it.

The theme of the welcoming speeches of Israeli Prime Minister Binyamin Netanyahu and President Shimon Peres on the red carpet at Ben Gurion International Airport was gratitude — to America in general, and Obama in particular for their friendship and support for Israel. Indeed, the Israeli leaders were effusive, each saying six “thank- you’s” in their brief welcoming speeches.

Obama, for his part, spoke of the Jewish people’s 3,000-year connection to the land, stating that theirs was a tale of redemption “unlike any other in history.”

“Thank you for this incredibly warm welcome.  This is my third visit to Israel so let me just say tov lihiyot shuv ba’aretz,” he declared at the arrival ceremony.

The president sounded the theme of his visit, “an opportunity to reaffirm the unbreakable bond between our nations, to restate America’s unwavering commitment to Israel’s security and to speak directly to the people of Israel and to your neighbors.”

“I am confident in declaring that our alliance is l’netzach, eternal, is forever,” he said.

“We stand together because peace must come to the  Holy Land,” Obama said, saying that while the U.S. was “clear-eyed about the difficulties of making peace,” it hasn’t given up.

About 1,000 people were on hand at the airport to greet Obama as he stepped off Air Force One into the mild, pre-Pesach sunshine. After briefly embracing Netanyahu, he exchanged smiles and handshakes with Sephardic Chief Rabbi Shlomo Amar and Ashkenazi Chief Rabbi Yona Metzger and the waiting ranks
of newly-appointed ministers, though there were ten fewer hands to shake than in the previous government.

Obama’s three-day state visit will be replete with the rhetoric of goodwill and symbols of the Jewish presence in the land of Israel. On the president’s itinerary are trips to Yad Vashem, Mount Herzl and the Israel Museum, where he will view the 2,000-year-old Dead Sea Scrolls.

Whatever discussions of substance transpire — concerning Iran, Syria, the Palestinians — will be behind closed doors in meetings with Netanyahu, Palestinian Authority President Mahmoud Abbas and Jordan’s King Abdullah II. But for the public so far, it looks like mostly ceremony.

Before being flown by helicopter to the capital for meetings and dinner, Obama was shown an Iron Dome battery — transported to the proximity of the airport for the occasion. It was also an opportunity for the kind of banter that may signal a warming trend in the Obama-Netanyahu relationship. Obama was instructed by an official to “follow the red line” marked on the tarmac as he set off to see the anti-missile array. Standing alongside Netanyahu, Obama quipped: “He’s always talking to me about red lines. So this is all a psychological ploy.”

Obama also commented on how nice it was just “to get away from Congress” for a while.

When a reporter asked Obama for his latest assessment of the situation in Syria, he dodged the question, saying, “You know, there’s a press conference after this.”

“You’ll have your turn,” Netanyahu chimed in with a smile.

As Israelis warmly greeted Obama, Palestinians held several small protests, the Associated Press reported. Demonstrators in Gaza burned posters of Obama and U.S. flags. About 200 activists put up about a dozen tents in the E1 area outside the capital, where Israel has announced plans to build.

There were a few discordant notes from Israelis, as well. Former Knesset Speaker Reuven Rivlin (Likud-Beiteinu) termed Obama’s decision not to speak in the Knesset as “worrying.”

“Three American presidents have spoken on the Knesset podium, as well as [former Egyptian president Anwar] Sadat and leaders from Europe,” Rivlin said. “President Obama should speak to the people of Israel through its elected representatives.”

According to Rivlin, Obama’s decision not to speak in the Knesset is a cause for concern because it shows that he does not have confidence in the representatives of the nation to which he is speaking.

Presidents Jimmy Carter, Bill Clinton and George W. Bush have addressed the Knesset in the past.

At the request of Netanyahu and National Security Council leader Yaakov Amidror, a promise was extracted from MKs not to interrupt the U.S. president.

“Unfortunately, despite these agreements, which were reported to the Americans, President Obama decided not to visit the Knesset, a decision which is in bad taste,” Rivlin said.

Jewish residents in the Old City of Yerushalayim are feeling some of the brunt of the extremely heavy security. One individual who lives there told Arutz Sheva they are about to find themselves under a virtual “siege.”

Residents of the Jewish Quarter will have to walk if they want to go anywhere. Food — at least bread and milk, which are delivered daily — is going to be hard to find. “All the stores in the neighborhood were told that there would be no more deliveries for the rest of the week. Tuesday was essentially our last shopping day before Pesach,” he said.

During months of elaborate planning, diplomatic and security officials prepared for every eventuality — at least those they could think of. But one they didn’t think of happened.

While Obama’s special armored car was waiting for the president to arrive, it was filled with diesel fuel instead of gasoline. A replacement limousine had to be flown in from neighboring Jordan.

The owner of a local tow-truck company, Moti Matmon, told the British Daily Telegraph that the U.S. Consulate in Yerushalayim had asked him to recover the vehicle.

“They told me that this was Obama’s car,” he told the newspaper.

“They didn’t say what had happened to it. They just said it had got stuck. Only the mechanic was there when I arrived. The driver had left in another car. The whole thing was very funny.”

Matmon said the limousine was being repaired at a garage in the capital.