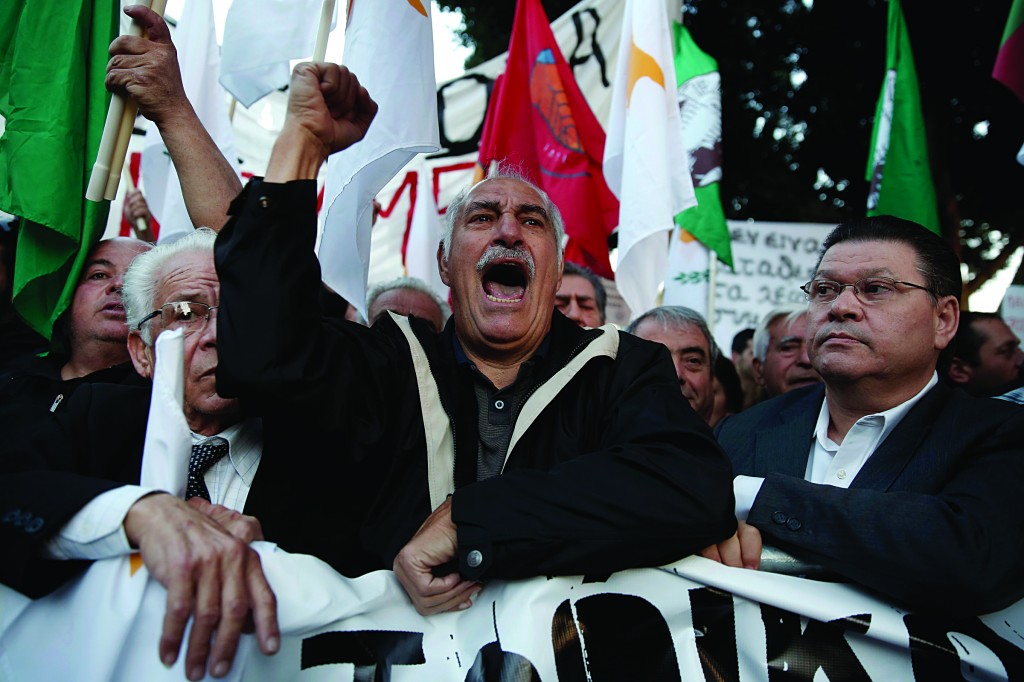 Cyprus’s parliament overwhelmingly rejected a proposed levy on bank deposits as a condition for a European bailout on Tuesday, throwing euro zone efforts to rescue the latest casualty of the currency area’s debt crisis into disarray.

The vote by the small state’s legislature was a stunning setback for the 17-nation euro zone, after lawmakers in Greece, Portugal, Ireland, Spain and Italy had repeatedly accepted unpopular austerity measures over the last three years to secure European aid.

The rejection, with 36 votes against, 19 abstentions and one absence, brought the east Mediterranean island, one of the smallest European states, to the brink of financial meltdown.

EU countries said before the vote that they would withhold 10 billion euros ($12.89 billion) in bailout loans unless depositors in Cyprus shared the cost of the rescue, and the European Central Bank has threatened to end emergency lending assistance for teetering Cypriot banks.

But jubilant crowds outside parliament broke into applause, chanting: “Cyprus belongs to its people.”

“The voice of the people was heard,” said Andreas Miltiadou, a 65-year-old pensioner among the demonstrators.

Newly elected President Nicos Anastasiades earlier told reporters he expected parliament to reject the tax on bank deposits, “Because they feel and they think that it is unjust and it’s against the interests of Cyprus at large.”

Europe’s demand at the weekend that Cyprus break with previous EU practice and impose a levy on bank accounts sparked outrage among Cypriots and unsettled financial markets.

Anastasiades refused to accept a levy of more than 10 percent on deposits above 100,000 euros, which meant taxing smaller accounts too. That would have hurt ordinary savers with deposits that they thought came with a state guarantee.

Cypriot Finance Minister Michael Sarris flew to Moscow on Tuesday to seek Russian financial assistance. He denied by text message reports that he had resigned, which rattled nerves as lawmakers were poised to vote.

Stunned by the backlash, euro zone finance ministers urged Nicosia on Monday to avoid hitting accounts below 100,000 euros, and instead increase the levy on big accounts, which are unprotected by the state deposit guarantee.

The European Union and International Monetary Fund are demanding Cyprus raise 5.8 billion euros from depositors to secure its bailout, needed to rescue its financial sector.

A revised draft bill would have exempt savings under 20,000 euros from the planned 6.75 percent levy on deposits of less than 100,000 euros, leaving a shortfall, but that was not enough to sway lawmakers, even in the ruling party, to accept the tax.

French Finance Minister Pierre Moscovici said the euro zone could not lend Cyprus any more, since the country’s debt would become unmanageable.

“Above 10 billion euros we are entering into a size of debt that is not sustainable,” Moscovici told reporters in Paris.

International market reaction has been muted so far but that might change.

“In the very short term, this will be a small victory for the more rational observers who had looked at this move as, frankly, outrageous … But it leaves [a source of many troubles] wide open,” said Mike Moran, senior currency strategist at Standard Chartered in New York.

Anastasiades has continued to resist raising the levy on big deposits — many held by foreigners including rich Russians — fearing for the island’s banking business model and reputation as a safe offshore financial haven.

He asked the EU for more aid during a telephone conversation with German Chancellor Angela Merkel on Monday.

Some Cypriots hope they could instead get aid from Russia, which has bailed out Cyprus in the past. Many Russians keep their money in Cyprus and operate businesses from there.

Russian authorities have denied rumours that the Kremlin might offer more money, possibly in return for a future stake in Cyprus’s large but as yet undeveloped offshore gas reserves, which have raised the island’s strategic importance.

An influx of Russian money and influence since the collapse of the Soviet Union has led some Brussels officials to complain privately that Cyprus acts at times as a “Trojan donkey” for Moscow inside the European Union since it joined in 2004.

Stunned Cypriots emptied cash machines over the weekend and banks are to remain shut on Tuesday and Wednesday to avoid a bank run. The island’s stock exchange also suspended trading for another two days.