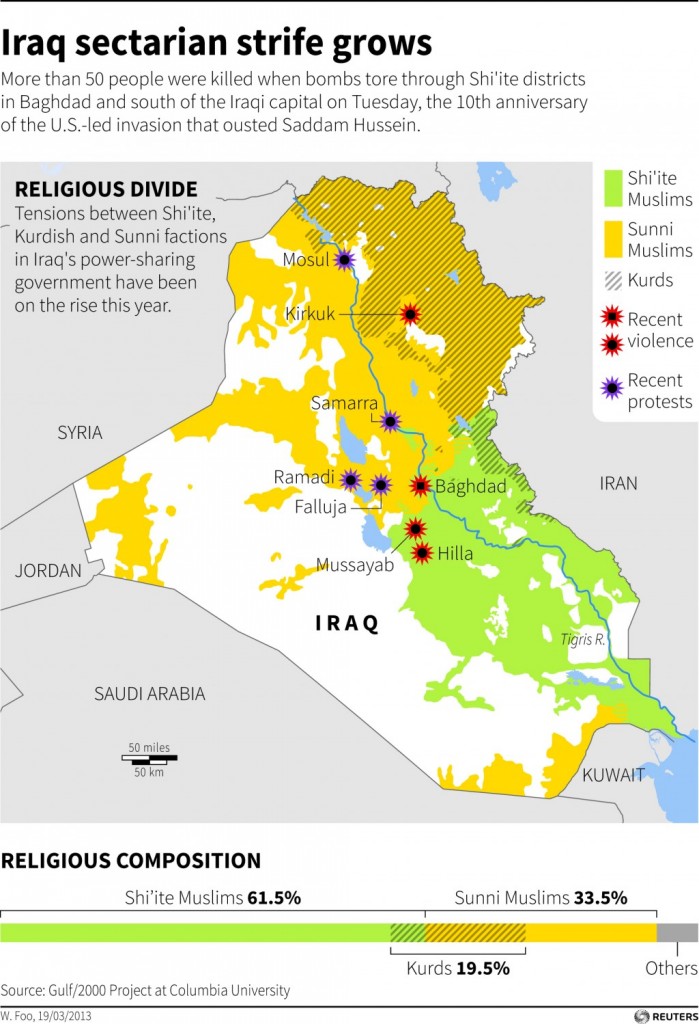 More than a dozen car bombs and suicide blasts tore through Shi’ite Muslim districts in the Iraqi capital Baghdad and other areas on Tuesday, killing nearly 60 people on the 10th anniversary of the U.S.-led invasion that ousted Saddam Hussein.

Sunni Islamist insurgents linked to al-Qaida are regaining ground in Iraq, invigorated by the war next door in Syria and have stepped up attacks on Shi’ite targets in an attempt to provoke a wider sectarian confrontation.

One car bomb exploded in a busy Baghdad market, three detonated in the Shi’ite district of Sadr City and another near the entrance of the heavily fortified Green Zone that sent a plume of dark smoke into the air alongside the River Tigris.

A suicide bomber in a truck attacked a police base in a Shi’ite town south of the capital, and another blew himself up inside a restaurant to target a police major in the northern city of Mosul.

“I was driving my taxi and suddenly I felt my car rocked. Smoke was all around, people were running and shouting everywhere,” said Ali Radi, a taxi driver caught in one of the blasts in Baghdad’s Sadr City.

Now a decade after U.S. and Western troops swept Saddam from power, Iraq still struggles with insurgents, sectarian friction and political feuds among Shi’ite, Sunni and Kurdish factions who share power in the government of Shi’ite Prime Minister Nuri al-Maliki.

In a sign of concern over security, the cabinet on Tuesday postponed local elections in two provinces, Anbar and Nineveh, for up to six months because of threats to electoral workers and violence there, according to Maliki’s media adviser Ali al-Moussawi. The polls will go ahead elsewhere on April 20.

No group claimed responsibility for Tuesday’s attacks, but Islamic State of Iraq, a wing of al- Qaida, has vowed to take back ground lost in its war with U.S. troops. This year the group has carried out a string of high-profile attacks.

Violence is still below the height of the sectarian slaughter that killed tens of thousands after Sunni Islamists bombed the Shi’ite Al Askari shrine in 2006, provoking a wave of retaliation by Shi’ite militias.

But security officials say al- Qaida’s local wing is regrouping in the vast desert of Anbar province bordering Syria and suicide bombers have carried out attacks nearly twice a week since January, a rate not seen for several years in Iraq.

Further complicating security, thousands of Sunni protesters are also rallying in Anbar against Maliki, whose Shi’ite-led government they accuse of marginalizing their minority sect since the fall of Sunni strongman Saddam.