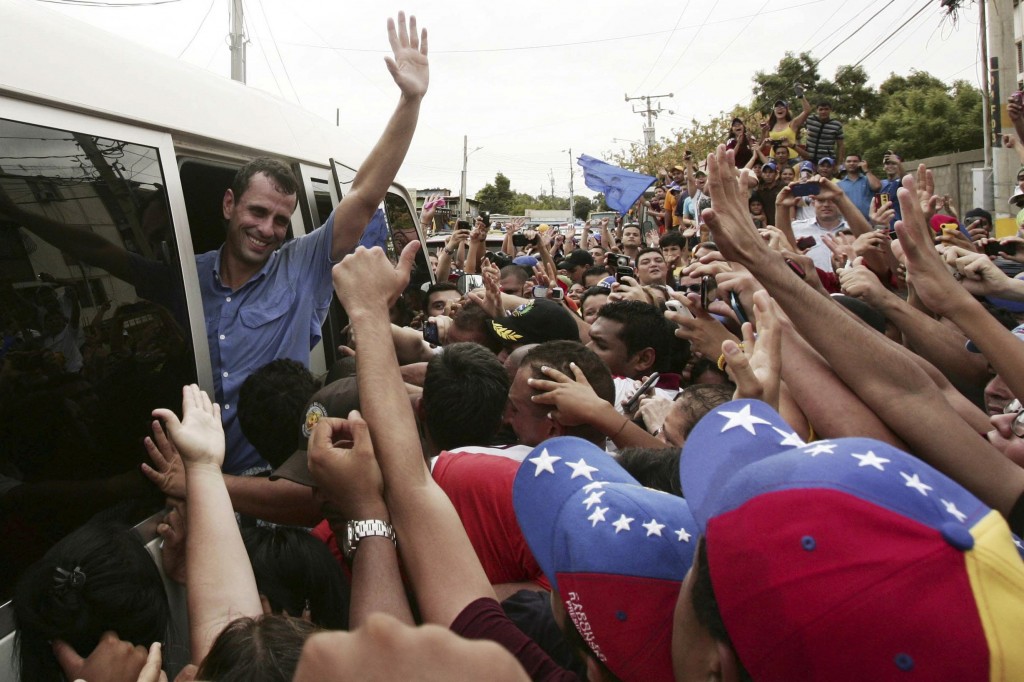 Capriles has berated Maduro as a weak imitation of the late Hugo Chavez, whose death two weeks ago convulsed the country and triggered the April 14 vote. The opposition also accuses the government of failing to fight crime and control inflation.

“The giveaways to other countries are going to end. Not another drop of oil will go toward financing the government of the Castros,” Capriles said, referring to Cuba’s present and past leaders, Raul and Fidel Castro.

“Nicolas is the candidate of Raul Castro; I’m the candidate
of the Venezuelan people,” Capriles said during a speech to university students in the oil-rich state of Zulia.

The election marks the first test of the “Chavismo” movement’s ability to maintain the late leader’s radical socialism after his death, and it will be crucial for regional allies that depend on Caracas for financing and cheap fuel.

A victory for Capriles, 40, would likely give global oil companies greater access to the world’s largest crude reserves and offer investors more market-friendly policies after years of state-centered economics.

Maduro, a 50-year-old former bus driver seen as having the advantage in the vote, has vowed to continue Chavez’s economic model that included frequent nationalizations and heavy regulation of private enterprise alongside generous social welfare programs that underpinned his popularity.

The youthful Capriles, who lost to Chavez by 11 percentage points in 2012, faces a delicate balancing act to highlight the flaws of Chavez’s governance without appearing to be attacking the former president or seeking to tarnish his legacy.

He has exchanged furious barbs with Maduro since launching his candidacy and renewed his criticisms from last year’s campaign over day-to-day problems such as unchecked crime, product shortages and high cost of living.