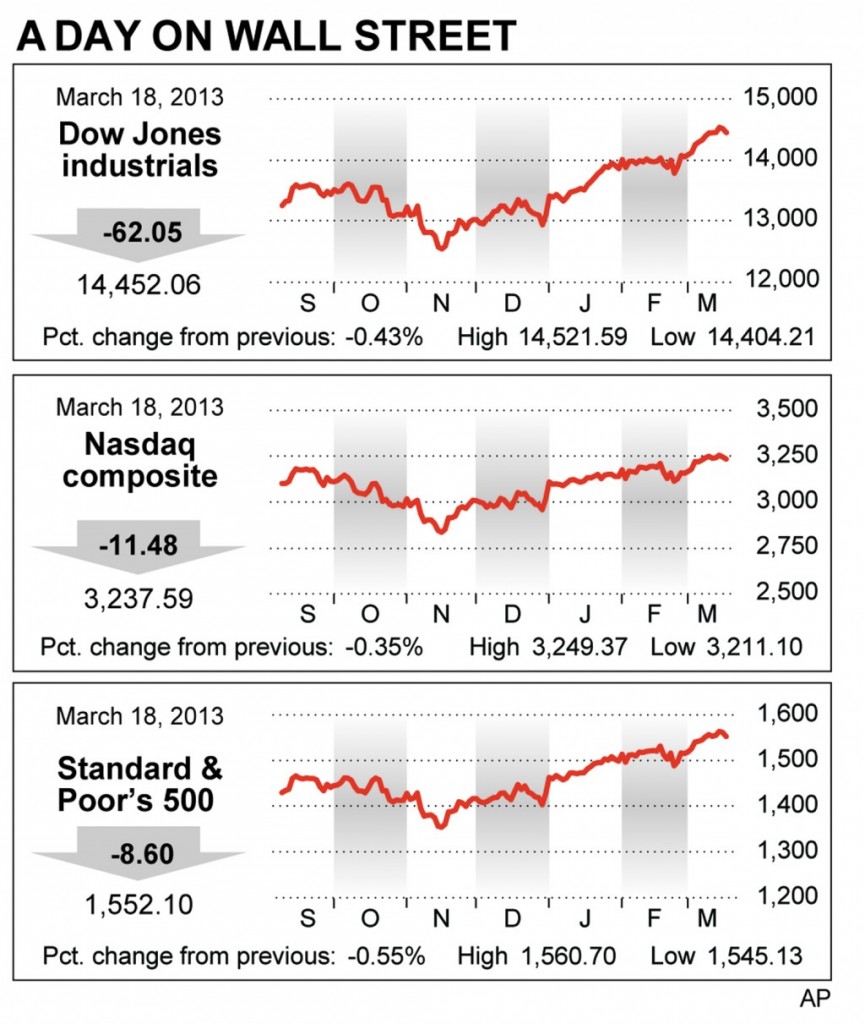 Stocks are closed lower on Wall Street as investors worried that a controversial proposal to seize money from depositors in Cyprus could set off another bout of anxiety over Europe’s shared currency.

The Dow Jones industrial average fell 62.05 points, or 0.4 percent, to 14,452.06 Monday. It had plunged as much as 110 points in the early going, briefly turned positive in the afternoon then fell back again in the last hour of trading.

European markets recovered most of an early slide and closed with modest losses. Yields on government bonds issued by Spain and Italy edged higher and the euro fell to a three-month low against the dollar.

The market rally that has pushed the Dow to record levels this year has been punctuated by concerns about the euro-region’s lingering debt crisis. The Dow fell 1.6 percent Feb. 25, its biggest wobble this year, after elections in Italy threw the country into political paralysis, endangering crucial economic reforms.

Markets in Europe and Asia also fell during early trading, before retracing some of their losses later in the day. Germany’s DAX index dropped 0.4 percent and Spain’s main stock index shed 1.3 percent. Indexes in Britain and France each lost 0.5 percent.

The Dow slumped more than 8 percent last year between May 1 and June 1 on concerns that Spain and Italy would be dragged into Europe’s debt crisis. While the Dow initially dropped last month in reaction to the Italian election results, it has since gained 4.6 percent. Likewise the market recovered much of the early loss Monday prompted by Cyprus’s bailout deal.

The yield on the 10-year U.S. Treasury bond, which moves inversely to its price, fell to 1.96 percent from 1.99 percent as investors moved money into low-risk investments. Yields on bonds issued by Spain and Italy, the two most vulnerable large European economies, rose but only slightly. Spain’s benchmark 10-year yield rose to 4.97 percent from 4.91 percent, and Italy’s rose to 4.57 percent from 4.55 percent.

Goldman Sachs said Monday that it had lifted its end-of-year target for the S&P 500 to 1,625 from its previous target of 1,575. The investment bank is forecasting that the U.S. economy will grow 2 percent this year and 2.9 percent next year. It also predicts that corporate deals and dividend payments will increase.

Deutsche Bank also said Monday it was lifting its year-end prediction for the S&P 500 to 1,625 from 1,600, forecasting an upturn in business spending.