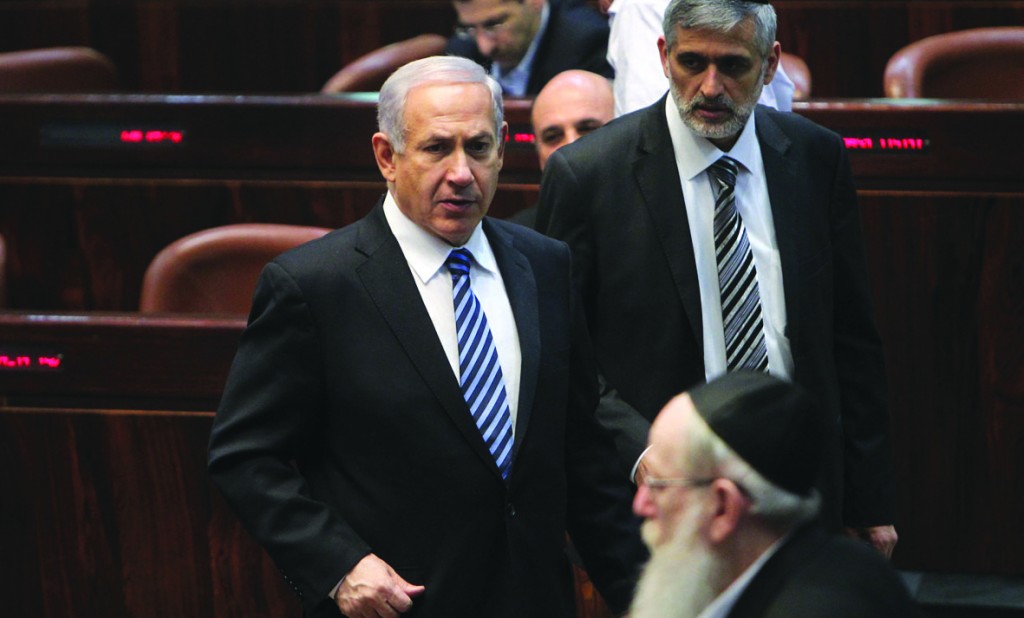 During the parliamentary vote prior to the installation of the new government, United Torah Judaism Knesset Member Yisrael Eichler called out: “Opposed to the evil government.”

Veteran Likud MK Reuven Rivlin, who was replaced as Knesset Speaker by Netanyahu,  left the plenum as the prime minister was sworn in.

Netanyahu’s address to the Knesset was interrupted when members of United Torah Judaism walked out when the prime minister read the names of Jewish Home Chairman Naftali Bennett and Jewish Home MKs Uri Ariel and Uri Orbach.

The UTJ members called out “a Jew doesn’t banish a Jew,” a clear reference to the pact between Bennet and Yesh Atid Leader Yair Lapid which insisted that the coalition not include any chareidim.

They returned when Netanyahu finished speaking.

UTJ MK Yaakov Litzman began his caustic address to the Knesset by declaring, “I want to thank you very much for giving me the opportunity to appear and speak here in the Knesset, even though I wear a kippah and have a beard. I am even wearing a hat and you haven’t banned me. But the day will come, based on the present government, that here [in the Knesset] I won’t be allowed to speak and vote…”

Litzman confidently stated that “we the chareidi public will continue to see the blossoming of the olam haTorah.”

He said that this is the first time since the state of Israel was established that the  government has declared “no to chareidi Jews, no to daas Yisrael, no to olam haTorah, no to bnei yeshivah, no to large families, no to shmiras mitzvos, no to halachah, no to Rabbanim Gedolei Yisrael. This is an embarrassment and humiliation.”

During his speech, MK Moshe Gafni symbolically tore apart a copy of the coalition agreement, declaring that “terrorist murderers are not harmed the way Bayit Yehudi and Yesh Atid want to harm Torah students.”

“I have never seen a coalition government in a democratic society in the Western world like this one, which takes an entire segment of a population, and seeks to harm it in a clause of the agreement.”

In his speech, Netanyahu, addressed the threat posed by Iranian and Syrian weapons falling into the hands of terrorists and said his administration “extends its hand in peace” to the Palestinians.

“With a Palestinian partner who is willing to conduct negotiations in good faith, Israel will be prepared for a historic compromise that will end the conflict with the Palestinians forever,” he said.

Labor leader Shelly Yacimovich, who is leading the largest party in the opposition spoke next and attacked the new government as a coalition of rich “capitalists” and one that excludes all marginal groups in society.