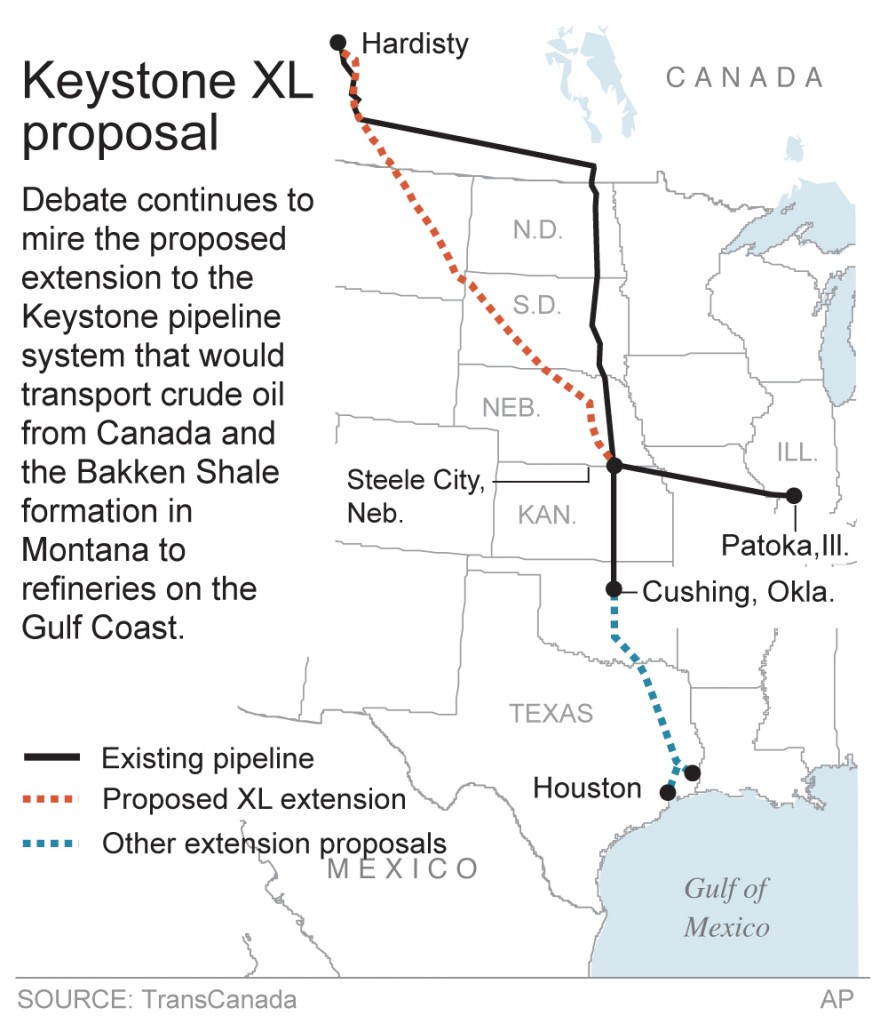 The Canadian energy industry insists it has no plans to reverse the flow of a pipeline that carries crude oil from Maine to Montreal, but that has done little to reassure New England towns that oppose the idea and the 18 members of Congress asking for a full environmental review.

Environmentalists in the U.S. and Canada started raising the alarm about oil they call “tar sands” or “oil sands” being moved through northern New England several months ago.

The Portland Montreal Pipe Line carries foreign crude oil from tankers docked in Portland, Maine, inland to eastern Canada, which imports most of its oil and has refineries there. But as the Canadian energy industry tries to figure out how to profit from new technology allowing them to exploit vast oil reserves in Alberta, it’s already looking at ways to ship it east — and, opponents fear, abroad through the Portland conduit.

Opponents claim moving the Alberta oil through the aging Portland-Montreal pipeline would be a threat because it is thicker and more corrosive than the regular crude it now carries, making it more likely to spill and cause an environmental disaster. The oil in question is the same kind that would flow through a controversial extension of the major Keystone pipeline in the central and western U.S.

“If they find any way at all to get oil sands oil to the eastern Canadian refineries, then I think somebody will argue, ‘Let’s reverse the Portland-Montreal pipeline because we don’t need (that) crude anymore,” said David Runnalls, an energy expert with the Centre for International Governance Innovation, a Canadian think tank. “This is all basically just being talked about. How much of this is serious, in the sense that anyone has invested 25 cents in it, is dubious.”

The CEO of the Maine company that owns the pipeline would welcome the opportunity to find new business uses for the 24-inch pipeline, built in the 1950’s, which runs through towns in Maine, New Hampshire and Vermont. He has made that pitch in media interviews in the United States and Canada, as well as last month to the Vermont Legislature, but hasn’t specifically proposed reversing the flow.

“We just do not have a project at this time,” said CEO Larry Wilson. “We’d consider any number of opportunities, we continue to do so, and I want people to comprehend one of the opportunities that we have considered and we’d be happy to consider going forward, is reversal from Montreal into South Portland.”

Raising suspicions of the plans — or lack thereof — is that Calgary-based Enbridge Pipelines, Inc. is seeking to reverse the flow of another pipeline from Ontario and Montreal, known as Line 9, to carry oil from western Canada to Quebec refineries.

Still, the company flatly denies having any designs on the Portland-Montreal line.

“We have no involvement with that company or that line, so it’s not really for me to speak on their behalf or to speculate in any way to what their plans are,” said Graham White, a spokesman for Enbridge. “The fact that we are reversing Line 9 to the Quebec refineries has no connection whatsoever to the PMPL line or moving any kind of product toward the U.S. coast or Portland.”

The kerfuffle in New England is a less-visible component over a larger discussion about how to ship western Canadian crude. The issue is also at play in the proposed Keystone XL pipeline, which would run through several Central and Western states and take the oil to U.S. refineries along the Gulf of Mexico.

Environmentalists complain the Keystone pipeline and others carrying the same Canadian crude not only are more susceptible to leaks and spills because of the nature of the oil, but also that when burned, the fuel contributes more greenhouse gas emissions than lighter crude.

The efforts to ship Canadian oil to Eastern refineries and reduce the nation’s reliance on imported oil become even sharper if the Keystone plan is rejected by President Barack Obama’s administration, Runnalls said.

There was a brief effort to reverse the Portland-Montreal pipeline in 2008, but it was abandoned during the economic downturn.

“If you connect the dots, there’s huge interest in moving oil out of Alberta, and where is it going to go?” said Sandra Levine, an attorney with the Vermont office of the Conservation Law Foundation, one of the groups fighting the possible reversal of the pipeline.

The issue has gotten the attention of the members of the U.S. House and Senate, all Democrats save one independent, from as far away as Arizona, who have asked Secretary of State John Kerry to require a comprehensive environmental impact statement should the Portland Pipeline Corp. seek to reverse the flow.

“The State Department has the responsibility to ensure transnational pipeline projects serve the national interest and prevent projects that will put our communities and the environment at risk of destructive spills,” said the Feb. 26 letter to Kerry.

In the Vermont town of Burke, just east of a pump station, Carol Krochak, who lives along a brook downstream from the pipeline, read an activist’s opinion piece at her town meeting that conveyed the worries of pipeline-reversal opponents.

“I am not a scientist. I cannot evaluate this,” said Krochak, who described herself as “very concerned” and wanted people to know of her fears. “It’s critical that people who have that expertise look at it.”

Burke didn’t vote against the project, but its planning commission asked the state to examine any reversal proposal through Vermont’s land-use planning process, which can take years.

The votes of concern led the Canadian consulate in Boston to send letters to 23 Vermont towns and to attend meetings in five Maine communities, saying Alberta oil posed no greater threat of a spill to the environment than traditional crude oil. The letter also stressed officials are unaware of any specific plan to move tar sands oil between Montreal and Portland.

Runnalls noted, though, that the Canadian oil industry had invested at least $50 billion in Alberta oil.

“They’re ramping up production like mad,” he said. “If they can’t find more ways to get this out of Alberta, to China or the U.S. or whatever, they’re in big trouble.”