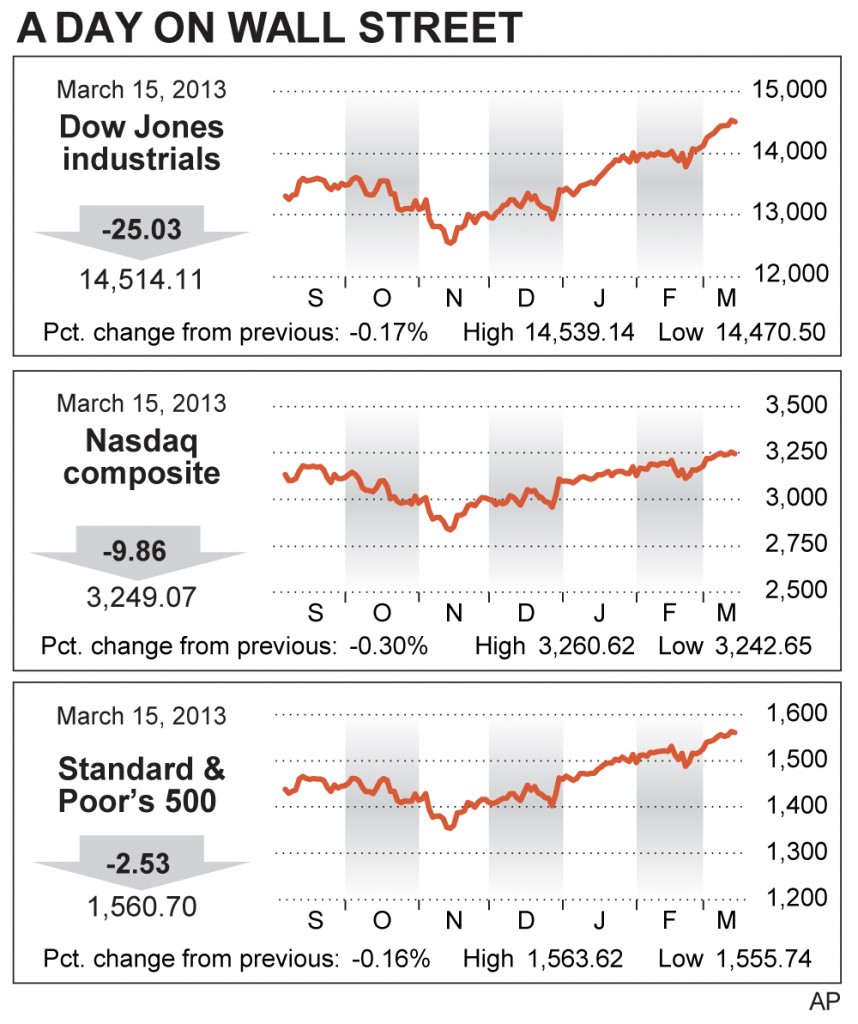 Trading Friday was tentative because investors feared that rising inflation could cause the Federal Reserve to retreat from policies aimed at boosting markets. The government said that consumer prices increased in February at the fastest pace in more than three years.

The increase was driven by a spike in gas prices; the core index, which excludes the volatile energy and food categories, increased more modestly. But both figures rose 2 percent compared with a year earlier, enough to get investors’ attention, said Peter Tchir, who runs the hedge fund TF Market Advisors. 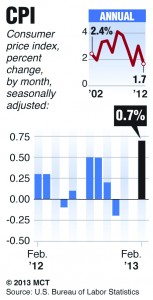 “It’s real and it’s a drag, and I think people are growing concerned that it can get out of control quickly,” Tchir said. He said signs of economic improvement and inflation “make them wonder if there will be continued market pressure on the Fed” to end its bond-buying programs.

The market’s recent rally to multiyear highs was fueled in part by the Fed’s efforts to keep interest rates low and encourage investment.

Stocks opened lower and extended their losses at 10 a.m. after a closely-watched index of consumer sentiment fell to its lowest level since the end of 2011. The University of Michigan’s preliminary consumer sentiment index dropped 5.8 points to 71.8, according JPMorgan analyst Daniel Silver said in a note to clients.

Stocks reversed the losses briefly at midday, then drifted back down in the afternoon.

Traders are processing big banks’ scores on “stress tests” administered by the Fed. The Fed said late Thursday that JPMorgan Chase and Goldman Sachs both need better plans to cope with a severe recession. It gave them until September to revise their plans.

Still, the Fed allowed both banks to increase their dividends and buy back their stock, signaling that regulators believe the banks are fundamentally sound.

The yield on the 10-year Treasury note fell to 1.99 percent from 2.06 percent early Thursday, as demand increased for ultra-safe investments.

Among the other companies making big moves: