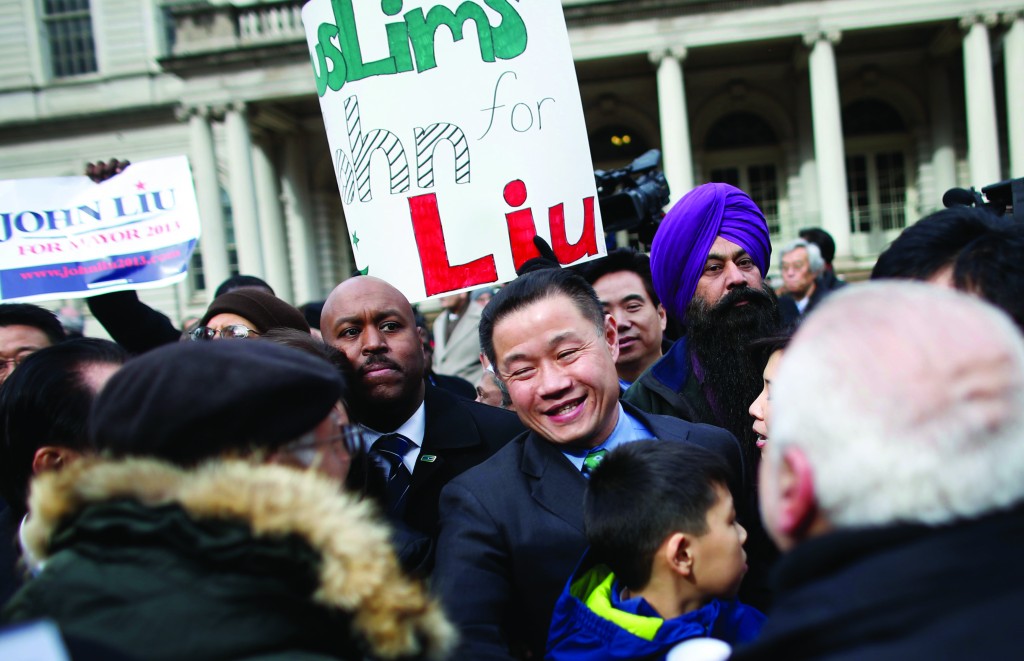 Surrounded by a diverse group of New Yorkers, including many Asians, New York City Comptroller John Liu on Sunday stood on the steps of City Hall as he embarked on his long- shot bid to become the first Asian-American mayor of the nation’s biggest city.

“I’ve got a lot of ideas now that I’ve served as city comptroller and been able to see every part of the city, every city agency and how it works. I got a lot of ideas,” Liu, a Democrat, said, according to Politicker.

“Because the promise of New York is still in the air and we’ve got to unleash that promise,” Liu added.

Liu (pronounced LOO) is already the first person of Asian descent to be elected citywide in New York. His mayoral ambitions illuminate the political rise of the city’s Asian-American population.

“I’ve lived here almost my whole life but I am an immigrant,” Liu said. “Born in Taiwan, my neck is still stamped ‘Made in Taiwan’ back here. But I had a chance like so many people to come to New York, and pursue the American dream and, in many ways, achieve it.”

But Liu’s rapid rise has been shadowed by a fundraising-conspiracy case against two former aides. They have pleaded not guilty and Liu hasn’t been charged with any wrongdoing.

Liu, who came to New York at age 5 from his native Taiwan, worked as an actuary before winning a Council seat in 2002 and the comptroller’s race in 2009.

His career is followed closely in the Chinese press, both in New York and China, who cater to a readership very proud of Liu’s political rise.

While Liu has been the last citywide official to declare for the mayoral race, his latest filing shows that he has not been idle.

“We’re just about there in maxing out at the spending limit,” a spokesperson told Politicker. “In fact, we’ve emphasized small amounts and from a broad base of NYC donors, the vast majority of whom are first-time donors to any campaign.”

Addressing a crowd that included a bus from his hometown of Queens and divisive Councilman Charles Barron, Liu contrasted the opportunity he had with other children growing up today.

“In New York these last 12 years, the rich keep getting filthy rich while far too many New Yorkers can’t even think to get ahead, because they’re just trying to get by,” Liu said. “The simple fact is, that a guy working on a Wall Street trading desk has a far greater shot of climbing into the one per cent, than a hard-working single mother has to climb above the poverty line.”

Liu has suggested raising the minimum wage to $11.50 an hour, far above what any other candidate is urging.

“There’s an old Chinese story — where a struggling town begs the emperor to send relief — and the emperor tells them to tighten their belts. The town replies: send belts,” he said. “Well the imperial edicts coming out of City Hall have been pretty much the same.”

Liu has raised $568,500 for which he is claiming a six-to-one cit matching grant, which entitles him to close to $3.5 million. Together with the $3,230,000 in private funds, he has the second- best filing behind frontrunner City Council Speaker Chris Quinn. That is less than $100,000 below the spending cap allowed prior to the Sept. 10 primary.

Public Advocate Bill de Blasio claimed about $5.9 million, also enough to place him on the path of maxing out. Bill Thompson, the fourth major Democrat running, has announced $2.8 million in private funding.