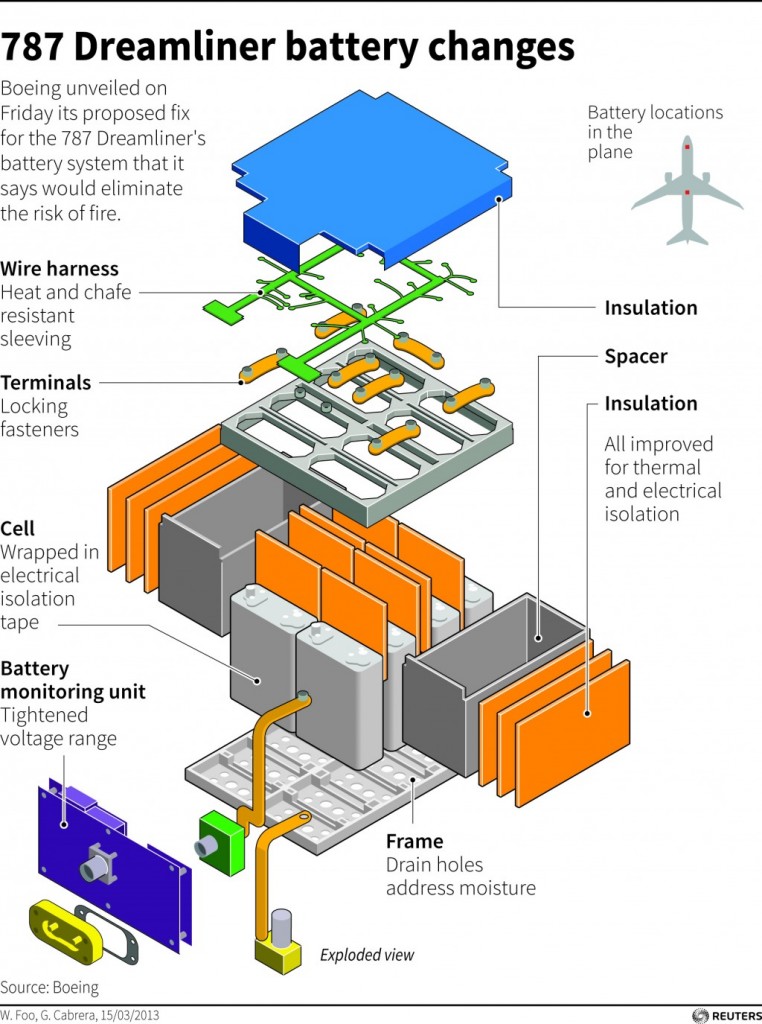 Two top Boeing Co. executives delivered an unflinching defense of the 787 Dreamliner in a Friday morning news conference in Japan, insisting that no battery fire will be possible on the airplane once the company’s proposed fix is installed.

Boeing Commercial Airplanes CEO Ray Conner, and Mike Sinnett, the vice president in charge of 787 systems, outlined the technical details of the solution in the homeland of the plane’s two biggest current operators.

Boeing expects to complete the testing demanded by the Federal Aviation Administration within weeks, not months, they said.

With most of the testing done in the lab, Boeing plans to fly only a single flight test.

The executives outlined multiple layers of protection designed to prevent battery cells from overheating, culminating in a final protection: a sealed steel enclosure that vents any gases directly out of the airplane.

That box “eliminates the possibility of fire,” Sinnett said.

The first layer of improvements is inside the GS Yuasa plant that manufactures the batteries in Japan. Boeing and GS Yuasa have tightened quality controls and added new tests on the batteries that come off the line.

A series of design changes have been made inside the battery, too. These include an electrical insulator wrapped around each of the eight battery cells to electrically isolate cells from each other and from the battery case, even in the event of one cell’s failure.

Electrical and thermal insulation installed above, below and between the cells will help keep the heat of the cells from affecting each other.

Wire sleeving and the wiring inside the battery will be upgraded to be more resistant to heat and chafing, and new self-locking fasteners will attach the metallic bars that connect the eight cells of the battery.

In addition, Boeing is adjusting the battery charger to narrow the acceptable level of charge for the battery. It will both lower the highest charge allowed and raise the lower level allowed for discharge.

The final level of protection is the steel box enclosing everything.

Combatively, he insisted that the media have misreported the purpose of Boeing’s battery-enclosure box by describing it as “containing a fire.”

“This enclosure keeps us from ever having a fire to begin with,” he said.

He said that the electrolyte inside the battery – a flammable liquid that releases oxygen if it burns – “does not release sufficient oxygen to materially contribute to combustion.”

The venting system, including a tube from the battery box to the outside of the plane, draws out the air and ensures that there isn’t enough oxygen, he said.

He said Boeing has been testing the box and venting system for six weeks. Heaters were placed on the side of an internal cell to induce a short circuit and then, when the cell vented hot electrolyte, Boeing used ignition devices to try to induce combustion.

“In no case were we able to ignite the electrolyte,” he said.

Boeing then pumped outside oxygen into the battery interior “with the sole intent of trying to create combustion,” and even then they were able to induce combustion that lasted only 200 milliseconds before going out.

“We’ve been able to demonstrate that no fire is possible,” Sinnett concluded.

Sinnett also quibbled with the use of the term “thermal runaway” – an uncontrolled battery overheating.

That’s something that occurred in the two events that prompted the grounding of the 787 fleet – the fire aboard a 787 on the ground in Boston and a battery smoldering in-flight in Japan – according to both investigating authorities: the National Transportation Safety Board and the Japan Transport Safety Board.

But Sinnett said the term has different uses according to different “perspectives” and that the only one that really matters to Boeing is at the “airplane level.”

At that level, he insisted, thermal runaway did not happen.

He said there was no fire on the Japanese flight. And in the case of the Boston fire, only some small flames were observed outside the box, “where there was oxygen,” but no fire inside the battery.

“In neither event was there a fire inside the blue box of the battery,” Sinnett said.