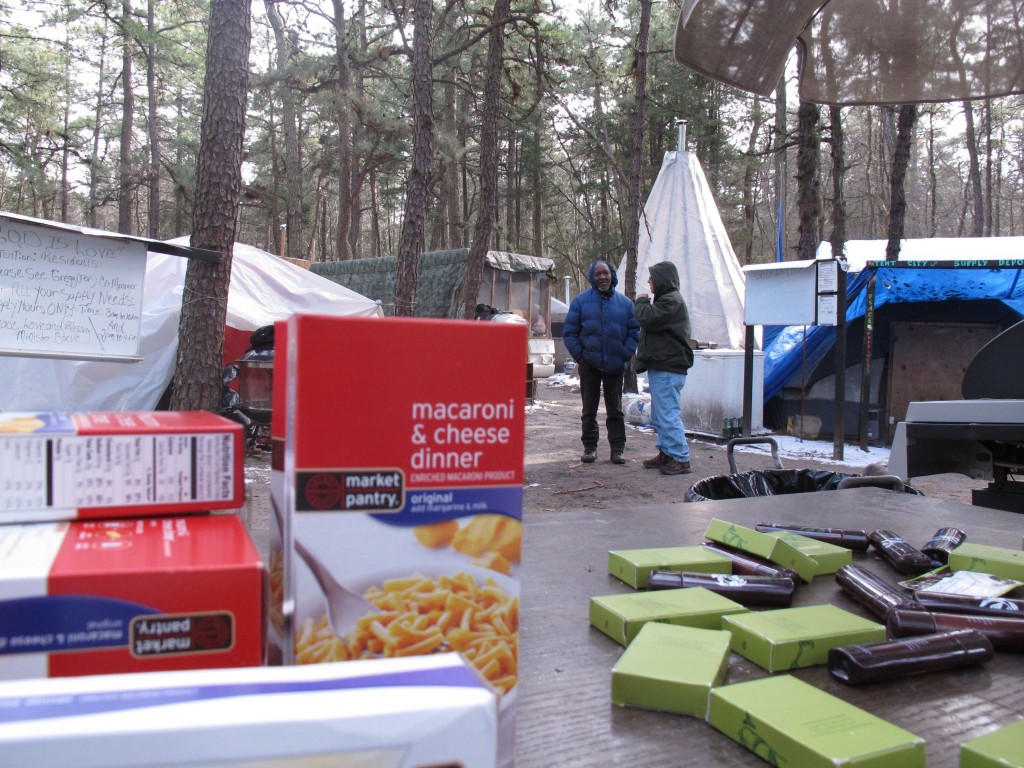 One is a nurse with three college degrees who says she was hit by a car and disabled. Another says he was born with brain damage and has bipolar disorder.

One was a bagger at a supermarket who says she was fired for absenteeism after taking care of her dying friend. One says he’s a homeless Navy veteran who needs a hernia operation, and another says he’s a homeless Marine veteran of Iraq who wants nothing more than to find a job.

Still another claims to have once been a millionaire but is now penniless.

They all say the same thing: that they want nothing more than to get out of the flimsy tents in the woods where they have been living and find some stable, safe housing. On Friday, the stories of 16 residents of Lakewood’s Tent City, written in their own words, will go before a judge who is being asked by the town to shut down the longtime encampment and evict its 80 or so residents.

“I would love to get out of Tent City,” wrote Beth Paterson, 56, who worked as a nurse at Lakehurst Naval Base and a nursing home before being hit by a car and disabled. “I have a 16-year-old son who lived with me before the accident, but I cannot currently afford an apartment where we could live. I had to send him to live with my parents — age 82 and 93 — and I miss him terribly. Why would I want to try and survive the winter living in the woods if I could be indoors with my son?”

Superior Court Judge Joseph Foster will hold a hearing Friday, the latest in the yearslong effort by Lakewood and Ocean County to shut down the camp. Advocates for the residents say that there is no shelter anywhere in the region for homeless adults and that the governments have not done enough to provide safe housing for them.

The issue has vexed the judge, who is wrestling with the many legal, moral and intensely personal issues the case has raised. Last year, he ruled the government has some responsibility to care for the poor, but the extent of that care, and how it is provided, remains to be determined.

The camp, now in its seventh winter, encompasses township-owned land. They live in plastic or fabric tents, some atop wooden platforms, many more on the muddy ground. Chickens wander about, squawking, and smoke from campfires and stoves curls into the air.

Barbecue grills in the center of the camp are used to cook meals, heavy on donated macaroni and cheese, beans and pasta. Church services are held in a tent or outdoors each night.

Earlier this year, Lakewood threatened daily fines of $1,000 for each of the site’s 100 tents and 80 wood burning stoves. They cited health and sanitary issues at the site, as well as
complaints from nearby residents. Lakewood’s mayor called conditions there “disgusting” and “horrendous.”

But the camp cannot be closed without the judge’s permission because of the ongoing litigation.

The stories of the homeless residents are part of legal filings by Jeffrey Wild, a lawyer representing the Tent City occupants for free. In addition to seeking to move the judge by showing how illness, an accident, the loss of a job or just plain bad luck can leave the most successful people without a home, the stories also seem designed to counter criticism from some officials and neighbors that the Tent City residents are lazy and want to stay in the woods indefinitely.

“Everyone agrees that there should not have to be tent cities, and that Tent City should cease to exist as soon as all of [its] residents have access to safe and adequate indoor shelter, so they no longer need to live outside in the woods,” Wild wrote to the judge.

Lakewood wants the judge, among other things, to order a “census” of camp residents, force them to apply for county assistance, ban any new arrivals and order that the site be turned over to Lakewood at an unspecified future date.

The claims of the homeless residents could not be independently verified, but each one signed a legal document asserting their statements to the judge are true and acknowledging they can be punished if they prove false.