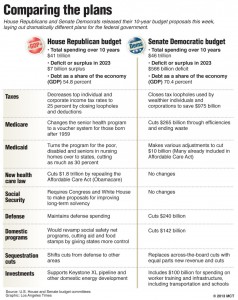 President Barack Obama and Republican senators on Thursday discussed working on a stand-alone corporate tax reform bill rather than the more comprehensive approach to updating the U.S. tax code that has been the goal of both political parties.

Freshman Senator Jeff Flake of Arizona said the idea was raised by fellow Republican Senator Patrick Toomey of Pennsylvania and that Obama was open to the idea, although no decisions were made during their meeting in the U.S. Capitol.

Obama, according to senators, said he would support a revenue-neutral corporate tax reform effort — a message the president also delivered to House of Representatives Republicans on Wednesday.

“If he’s agreed, and he has, that the lowering of rates with the corporate tax will be revenue-neutral, there’s no reason we can’t do that now,” said Flake.

Obama met with Republican senators as part of a nearly two-week-long outreach to lawmakers that the president hopes will improve chances of a broad deficit-reduction deal.

The endless budget standoffs in Washington have highlighted stark differences over how and to what extent individuals should be taxed, with Democrats backing higher tax rates for the wealthy.

Obama and Republicans are closer together on the need to revamp corporate taxes, with both sides backing a lower top rate. The current statutory rate of 35 percent is the steepest in the industrialized world, although some companies pay far less and others pay more.

The White House proposed a “framework” for corporate tax reform last year that called for trimming the rate to 28 percent. Republicans generally want to pare it to 25 percent.

A key sticking point is that many businesses are set up as entities that do not pay a corporate rate. In these so-called pass-through organizations, such as law firms and hedge funds, individual owners pay the individual tax rate, now topping out near 40 percent.

“On the corporate side, it sounded like we’re in agreement,” McConnell said Thursday.

This article appeared in print on page 3 of the March 15th, 2013 edition of Hamodia.