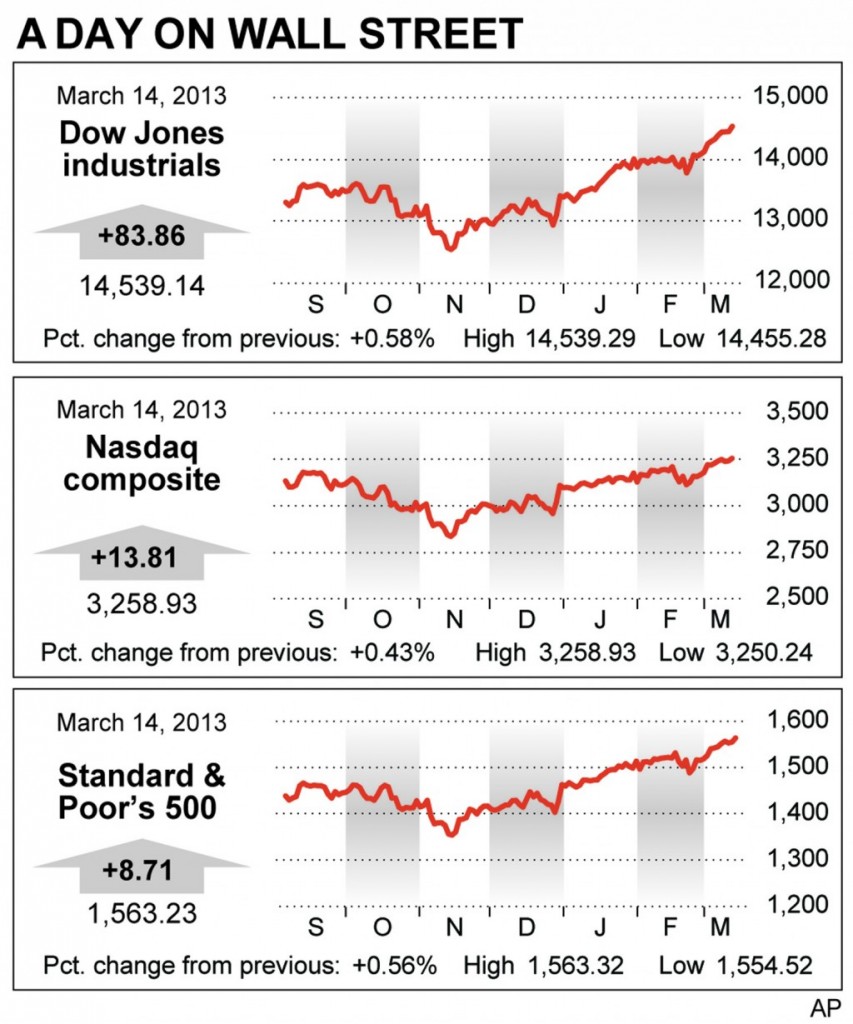 The Dow Jones industrial average has reached another milestone, recording its longest winning streak since 1996.

The last time the Dow knocked out 10 straight days of gains was November 1996. Back then, internet companies were still lining up to go public and President Bill Clinton had just won another term in the White House.

“It’s just a good run,” said Dan Greenhaus, chief global strategist at the brokerage BTIG. “And it speaks to optimism about the future.”

Encouraging news on jobs gave the market an early lift. The Standard & Poor’s 500 index closed within two points of its all-time high reached in October 2007.

Signs that the economic recovery is gaining strength have propelled the market higher since the beginning of March.

Record corporate profits and reassurances from Federal Reserve officials that they plan to keep interests rates at historically low levels have also helped push stocks higher. U.S. retail spending increased in February at the fastest pace in five months. That came despite higher payroll taxes kicking in at the beginning of the year.

MGM Resorts International’s stock gained 7 percent after its biggest shareholder, the financier Kirk Kerkorian, requested permission to raise his stake in MGM to a quarter of its shares. MGM owns the Bellagio, Mandalay Bay and other casinos on the Las Vegas Strip.

Analysts say the stock market’s surge this year will likely convince more people to move cash into stocks. The Dow is up 11 percent this year, the S&P 500 is up 9.6 percent.

“When the markets are running you just want to be part of it,” Cote said. “Sitting on the sidelines is the wrong move.”

So far, retail investors appear unsure. They put money in U.S. stock funds to start the year, but have withdrawn it for the last two weeks, according to a report out Wednesday from the Investment Company Institute.

The rally may have pushed the Dow to record highs, but skeptics caution that markets regularly take sudden turns. Exactly one year ago, for instance, the Dow had already raced up 8 percent. But by June, all those gains were gone.

Another note of caution: Former Federal Reserve Chairman Alan Greenspan made his famous “irrational exuberance” comment less than a month after the Dow’s 10-day streak in November 1996.

In the Treasury market, the yield on the 10-year note edged up to 2.03 percent from 2.02 percent late Wednesday.