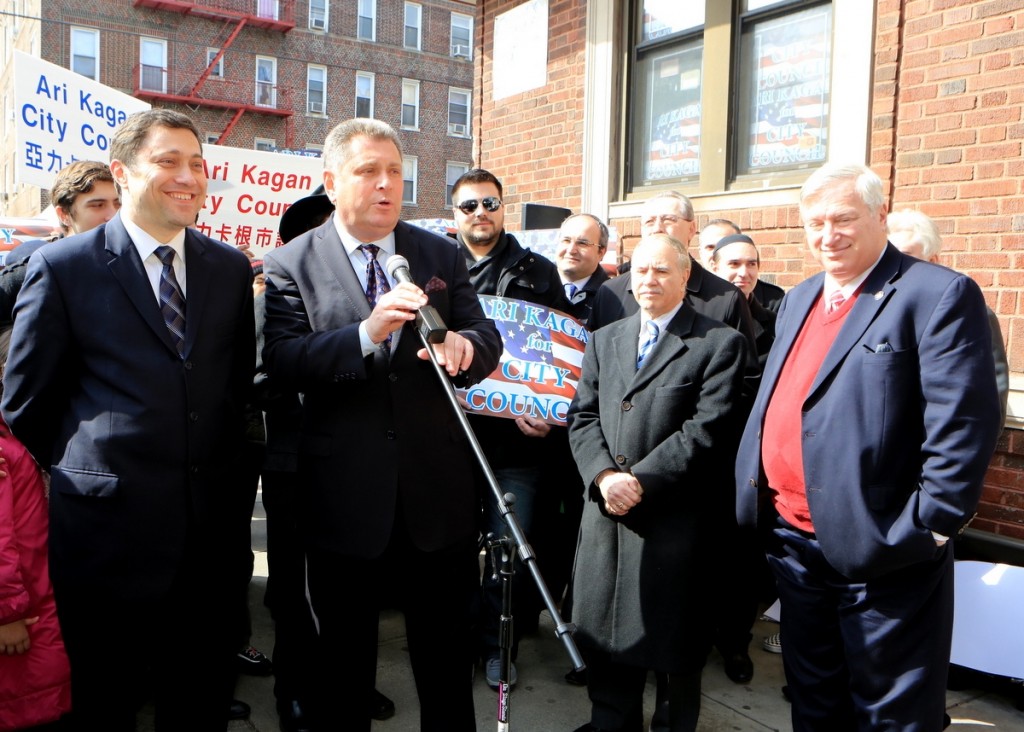 District leader Ari Kagan on Sunday kicked off his campaign
to replace term-limited Councilman Michael Nelson in Flatbush at a colorful event.

The attendance of an array of Russian-born New York elected officials highlighted Kagan’s desire to become the first Russian émigré to represent the district in the council.

“I’m running for City Council to serve,” Kagan said, “and because in a city that has become increasingly unaffordable for working families and young people and seniors, we need a voice in City Hall. … Government is a force for good, but it can do a better job.”

The district, which includes Midwood, Sheepshead Bay, Manhattan Beach and Brighton Beach, was recently the subject of a bitter under-the-radar battle between the Orthodox and Russian communities over which group would be the majority when the new redistricting map is released.

It was understood that if the Orthodox population would be boosted, then Chaim Deutch, the head of the Flatbush Shomrim and a Nelson aide would run; if Russian residents would be the majority then Kagan would run.

The district borders were finalized last week, adding thousands of Russian families to the district and giving Kagan his stage. He announced his launch days after the districting commission said they would be sending the map to the Justice Department for final approval.

Kagan, a journalist in an ethnic Russian-language newspaper, is Jewish and a member of the Manhattan Beach Jewish Center. He promised to work to lower the tuition burden on yeshivah parents without touching the public school budget, suggesting school tax credits as an example.

But the day was not without excitement. The Sheepshead Bites reported that a local activist grabbed the microphone before Kagan started talking, and harangued Kagan for 10 minutes about his former career as a journalist in Soviet-era Russia.

Some of Kagan’s supporters who grew up in the Soviet Union noted that taking a job within the Communist Party was a means of survival in the old country.

Former Gov. George Pataki on Wednesday endorsed John Catsimatidis’s mayoral campaign, adding to a list of successes the Greek immigrant had in recent days at snapping up the GOP nod for New York City mayor.

“John Catsimatidis has the skills, the vision, and the courage needed to lead New York City,” Pataki, a former three-term Republican governor, said.

“John’s life story is the embodiment of the American dream,” he added. “It has given him the commonsense and practical business experience needed to run a city as complex as New York.”

The Republican party chairmen of Brooklyn, Manhattan, Queens and the Bronx are ready to endorse the billionaire supermarket mogul, defying the inevitability former Giuliani aide Joseph Lhota has tried to project for himself.

Craig Eaton of Brooklyn and Jay Savino of the Bronx are abandoning their support for Adolfo Carrion, Jr., a former Bronx borough president who is running on the Independence Party line, to join Manhattan Chairman Dan Isaacs and Phil Ragusa of Queens in backing Catsimatidis.

Robert Scamardella, the Republican chairman of Staten Island, the most conservative of New York City’s five boroughs, has said he would probably endorse Lhota, but he resigned suddenly last month.

Lhota said that he was confident he will still win Staten Island’s vote. “I am very comfortable in my position with the leadership on Staten Island,” he said.

Eaton said that Catsimatidis’s assets included allowing him “the financial wherewithal to self-fund the race for mayor” and “crossover appeal with Democrats and independents due to his various political and business relationships.”

According to his filing last week, Catsimatidis has already spent about $250,000 of his own money — which is estimated by Forbes at more than $3 billion. He has previously said that his “mental budget” includes spending at least $1 million a month.

“When an insurance company hires you to sell life insurance, you sell it to your families, your parents, and then what do you do next month?” he said, arguing that Lhota has burned his donors.

Squadron said on Wednesday that he has more than $2 million in campaign contributions and expected public matching funds, and James announced the backing of an influential labor union.

“For years, Tish James has demonstrated a deep commitment to the working people of our city,” said Hector Figueroa, president of the 32BJ/SEIU union.

Other candidates in the Democratic primary include Cathy Guerriero, a professor and consultant, and Reshma Saujani, a former de Blasio deputy.

The post of public advocate is often mocked in the media, and there have been calls in the past to abolish the institution charged with being the “people’s advocate in city government,” since it duplicates the job the city council is supposed to be doing.

Assemblyman Vito Lopez has been absent from Albany since announcing several weeks ago that he is suffering from pneumonia. But now, the scandal-ridden politician’s name plate on the wall outside his Albany office is also gone, the Daily News reported.

“It fell off or disappeared a few weeks ago and I ordered a new one,” a Lopez aide said.

The Brooklyn Democratic powerhouse has long enjoyed an expansive suite, until earlier this year when he was downgraded.

An email that appeared to come from Quinn, the frontrunner, linked to a website that looked exactly like her own campaign site. But the messages were clearly intended to embarrass her.

“I stand with Mayor Michael Bloomberg in opposing paid sick days for New Yorkers,” the message read. “For basic democracy and human rights, the voices of millions of everyday New Yorkers must be heard. It’s time for an up-or-down vote on paid sick days — Christine Quinn.”

Quinn said that her position was unchanged and called the spoof “unfortunate.” But Bill de Blasio seized on the prank.

“Consider us had,” Dan Levitan, a de Blasio campaign spokesman, said. “We thought after three long years of blocking paid sick days, the million New Yorkers who need them were finally going to get a break. Whoever is behind this may have an odd sense of humor, but they do have better judgment for what’s right for New Yorkers than Speaker Quinn.”

The creator of the spoof site is unknown — it was registered last month by a Panamanian company who refused to reveal who was behind it — but it generated plenty of mainstream press.

Meanwhile, thirty council members, a majority of the 51-member body, have joined an effort by good-government group Common Cause slamming Quinn for blocking the vote.

Councilman Mark Weprin (D-Queens) appears to be the frontrunner to be the next speaker, when Christine Quinn steps down at the end of the year, Colin Campbell of Politicker reported.

Weprin’s political committee doled out $1,000 in campaign contributions to seven council candidates, all of whom are favorites to win their races. The speaker is elected by a majority of council members in their first act of business in January 2014.

They are the most obese state in the nation, but the Mississippi legislature voted overwhelmingly Tuesday to approve what they call the “anti-Bloomberg bill.”

The bill, which Gov. Phil Bryant, a Republican, is expected to sign into law, would ban local municipalities from requiring restaurants to post calorie counts on menus or limit portion sizes.

The bill was passed the same day that a state judge overturned Bloomberg’s ban on large sodas.

“You know, [comedy shows] couldn’t write this stuff,” Bloomberg said. “How can somebody try and pass a law that deliberately says we can’t improve the lives of our citizens? It’s just farce. Nobody would believe it if you wrote it in a book.”

Greenfield Gets Conservative Backing for Reelection

Nobody is running against Councilman David Greenfield, who represents Boro Park, Flatbush and Bensonhurst, but he is taking no chances. The man who describes himself as a “conservative Democrat” is on the Democratic line, and now he has the Conservative line as well.

City Comptroller John Liu will announce on Sunday his run for New York City mayor, the last of the major Democratic candidates to officially throw his hat in the ring, Politicker reported.

Liu has been attending forums and debates, but a lingering federal campaign finance probe from his 2009 run for comptroller has hung over his candidacy.

Ex-Senator Gets Prison Reprieve Over Toothache

“Dr. Shapiro opines that this treatment is necessary and must be done ‘expeditiously’ in order to avoid additional damage,” he wrote. “It is very unlikely that this type of work would occur while Mr. Monserrate is in custody.”

Judge Colleen McMahon gave the former senator until April 11 to report to prison.

The Flatbush Democrat said that a report in Gatemouth, a local blog, calling on him to apologize for offending the Jewish community for supporting the Nation of Islam was baseless.

“In order for me to apologize for something, I would have to have said something anti the Jewish community or anti-Semitic,” Adams told Jacob Kornbluh of NYCElects-2013.

Adams said Gatemouth took quotes from Nation founder Louis Farrakhan and made it appear as if he supported him.

Adams said that he has “always been supportive of Israel and the Jewish community.”

The chief prosecutors of the boroughs of Manhattan and the Bronx were both ticketed for parking or driving illegally one day apart this week, the Daily News reported.

Traffic agents ticketed a vehicle used by Manhattan District Attorney Cy Vance after a member of his security detail illegally parked the SUV. The summons was placed on the windshield of the city-issued van, which was empty at the time. Vance was at a budget hearing.

That came one day after Bronx District Attorney Robert Johnson was issued a ticket for making an “improper turn” at an intersection.

“He received a ticket and immediately paid it,” Steven Reed, a spokesman for Johnson, said. “The check’s already in the mail.”