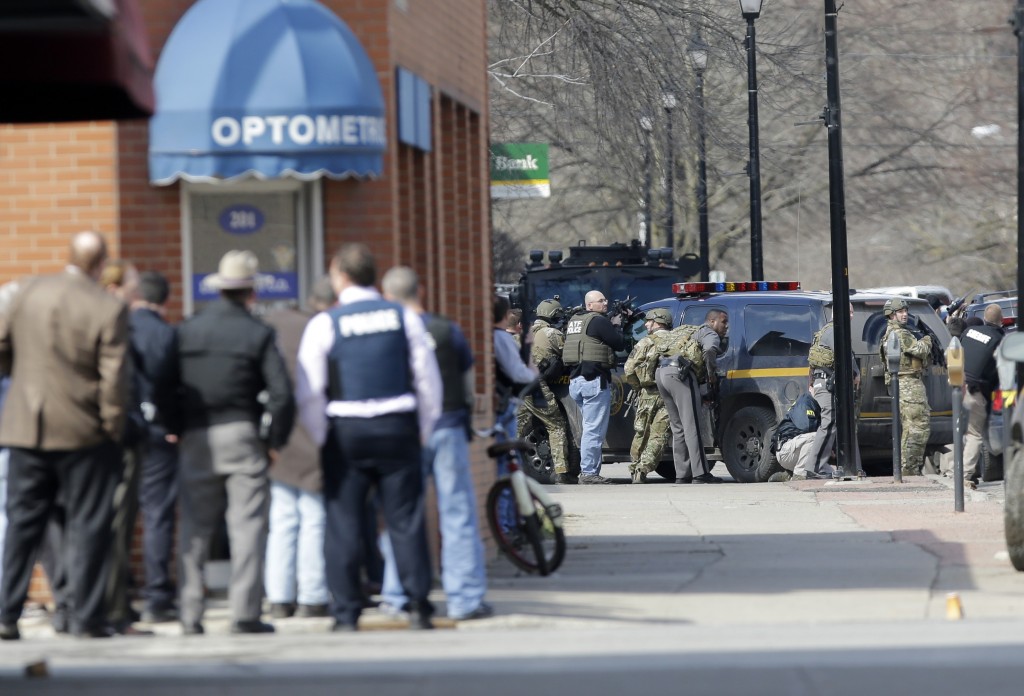 A man suspected of killing four people and wounding two others at two local businesses was believed to be holed up in an abandoned building surrounded by SWAT teams in an upstate village on Wednesday evening, state police said.

“We’re in no rush to bring this to a conclusion,” D’Amico said, adding that the main objective was to make sure no one else was hurt.

Police said Myers’ rampage started with a fire in his apartment in the nearby village of Mohawk at about 9:30 a.m. Wednesday. D’Amico said Myers then drove to John’s Barber Shop around the corner and used a shotgun shot to kill two customers, whom he identified as Harry Montgomery, 68, and Michael Rancier, 57. The shop’s owner, John Seymour, and another customer, Dan Haslauer, were listed in critical condition at a Utica hospital.

D’Amico said the gunman then drove to Gaffy’s Fast Lube in nearby Herkimer and used the shotgun to kill Thomas Stefka, an employee, and Michael Renshaw, a customer who was a 20-year veteran of the state Department of Corrections.

Gov. Andrew Cuomo, in a press conference in Herkimer, called it “truly an inexplicable situation.”

“There’s no apparent motive to the best of our knowledge at this time to provoke these attacks,” he said.

Myers’ only known police record was a 1973 drunken driving arrest.

Police positioned in front of Glory Days Food and Spirits in the village of Herkimer, named for the German immigrant family that settled in the western Mohawk Valley in the 1720s, were looking for Myers on Wednesday afternoon. Myles Smith, who lives in one of the apartments above the shops, said by cellphone he had heard police trying to talk to Myers.

“The snipers on the roof are sitting there,” Smith said. “I ain’t seen a whole lot of movement. I heard about five gunshots. I keep hearing them trying to talk him out, but I don’t think he’s coming out.”

Michele Mlinar, who works at Cangee’s Bar and Grille in Herkimer, said Myers frequently went in and had a bottle or two of beer and left without speaking to anyone. She said he was always alone and she didn’t even know his name until police released his mug shot on Wednesday.

Guns and ammunition were found inside an apartment at Myers’ building, but it was unclear whether they were from his apartment.

The two villages are about 65 miles east of Syracuse, on opposite sides of the Mohawk River in a region known as the Mohawk Valley.

James Baron, the mayor of Mohawk, said he doesn’t know Myers but knew several of the people who were shot, including at least two of the barbershop victims. The mayor described his village as close-knit and friendly, “the kind of place where you’d say, ‘Oh, it would never happen here.’“

Herkimer County Community College lifted a lockdown during the afternoon, and all but a few schools near the scene also were releasing students. D’Amico said most of
the three-block neighborhood around the search scene was evacuated.

Amanda Viscomi, Herkimer’s acting clerk-treasurer for the village of 7,700, said the shooting at Gaffey’s happened a few blocks from village hall. She said she was told the shooter was at large and that state police, sheriff’s deputies and other police were swarming the area.

“Everybody’s on lockdown, all the schools, the college, the village,” Viscomi said. “It’s very, very scary.”