Dow Notches Ninth Gain in a Row, Longest Since ’96 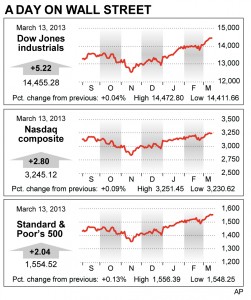 The Dow Jones industrial average notched its ninth gain in a row, giving the index its longest winning streak in more than sixteen years.

Demand for stocks has been propelled this year by optimism that the housing market is recovering and that companies have started to hire. Strong company earnings and ongoing stimulus from the Federal Reserve are also helping make stocks more attractive.

The Dow’s last nine-day winning streak was logged in May 1996. In November of the same year, in the early days of the technology boom, it gained for 10 straight days.

Stocks overcame an early loss Wednesday, having edged lower at the start of the trading day despite an unexpectedly strong increase in U.S. consumer spending last month.

Americans spent at the fastest pace in five months in February, boosting retail spending 1.1 percent compared with January, the Commerce Department reported Wednesday. Economists had forecast a rise of just 0.2 percent, according to data provider FactSet.

The failure of the market to rally directly after the report suggests that the bar has now risen for investors as stocks have rallied.

“As the market rises, so do expectations,” said Bill Stone, chief investment strategist at PNC Wealth Management. “So, even if you get good numbers you don’t necessarily get the market to go up.” 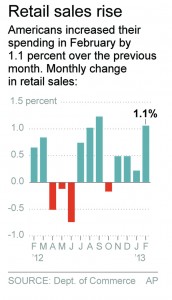 The solid increase in retail sales is encouraging for the economy because it shows that Americans kept spending despite a payroll tax increase that has lowered take-home pay this year for most workers. Consumer spending drives about 70 percent of the U.S. economy.

Brian Gendreau, a strategist at Cetera Financial Group, says that even if markets dip in coming weeks, the trend of rising company earnings is likely to push stocks higher in the longer term. So far companies have reported 7.7 percent earnings growth for the fourth quarter, the third straight quarter of gains, according to S&P Capital IQ.

“Earnings growth has been quite strong. Corporations have found a way to make money,” said Gendreau. “New products, new markets, cost savings. I don’t believe that is going to stop any time soon.”

Stocks in Europe were mixed. Most markets edged lower after industrial production in the countries using the euro unexpectedly fell by 0.4 percent in January. Economists had expected it to rise by 0.1 percent, according to FactSet.

The yield on the 10-year Treasury note was unchanged from late Tuesday at 2.02 percent.

This article appeared in print on page 8 of the March 14th, 2013 edition of Hamodia.