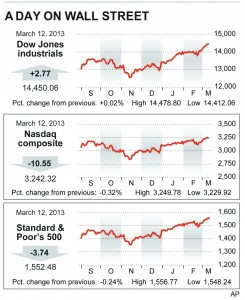 A tiny gain gave the Dow its eighth straight increase Tuesday, long enough to match its longest series of gains since February 2011.

Stocks have surged this year as investors became encouraged by a recovery in the housing market and a pickup in hiring. Strong corporate earnings and continuing economic stimulus from the Federal Reserve are also supporting demand for stocks.

The last significant downturn for stocks started before the Presidential elections in November, when the Dow fell 8 percent between Oct. 5 and Nov. 15 on concern that a divided government wouldn’t be able to reach a budget deal to stop the U.S. going over the “fiscal cliff” of sweeping tax hikes and deep spending cuts.

Stocks haven’t had a correction, typically defined as a decline of between 10 and 20 percent, since November 2011. That sell-off came after talks on cutting the U.S. deficit broke down in Washington.

Merck was the biggest gainer in the Dow, advancing $1.38, or 3.2 percent, to $45.04 after the drugmaker said a data safety monitoring board recommended that a study of its cholesterol drug Vytorin should continue.

Markets were mixed in Europe. Italy easily sold (EURO)7.75 billion ($10 billion) in 12-month bonds, though at slightly higher interest rates. It was the first test of market sentiment since Fitch downgraded the country’s credit rating on Friday due to political uncertainty there.

The Dow’s biggest wobble this year came on Feb. 25, when it lost 1.6 percent after inconclusive results from Italian elections pushed the country toward political gridlock, threatening its ability to follow through on unpopular budget cuts demanded by its European neighbors. That gave investors a flashback to last spring, when a flare-up in Europe’s debt crisis sent markets spiraling lower in the U.S. and Europe.

The yield on the 10-year Treasury note, which moves inversely to its price, fell to 2.02 percent from 2.06 percent.

– Yum Brands Inc. rose 89 cents, or 1.3 percent, to $68.73 after the owner of KFC, Pizza Hut and Taco Bell announced a smaller-than-expected drop in its sales in China for the months of January and February following a food scare over its chicken suppliers.

– Diamond Foods slumped $1.71, or 9.7 percent, to $15.89 after the snack maker reported disappointing second-quarter sales and offered an estimate for the rest of the fiscal year that also fell short of Wall Street estimates.

– VeriFone Systems gained $1.22, or 6 percent, to $21.68 after the company, a leading maker of terminals for electronic payments, said late Monday that its CEO is stepping down after recent stumbles cut the company’s stock price nearly in half.

– Costco rose $1.31 to $103.75 after reporting that its fiscal second-quarter net income climbed 39 percent. The discount retailer pulled in more money from membership fees, its sales improved and it also recorded a large tax benefit. Even without the tax benefit the results were better than analysts had expected.

– Cabela’s soared $6.75, or 12.5 percent, to $60.65 after the fishing, hunting and outdoors retailer said that it expects first-quarter profit will come in above market expectations.

This article appeared in print on page D50 of the March 13th, 2013 edition of Hamodia.