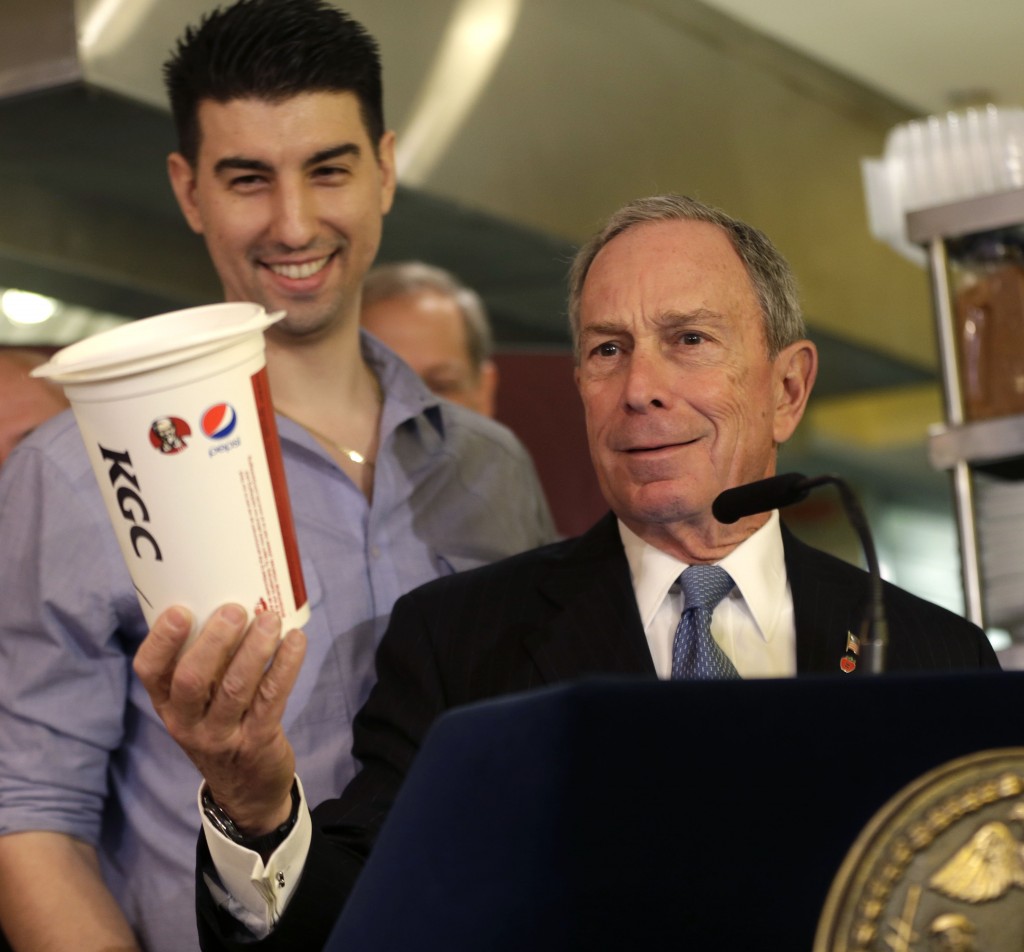 Eateries from corner delis to concession stands have gotten a last-minute reprieve from the nation’s first ban on big sugary drinks. But Mayor Michael Bloomberg is urging them to shrink their cups and bottles anyway.

After a judge struck down the 16-ounce size limit for sodas and some other sweet drinks as arbitrary and outside city health regulators’ purview, Bloomberg defended it Tuesday as a groundbreaking anti-obesity effort that would prevail on appeal and is already beginning to change attitudes and actual practices.

“Despite yesterday’s temporary setback, I don’t think there’s any doubt that momentum is moving in our direction,” Bloomberg said during a visit to a Manhattan diner that is now voluntarily complying with the policy, ditching 20-ounce bottles of soda and reserving 24-ounce to-go cups for iced coffee.

“We are confident that we will win that [appeal], but while the legal case plays out, the conversation we started about the dangers of the portion sizes of sugary drinks has prompted many people … to take action,” he said.

A few hours later, the city filed formal notice of its plan to appeal. The American Beverage Association and other business groups that sued the city said they felt the judge’s decision was strong and were “confident in the ruling.”

The city’s response was a sign of how aggressively Bloomberg, an independent who was previously a Democrat and a Republican, sees the city’s role in pushing New Yorkers to improve their health habits and nudging other cities to do likewise. But it remains to be seen whether the city that was first to compel chain restaurants to post calorie counts and bar artificial trans fats in restaurant food will ultimately prevail in capping soda portions.

Bloomberg defended the ban Monday night, but he also joked about his own “addiction.”

“As long as you don’t ban Cheez-Its,” he said. “Cheez-Its are okay. That’s my addiction.”

Several of the people seeing to replace Bloomberg had mixed responses to the judge’s ruling.

“Today’s decision is a disappointing one and I hope the City succeeds on appeal,” the city’s public advocate, Bill de Blasio, said in a statement.

“Today’s ruling unmasks Mayor Bloomberg’s misguided soda ban policy for what it is: a cosmetic solution to a complex problem,” former city comptroller Bill Thompson said. “To solve the serious health challenge of our city, we need leadership, not gimmicks.”

Council Speaker Christine Quinn, on CNN’s “Piers Morgan Live,” laughed when Morgan asked her if the soda industry contributions to her campaign “clouded your judgment on soda-gate.”

“The soda ban isn’t one of his proposals in this area that I support,” Quinn, the campaign frontrunner, said. “Because my fear is with issues around food and obesity, if you say no, people have almost a reflex reaction to do it, to go get it.”

Reactions from city residents were mostly agreeable with the ban’s overturn, reflecting the poll showing that New Yorkers did not like Bloomberg’s “nanny” series of health measures.

Jose Perez, a special education teacher, said Monday as he got a can of soda and a hot dog from a street vendor, “Really, I think it’s just big government getting in the way of people’s rights.

“I think it’s up to the person,” he said. “If they want to have a giant soda, that’s their business.”

State Supreme Court Justice Milton Tingling said the restriction was arbitrary because it applies to only some sugary beverages and some places that sell them. It doesn’t cover alcoholic drinks or many lattes and other milk-based concoctions. Nor does it apply at supermarkets or many convenience stores — including 7-Eleven, home of the Big Gulp.

“The loopholes in this rule effectively defeat the stated purpose,” Tingling wrote.

Tingling, a Democrat elected to the trial court bench in 2001, said the Bloomberg-appointed Board of Health intruded on the elected City Council’s authority when it imposed the rule.

The appeal likely will turn on whether a higher court “feels that the mayor has gone too far in ruling by decree in bypassing City Council,” said Rick Hills, a New York University law professor who has been following the case.

In defending the rule, city officials point to the city’s rising obesity rate — about 24 percent of adults, up from 18 percent in 2002 — and to studies tying sugary drinks to weight gain.

“People are dying every day; this is not a joke,” Bloomberg said of deaths from obesity. “This is about real lives, 5,000 every single year in America. 70-plus thousand across America. As a matter of fact, it is a world-wide problem. It is just as bad overseas as here.”

The judge acknowledged obesity’s effects and noted that those suing didn’t dispute that obesity is a significant health issue, but he questioned how much of the blame can be placed on sugary drinks. He found the regulation was “laden with exceptions based on economic and political concern.”

Critics said the measure was too limited to have a meaningful effect on waistlines. And they said it would take a bite out of business for the establishments that had to comply, while others still could sell sugary drinks in 2-liter bottles and supersized cups.